I don't know if any of you noticed this, but the dreaded ESPN is being dropped message began appearing last night during MNF. I noticed this again this morning with a commercial and on the bottom line. The message only says, "Customers" not specific to a provider.

I am also a dual subscriber with Comcast and these messages are not appearing.

Anyone have the scoop on the ESPN deal for D*? 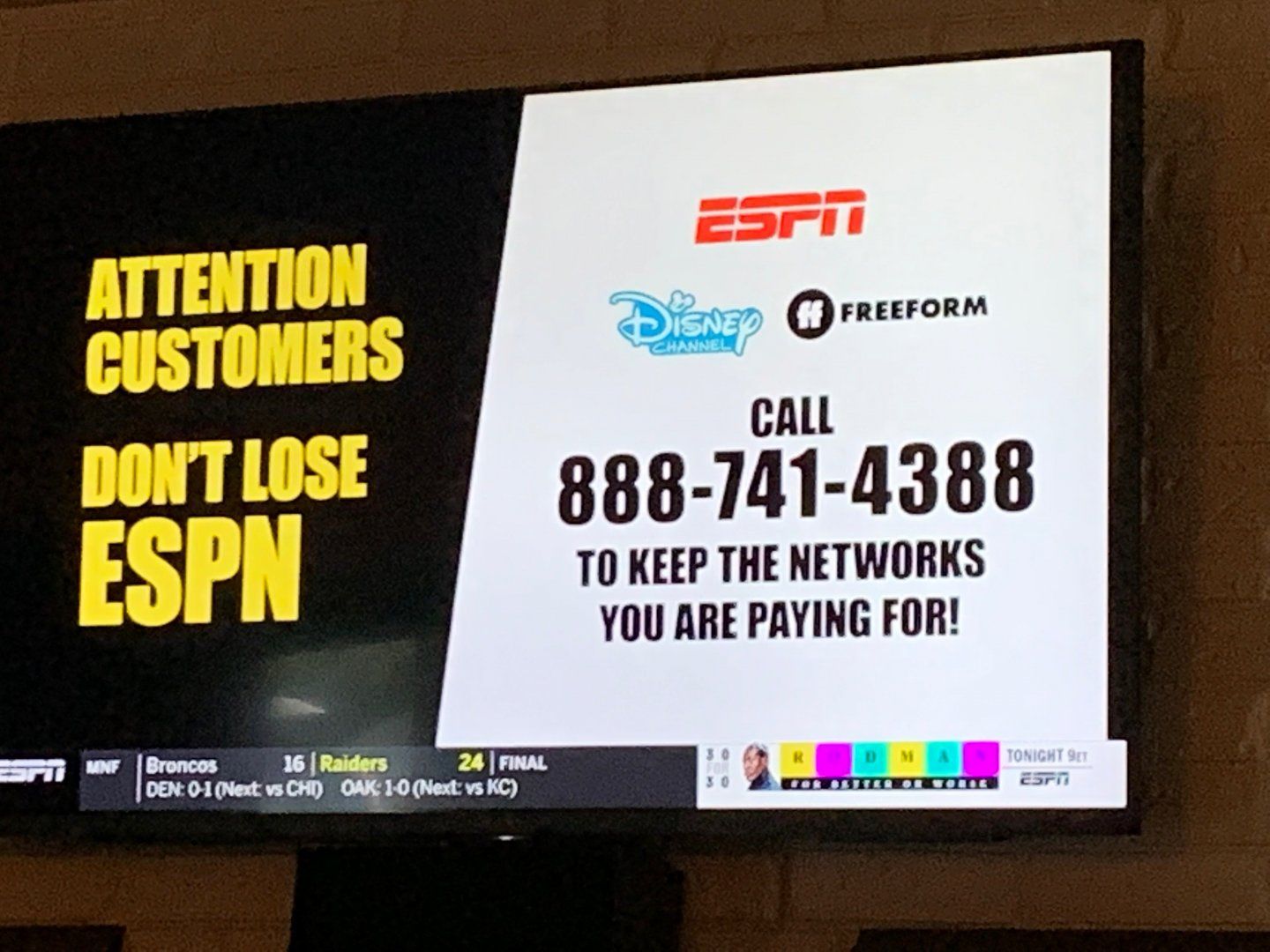 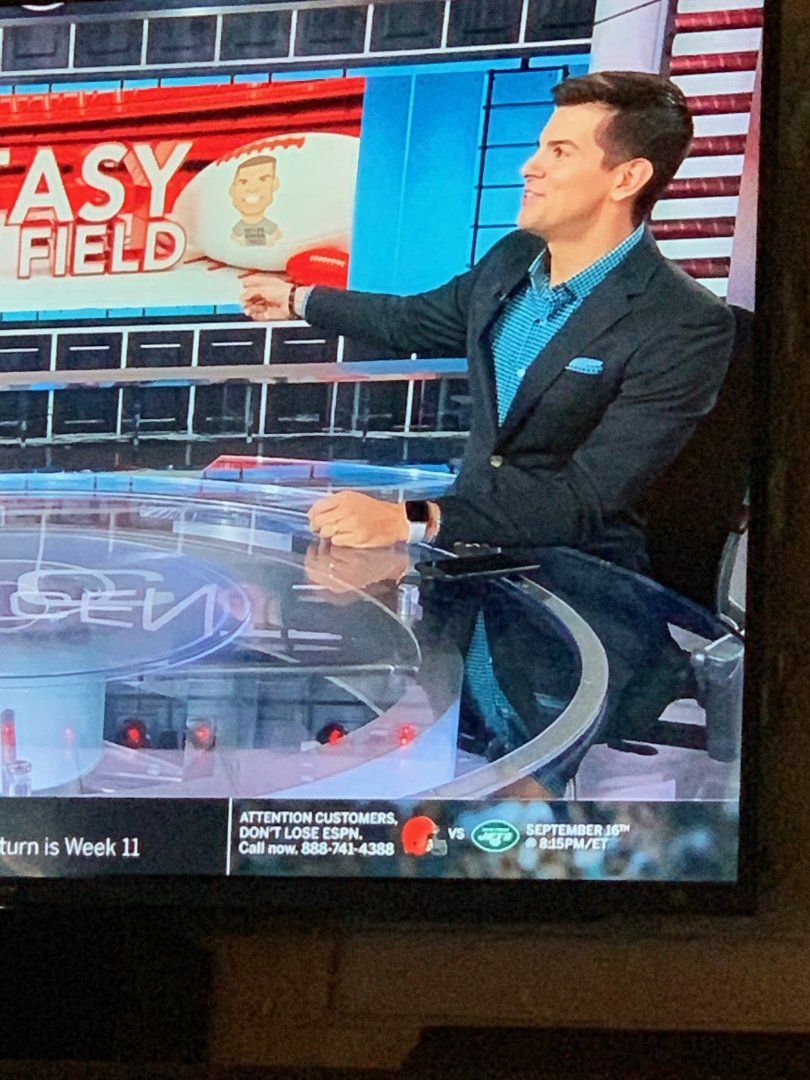 Interesting I would have thought DirecTV and Disney are on good terms as we just got ACC Network and cox comcast and others still dont have ACC network ...

Sent from my SM-N960U using Tapatalk


Sent from my iPad using SatelliteGuys

I found this which goes into a little more detail.

Espn will be off Dish before Directv. Mark my word!
Reactions: whitewolf8214 and dtv757

Claude Greiner said:
Espn will be off Dish before Directv. Mark my word!
Click to expand...

ESPN and DTV can't afford to lose each other. Too much money at stake.
Reactions: whitewolf8214 and dtv757

ESPN can be gone for good imo
Reactions: dtv757

Dish subscribers are not seeming that message

this could be ugly, if disney/espn want more money
Reactions: whitewolf8214
S

ESPN will not have the leverage they once had. The next 10 years of renewals could become a problem for Disney.
Reactions: whitewolf8214
M

espn is already the most expensive station
they have zero leverage in my mind, drop em, let thier revenue go down
Reactions: ETS and whitewolf8214

How much do people watch ESPN for anymore ?

The only time I watch ESPN is for the College football games.
Thats It.
Reactions: MikeI, Howard Simmons, whitewolf8214 and 1 other person
E

I only watch Formula 1/Formula 2 on ESPN. I see F1 TV is available for the USA, as ESPN is paying $0 for the F1 TV rights. The F1 TV & ESPN broadcast is the Sky Sports UK broadcast so would be exactly the same.

I'm in the NYC TV market and too far away from towers to get ABC signal with antenna. Only show I watch on ABC is General Hospital but I subscribe to Spotify which gets me Hulu free so I won't miss General Hospital
S

Well that's the thing. One guy watches it for college football, another for formula 1. Another for NFL. And so on. It is the fact it carries a lot of sports (but mostly because of the NFL and college football) that makes it cost so much, because each individual person who watches one of the things it carries is going to scream bloody murder if Directv drops it for even a few days. Then there are the ABC O&Os in some of the largest markets which will upset a whole other group of people with more college football games lost, and the new fall TV shows in a couple weeks. And don't forget Disney, how many parents will hear from their kids when they can't watch whatever it is that's popular on Disney Channel these days.

If it was just the Golf Channel that was impacted then people who watch golf would be upset, but people who watch other sports wouldn't care. If it was just locals they'd have a couple weeks grace until the new season. If it was just Disney it would mostly be parents with younger kids would be impacted. But it is all of them. This will be a major shitstorm if Directv doesn't come to a deal.
Reactions: whitewolf8214 and jamesjimcie
L

Jimbo said:
How much do people watch ESPN for anymore ?

The only time I watch ESPN is for the College football games.
Thats It.
Click to expand...

that should be its own pay channel for that price
Reactions: osu1991
S

mdram said:
that should be its own pay channel for that price
Click to expand...

And that. my friend, is the crux of the problem. The ESPNs are 5/16th of the price of basic cable (or DBS, I will just call it cable for ease of understanding). The other sports channels are another 3/16ths. That adds up to HALF of you cable bill, just passing through you to the cable company to the leagues, to the players. Those zillion dollar contracts aren't paid by the zillionaire owners, they are paid by Y O U.

And, under the old paradigm, "everybody" (well, actually well over 90% of folks) had cable, so "everybody" paid.

But, and for sports fans this is hard to understand, but it is true, there are LOTS of people who really don't care about sports at all.

So now Disney, et al, needs not $8 or $9 from "everybody" but, according to one report I read, something like $48 from people who actually like sports, which means it is unaffordable for all but the very rich.

that should be its own pay channel for that price
Click to expand...

I would say sports is the main reason I have cable/satellite. Otherwise I could prob cord cut and just stick to streaming services.
Reactions: I WANT MORE

longhorn23 said:
I watch ESPN for college football, college basketball, and the NBA.
Click to expand...

I watch it for the corn hole championships and high school basketball.