Looking at Switching to T-Mobile....any feedback?

Ok, so a switching topic that does not involve Direct or Dish I have been a long time Verizon customer and am looking at moving to T-Mobile, coverage wise looks good here in Michigan, researching them they offer some nice perks and there next promo involves Netflix. Any thoughts from those that have made the switch-The good, bad and ugly?

Thanks for your feedback

I plan to shift from AT&T to T-Mobile within a month. With their new 55+ plan, my bill will be less than half what it used to be. I was concerned about reception where we have an RV, and it turns out "T" is BETTER there. Every place we checked was equal to or better, reception wise. I bought a "T" SIM card and tested using an iPhone SE. I don't trust published maps.
Reactions: satjay

It looks to be a good plan. But for me, TMO and Sprint are just non-starters because of poor coverage in places I care about, including at my house.
Reactions: comfortably_numb and satjay

Don't make any decisions based on coverage maps.

The map in my area looks pretty good, but it is a fairly regular occurrence to lose (or not be able to acquire) signal. At work we had to install repeaters and some of them move the wireless traffic to our Internet connection so we're paying twice. We've also had more than a little trouble with texts taking hours to come through.

Talk to someone such as a coworker who has similar geographical movement patterns. Weak coverage is perhaps worse than no coverage.

I’m looking at switching to T-Mobile as well, but from Sprint. T-Mobile is the only one of the major four providers that I have never used and while I am not a fan of them, I do not like them as a company one bit or their wacko CEO, but that is not going to stop me from seeing how great they supposedly now are. I live in a rural area, and work in a rural area, where cell phone coverage is not the greatest from any provider. I don’t care about coverage at home so much as I very rarely use my phone at home, coverage at work is what I care about. And in the rural village that I work in, there just happens to be a Sprint tower nearby, one of the very first ones in the area to be upgraded to LTE in 2013 under the Network Vision project, and I’m able to pull in 80Mb+ speeds and am able to maintain a signal in our manufacturing plant.

We’ve got 40+ sales and service employees who live and travel all around the country and company phones used to be issued through Verizon and AT&T, but last year we switched over to Sprint and T-Mobile. I’ve gotten earfuls from people complaining about the coverage on the new providers versus the previous ones, but I let then vent and tell them I had nothing to do with the decision to switch. Thankfully I work for probably the only company on the planet where the IT guy (me) is not responsible for and has absolutely nothing to do with company cell phones, but people still come to me anyways with their problems. I can’t accurately judge T-Mobile performance at work, since all company phones are iPhones, and in my experience, iPhones have always had poorer RF performance than others.

After all the fees and taxes I pay Sprint $205. Two lines of completely unlimited voice, text and data, plus 3 GB on a dedicated mobile hotspot. And yes, it really is unlimited, it’s an old plan from before the throttling and limits on streaming video. I have no problem streaming as high as 1440p on my phone using LTE. Never activated my phones mobile hotspot because of the lack of the general lack of simultaneous data and voice, so I opted for a dedicated device in lieu of adding the mobile hotspot feature to my plan. I see T-Mobile raised their price from $100 to $120 for two lines. I’d rather have the $20 savings then a Netflix subscription I’ll never use, or have the One Plus add on instead. I would like Plus on my line, my wife really doesn’t care, so for two phones, one with Plus, it’s now $130, whereas a few months ago it was $105, but hey you now get Netflix, a $10 value.

EarDemon said:
Thankfully I work for probably the only company on the planet where the IT guy (me) is not responsible for and has absolutely nothing to do with company cell phones, but people still come to me anyways with their problems.
Click to expand...

I'm in the same situation. It helps that I don't have a company issued phone, but if it were up to me, they wouldn't have any data because watching YouTube, Vevo and Netflix typically isn't enhancing their job performance in any meaningful way. On the other hand, iPhones in particular would be pretty much non-functional without being able to transfer their bloated pictures onto iCloud. Expanding a $100 Android burner phone beyond 256GB is cheap but the iPhones can't be expanded so we have to buy more data and iCloud the support their picture-taking habits.

I can’t accurately judge T-Mobile performance at work, since all company phones are iPhones, and in my experience, iPhones have always had poorer RF performance than others.
Click to expand...

I agree with the assessment of diminished iPhone RF performance and that's why I'm so sensitive about signal (we get 0-2 bars at the office without the Cellspots). Our iPhone users even lose signal on I-5 in town on phones that are dash mounted. This never happened with AT&T. Our Washington (the state) offices seem to have pretty good T-Mobile coverage however so it is all about the service where you're operating. T-Mobile has bent over backward to keep us but we're slowly moving away as they just don't reach a lot of the areas our staff goes (including more than half of their homes).

The problem with T-mobile's coverage maps is that they are figuring in Band 12 coverage, which makes it look as if there are more physical towers than there actually are. T-mobile hasn't actually built-out their footprint at all; they're relying on Band 12 to penetrate areas that were previously unreachable. It's an absolute fact that Verizon and ATT have more physical towers in more locations than Sprint and T-Mobile. So, if you live in a rural area, my suggestion would be to do a "test drive" with T-mobile before you make the commitment.
Last edited: Sep 8, 2017

comfortably_numb said:
...It's an absolute fact that Verizon and Tmobile have more physical towers in more locations than Sprint and T-Mobile. ....
Click to expand...

I found CellMapper.net that uses user-collected data to map towers for the different carriers which includes Band data so you can filter by LTE Band in addition to carrier. Play around with it, it definitely is not the blanket coverage map you see on the carriers' web sites.

Here's T-Mobile in the Great Lakes region, of example. 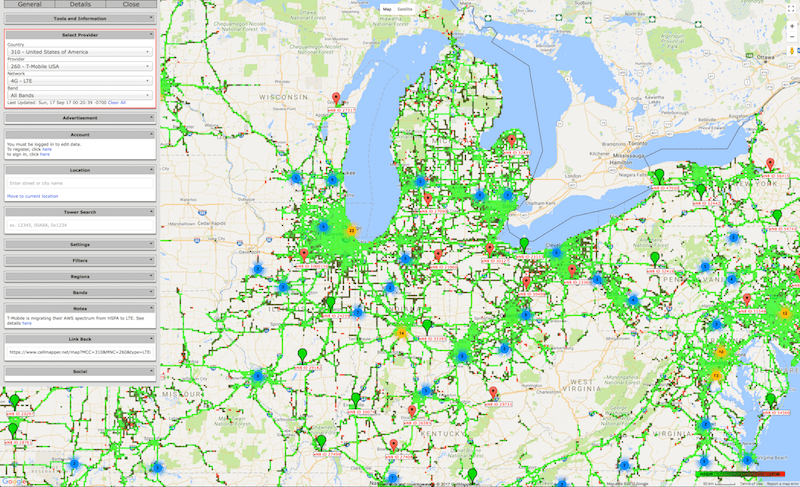 Looking at leaving AT&T for Sprint or VZW

AT&T or Verizon? Any differences?

Report: AT&T looking to buy Vodafone for as much as $82 billion