This almost happened to Evel Knievel once. He jumped in Chicago in 1972 and almost hit the lights.
Last edited by a moderator: May 28, 2014

Evel Knievel had a very close call like this back in 1972.He is coming down here in this photo but the film shows him getting very close to the lights. 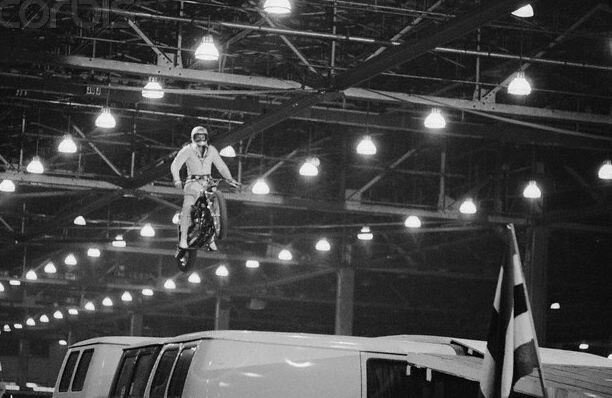 I miss the ABC Wide World of Sports events like Evel doing his jumps...

Genious! First time ever a motorcyle stunt combined with the thrills of the flying trapeeze!

Although looks like he may need some more practice on the landing part.

(Joking aside I am glad he is ok!)

I was friends with this man. Corey Scott. This happened in Miami.Corey had worked for the old Joie Chitwood Thrill Show before he went on his own. This was dangerous for sure but the way he was killed was a freak accident. It appeared that the motorcycle hit the net first and pushed Corey off the net. I had just seen him about a month before this. He had done this stunt 4 times before with no problem. But this jump killed him.
Last edited by a moderator: May 27, 2014

This is Harley-Davidson's first electric motorcycle

M
And the award for the dumbest crook goes to...