I wrote an article for RetroJunk on EA Spors hockey games.

Since it'll be a while before it gets approved, I'd like you guys to check it out.

No link- these are my actual words, thoughts, memories, stories and pictures.

As a young kid with a Sega Genesis, I was fortunate to inherit the system with some of the best sports-themed video games of all-time.

The baseball games were good, but not great.

The football games were exceptional.

The basketball games were decent, but there were more bad games than good ones.

There were also the other game/system franchises I like- The Triple Play franchise for the PlayStation and the EA Sports NHL PlayStation series were solid.

Then... there was the the EA Sports NHL series for the Sega Genesis.

I was a huge hockey fan (Sabres fan my whole life, BTW.), so these games were really something.

NHL Hockey for the Genesis was the first of this seven-game series (how fitting) of games.

It was a very innovative game- a north-south angle (you don't have to move from side-to-side to get to the goal, which was used for all the games), great passing and speed, and it had real teams and real players (However, you had to identify them by number and position, for names weren't available at the time).

At the time, there were roughly only 22 teams in the NHL (San Jose was an expansion team- no Senators, no Wild, and the Avalanche were still in Quebec)

It was so fun, yet so simple- moving up-and-down, crisp movements of the player, updates of other games when you were in the playoffs, and a zamboni between periods!

Oh, and let's not forget the fights- you can change the rules so that no matter how many fights your team gets in, you never have to go to the penalty box.

Also, here's a neat trick: if you're baited into a fight and penalties are on, don't do anything. Let him veat you up- this can get him thrown into the penalty box and you don't- this results in a five-minute power play!

But, that was only the start... 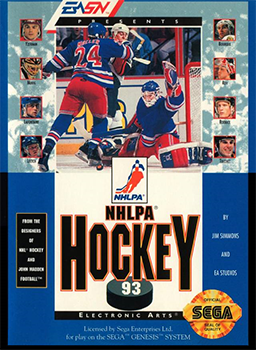 (Here's a little back story: This game was released on New Year's Eve 1992- that same night, I went to a Sabres game in Buffalo- I lived there until my family moved to Wisconsin in 1994- where Buffalo scored 12 goals and one of my heroes- Alexander Mogilny- scored a hat trick. After the game, my dad drove straight from the Aud to a video game store so I could buy NHLPA 93. Talk about ringing in a happy new year!)

This game had a couple of flaws- the players were not as fast as the previous game, the goalies weren't exaclty world-class, and fights weren't as easy. In the old game, it was easy to dodge your opponents, but in this game- not so much.

Nonetheless, it has actual player names (though no team names, just citites) and scoring goals is pretty easy,

For instance, consider this game I played:

Sabres vs. Islanders in Long Island.

Mogilny has 8 goals and 15 points.

Patty Lafontaine had 4 goals and 11 points.

Dale Hawerchuk had a hat trick and 6 assists.

On another occasion, Mogilny had 6 goals in the first period alone.

If you can figure out how to move the puck and skaters and engage in high-scoring games, you'll master this game in no time.

This was a great sequel, but the next one that was to follow was, quite simply, beyond unbelievable.

Quite simply the greatest video game I have ever played- and don't just tell me- many hockey fans love this game.

(Have you seen Swingers? Something about making heads bleed...)

Fittingly, this game was first released on my birthday- March 15, 1993. Talk about getting the perfect gift!
(Actually, the perfect birthday gift for a younger me would have been Angela Watson holding a cake and singing "Happy Birthday" in a hot red dress, but that's another story for another day...)

Anyway, this game was superior to the sequel in many a way.

The players were a lot faster, passing and skating were all superb, and goalies were much better. Oh, and it had a one-timer, which made it easier to shoot from long-range.


Also, I have to be honest- people talk about Roenick, but Alexander Mogilny in NHL 94 was the greatest sports video game character of all-time.

I always had high-scorers- if he got a hat trick, that was a bad night. I usually averaged six goals a night with him.

However, there's no fighting- nothing is perfect, after all. Still, you can hit all you want, and that can prove very beneficiary. The harder, the better!

Combine all this, and you have a damn-near flawless hockey game!

However, as is the case more often than not, once you hit a glass ceiling, you can only go downward.

NHL 95 was the equivalent of having to follow up something awesome- it was flawed, it wasn't horrific, it was playable, but it wasn't its precedecessor.

There were some new features- you could play an entire season, and you could trade players or create new ones. Also, you could fake a shot, use drop passes, and even block shots.

However, this game did have some flaws- the skating was not as crisp as in previous games, and the goalies were much harder to score on, whereas previous games were usually a high-scoring, outscore-the-other-team shootout.

Obviously, not as good as the prior game, but still playable. BTW, this game is personally not recommended for impatient or cocky players who like to run up the score and put up double-digit goal numbers. Checking and patience will win on this version of the series.

A year later, there would be vast improvements made to correct these flaws.

The skating returned to the crisp and dynamic variety of old, fighting returned after a two-game absence, and goalies were more beatable- better than the last game, but not the sieves of old.

Another interesting addition: There were now major penalties (4 minutes instead of the usual 2) and the double minor penalties.

(One irony- this game included the old Quebec Nordiques, though by the time the game was released, they had already moved to Colorado)

I can't go into great detail about this game, but it was an improvement over the previous game.

NHL 97 (released on Halloween- nice trick-or-treat gift, huh?) was able to improve slightly from the last game- this is also a highly playable game, but only on the Sega Genesis. The Playstation and Saturn versions aren't too good.

It basically plays the same as NHL 96, but with one big addition: International teams, such as USA, Canada, Russia, and 2 European All-Star teams.

Also, there was a Skills Competition, where newbies could learn certain skills that are necessary to master this game. These include the hardest shot, goalie breakaway practices, and accuracy shooting (those targets aren't easy to hit, BTW).

This was good- it improved, made some nice additions and kept the same formula as the last game.

NHL 98 was the final EA Sports hockey game on the Sega Genesis system.

The series goes out with a nice bang- keeps the same formula of crisp and smooth passing, skating, and shooting, goalies that range from stonewalls to sieves, and the additions of the previous year.

One final addition: this time, the International teams include all the major countries that can be classified as international hockey powers/contenders.

Overall, a good game to wrap up the series of outstanding games, with a few tweaks to nicely conclude the great series.

It's only fitting that this Sega game series from 1991-1998 lasted as long as my favorite show, "Step By Step."

They were key roles in my younger years, with enjoyment, admiration and something to dream about (Karen at night, winning the electronic version of Lord Stanley's Cup by day.) (Ah, the impossible dreams of my younger days...)

All in all, these were games that were more good than bad. Whatever flaws there were, other games picked up the slack and improved on them.

Great games, great series- They were truly "In the Game."

Here's to you, EA Sports!

What do you think of my article?
Reactions: satjay and c-spand

NHL 96 on the PC remains one of my favorite sports games of all time. Good graphics (For the time) a good amount of analysis and speech, a liberal trading system, and modem play capabilities. I remember also how cool I thought it was how right before the game they'd sing the last line of the national anthem ("And the home of the brave") but if you were playing in Canada they'd do the Canadian anthem ("Oh Canada we stand on guard for thee") I should see if I can dig that up and see if I can get some decent DOS emulation, although without Joystick support that could prove quite annoying.

they had a contries only version of nhl 92 i guess as well
Reactions: c-spand
C

I remember using Belarus all the time. I still have my playstation.

An Article I wrote on RetroJunk

S
The Road to the World Series...