I'm posting this as a curiosity for most, since it would likely only be of functional interest to a few fellow RV'ers with a similar setup.

When we bought our then 12 year old motorhome several years ago, it came equipped with a Winegard RM-DM46 manual crank up and aimed dish installed on the roof that's functionally equivalent to an 18" Dish 300 and non-DP LNB. We normally use a portable tripod mounted Dish 1000.4 with either an eastern or western arc DPP LNBF installed depending on our location. But occasionally, for one night stops on our way to a destination, we found we could quickly raise and aim the small roof dish to grab a single satellite signal for our VIP211K receiver to watch a few select programs without needing to set up and aim the tripod 1K4. Then we upgraded to Hopper 2, and not surprisingly, found that the roof dish was no longer usable. A check switch wouldn't even complete with it connected, so we just used the 1K4 as needed.

Fast forward a year or so, and I was talking to a Dish tech that was working on an RV Hopper 3 install nearby, and mentioned the roof dish. He suggested that if I could install a single DP LNB on the arm and align it to the dish correctly it might work as a pseudo wing dish by connecting it to the input port on a spare 1K4 LNBF, and connecting the LNBF outputs to a Solo Node to the Hopper. I said I would give that a try when I had a chance to get the DP LNB and if I could modify the RM-DM46 arm to accept it. Before he left, he dropped off a single DB LNB that he had in his truck. Jump forward to this week, and I finally got around to figuring out how to modify the existing arm to accept the DP LNB, finishing it yesterday. Today I hooked everything up as directed, but once again, a check switch would not complete. I was thinking I may need a 33 or 44 switch, but just for the heck of it, I connected the roof dish to my signal meter and dialed in the 110 sat, and then connected the dish directly to the Hopper 2. I was pleasantly surprised to see the 110 sat show up on the dish pointing page with a decent signal strength! I rebooted and ran another check switch, and this time it completed, showing only the 110 sat feeding a single tuner. I exited out and tried tuning the Hopper to channel 111 that I knew existed on the 110 sat, and it popped right in! Yea! The EPG didn't update, but I didn't try to force it either, since I was switching back to the 1K4 for normal viewing anyway.

The first photo is of an unmodified Winegard RM-DM46. I forgot to take one, so I "borrowed" the photo from Winegard. The second photo is the DP modified dish, and third is a screen shot of the aiming screen. I am getting a "Reception error" on that screen, and I assume that's because of the DP being limited to single tuner. 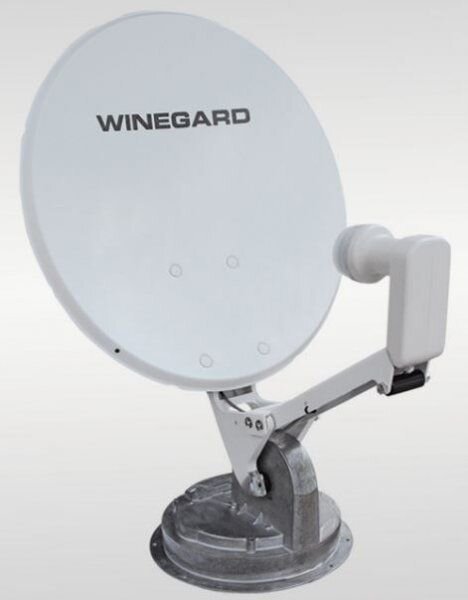 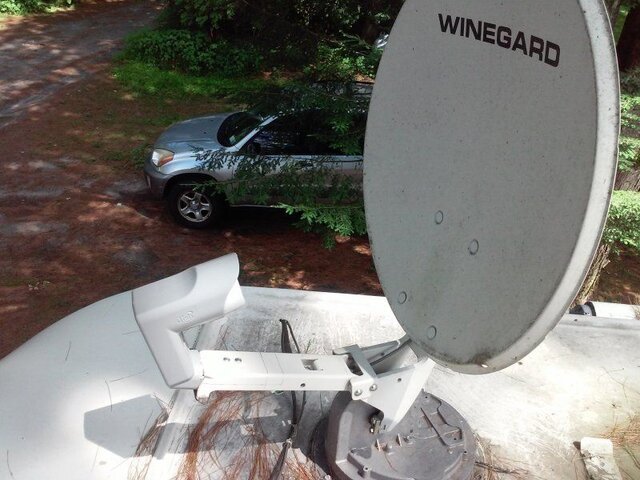 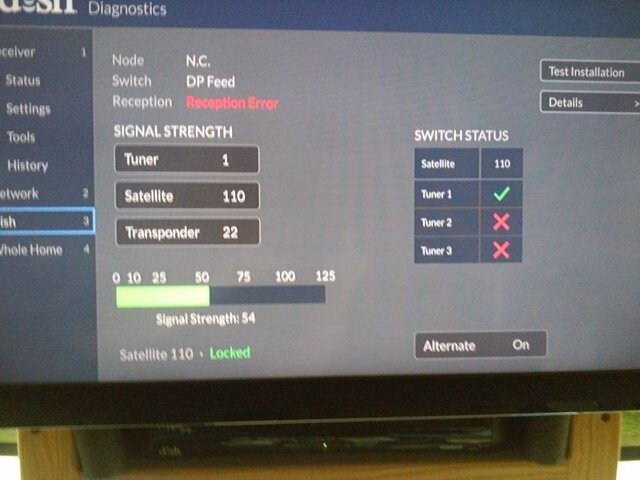 You would need the DPH LNB for it to work with the H3...

Some really good advice for Dish in RVs.
Reactions: charlesrshell

I agree, the DPH42 should take care of it. I've just added an Amazon Firestick and the Dish Anywhere app to our primary TV, so I may not bother fiddling with the roof dish much more anyway. It was mostly just an exercise to see if it would work. It still could be useful though, if we happen to land in an area with poor cell service for our Internet connections.

Just to update this thread a bit, with more playing with this setup. I did find that the Hopper is only tuning some of the channels in the updated EPG, not all of them, My guess is that the Hopper doesn't switch the DP's polarity as the channels change. Today I tried connecting the DP first to the input port of a spare unmounted DPP eastern arc LNB that I connected to a spare Node. A switch test hangs instead of completing with that setup, so I then tried a borrowed DPP33 in place of the EA LNB, with the same result. Oh, and a power cycle reboot didn't change anything, it still hangs on the switch test. So okay, now I'm baffled... Any suggestions?

I do have a Hybrid modified Trav'ler but I use a tripod for the EA. With a Super Buddy meter and an Align-A-Site, tripod setup is minutes and I would mess with a single LNBF dish for anything.

My regular setup is a tripod mounted 1K4 with either an EA or WA LNBF installed as needed for best aiming. It rarely takes me more than 15 minutes to set up and aim it. The RM-DM46 is just an experiment using odds and ends I had available so far, to see if I could make it work for some of those quick one night stops enroute to a destination. If it works, that's great, if not, no harm done, and I've had fun playing with it. We park in way to many treed sites to justify the $1500 or so cost of a Trav'ler.

Run the check switch with nothing connected, and save the results. Then rerun it with the EA lnb through the node.

When I ran a check switch with nothing connected, it also hung without finishing. I don't know if that's unique to the new CUI on our HWS or not, because I don't recall doing it with the old UI or needing to when switching LNB's. I use to have to do that sometimes when switching LNB arc sets on our previous VIP211K though.

It should take about an hour to run the first test. You want it to fail.

Ok, I'll give it another try ASAP. At least one of the other attempts that didn't complete was left sitting for about an hour and a half with no change.

Make sure the Hopper is unplugged from power before unscrewing the Coax. I may or may not have accidentally fried a couple receivers in the office one day, being a cocky bastard, and teaching my employees how to identify certain signal failure queues.

Yes, that's how I did it with the 211K. I have to move the RV off my site today to let a tree crew do some cutting for a day or two, so I wont have power unless I leave the onboard generator running. I'll let more testing wait until I'm back on utility power when they're done.
Previous Next
Share:
Facebook Twitter Reddit Pinterest Email Share Link