Best way to remove a rusted out RG6 cable from LNB

A fine needle nose pliers. If that dos not work a new lnbf is less than 15 bucks.

SatPhreak said:
A fine needle nose pliers. If that dos not work a new lnbf is less than 15 bucks.

Sent from my SM-N900W8 using the SatelliteGuys app!
Click to expand...

Sorry, I thought you were talking about ku. You should get a c band lnbf for less than $60.

I had 1 like that.
hit it with WD40 for a few weeks and pulled it out with a fine needle nose plyers.
I use dielectric grease on the connectors now.
Reactions: KE4EST and Titanium

dtvh8r said:
A rusted out cable core broke and is stuck on an LNB need advice on best way to get it out the rustted out core of the lnb

I had that happen once and was able to work it loose with a fine sewing needle.

I thought most RG6 has a copper center wire but I suppose yours was copper-cladded steel. Anyway my first thought was to take a small finishing nail, grind or file the end so it is mostly flat, put a very small dot of super glue on it, press it against the rusted end of the wire, and when the super glue dries pull on it. However the risk is if you use too much glue you might actually glue the rusty wire in place. On the other hand if that did happen you might then be able to drill some of it out with a very small drill bit, if you can come in very straight. The undesirable part of that is the potential of metal shavings against the internal circuitry, and of damaging the LNB if you are too aggressive with the drill or don't come into the end exactly straight (a drill press would probably make it easier). If you are not in a huge hurry and have some way to hold the nail firmly in place, a small dot of epoxy would probably grip a bit better, but you want to wait long enough for it to fully harden before you pull on it.

My second thought is that if it really is steel wire with copper cladding, try a very strong magnet if you have one. Stick it on the end of the connector and work it around a little, maybe after applying a small amount of penetrating oil or WD-40. There's an off chance the magnetism might pull it out.

My third thought is try a small pair of tweezers, but heat the tip first so it can melt the plastic in the end of the connector just a little before you attempt to grab the wire (probably will need to wear gloves if you don't want burned fingers).

I don't have a lot of confidence in any of these; I'm just throwing ideas out there.

dtvh8r Could you show some picture of your LNB? If you can not manage to remove piece of wire in the drum you could probably disassemble LNB and change the drum. I have some of them available, you only pay shipping. If your LNB looks like om my picture, then unscrew nut from the F-drum and remove the body of the LNB. 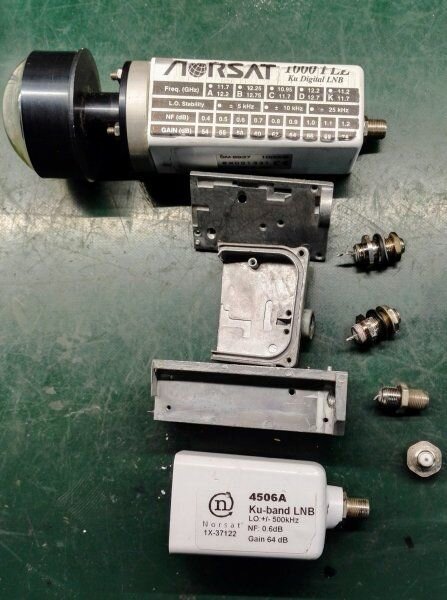 I agree, if you get it out the connection in the lnb will still be corroded.
Click to expand...

I had this happen when I took down my dish. I tried carving out some of the plastic and letting it sit in PB blaster for days on end, and no go. Even mini vise grips wouldn't budge it. So I spent the $20 or so on a new lnb.

How to convert from 4DTV to FTA box out on the dish?