Baby, It's Cold Outside

PHOENIX — For more than a half century, Bil Keane's clever "Family Circus" comics entertained readers with a mix of humor and traditional family values, intentionally simplistic because the author thought the American public needed the consistency.

Keane, who started drawing the one-panel cartoon featuring Billy, Jeffy, Dolly, P.J. and their parents in February 1960, died Tuesday at age 89. His comic strip is featured in nearly 1,500 newspapers across the country.

Jeff Keane, his son, said his father died of congestive heart failure. Bil Keane has a home in Paradise Valley, near Phoenix, but it was not immediately clear where he died.

Keane said in a 1995 interview with The Associated Press that the cartoon endured because of its consistency and simplicity.

"It's reassuring, I think, to the American public to see the same family," he said.

Although Keane kept the strip current with references to pop culture movies and songs, the context of his comic was timeless. The ghost-like "Ida Know" and "Not Me" who got blamed for household accidents were staples of the strip. The family's pets were dogs Barfy and Sam, and the cat, Kittycat.

"We are, in the comics, the last frontier of good, wholesome family humor and entertainment," Keane said. "On radio and television, magazines and the movies, you can't tell what you're going to get. When you look at the comic page, you can usually depend on something acceptable by the entire family."

His friend Charles M. Schulz, the late creator of "Peanuts," once said the most important thing about "Family Circus" is that it's funny.

"I think we share a care for the same type of humor," Schulz told The Associated Press in 1995. "We're both family men with children and look with great fondness at our families."

Keane said the strip hit its stride with a cartoon he did in the mid-1960s.

"It showed Jeffy coming out of the living room late at night in pajamas and Mommy and Daddy watching television and Jeffy says, 'I don't feel so good, I think I need a hug.' And suddenly I got a lot mail from people about this dear little fella needing a hug, and I realized that there was something more than just getting a belly laugh every day."

Even with his traditional side, Keane appreciated younger cartoonists' efforts. He listed Gary Larson's "The Far Side" among his favorites, and he loved it when Bill Griffith had his offbeat "Zippy the Pinhead" character wake up from a bump on the head thinking he was Keane's Jeffy.

Keane responded by giving Zippy an appearance in "Family Circus."

In later years, Keane continued to produce "Family Circus" with the help of his youngest son, Jeff. Keane sketched out the ideas, characters and captions and sent them to Jeff for inking.

Born in 1922, Keane taught himself to draw in high school in his native Philadelphia. Around this time, young Bill dropped the second "L'' off his name "just to be different."

He worked as a messenger for the Philadelphia Bulletin before serving three years in the Army, where he drew for "Yank" and "Pacific Stars and Stripes." He met his wife, Thelma ("Thel"), while serving at a desk job in Australia.

He started a one-panel comic in 1953 called "Channel Chuckles" that lampooned the up-and-coming medium of television. (In one, a mom in front of a television, crying baby on her lap, tells husband: "She slept throught two gun fights and a barroom brawl — then the commercial woke her up.")

He moved to Arizona in 1958 and two years later started a comic about a family much like his own. Keane and his wife had a daughter, Gayle, and sons Glen, Jeff, Chris and Neal — one more son than in his cartoon family.

"I never thought about a philosophy for the strip — it developed gradually," Keane told the East Valley Tribune in 1998. "I was portraying the family through my eyes. Everything that's happened in the strip has happened to me.

He is survived by the five children he had with his wife Thelma "Thel" Keane, who died of Alzheimer's disease in 2008 and was the inspiration for the Mommy character in the comic strip.

When his wife died, Keane called her "the inspiration for all of my success. ...When the cartoon first appeared, she looked so much like Mommy that if she was in the supermarket pushing her cart around, people would come up to her and say, 'Aren't you the mommy in 'Family Circus?'"

She also served as his business and financial manager.

Arizona and Keane had a mutual influence on each other. Keane's work can be found all around — from children's centers to ice cream shops.

Likewise, Arizona could also be found in Keane's work.

A 2004 comic saw the family on a scenic lookout over the Grand Canyon with the children asking "Why are the rocks painted different colors" and "What time does it close?"

Although Keane drew the funnies, his work was not necessarily intended to be comical.

His goal was this: "I would rather have the readers react with a warm smile, a tug at the heart or a lump in the throat as they recall doing the same things in their own families."

The funeral will be next week. To attend, you go out the back door, rap your fist on the tree, walk along the top of the fence, stop by the Ice cream vendor, go into the park, swing twice on the swings...

Sorry to see him go.

I enjoyed reading Family Circus in the funny pages of the local newspaper for many years whlie growing up. Througout the years I would occasionally checkout the comics section and Family Circus was timeless...always brought a warm smile to my face.

Baby, It's Cold Outside

jayn_j said:
The funeral will be next week. To attend, you go out the back door, rap your fist on the tree, walk along the top of the fence, stop by the Ice cream vendor, go into the park, swing twice on the swings...

I always used to read it when I was a kid, and even later....

He will be missed. 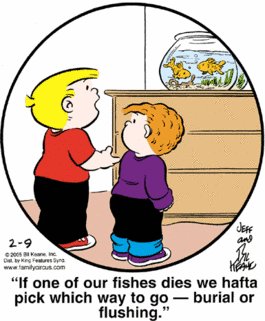 One of my favorite comics. Thoughts and prayers to his family. RIP.

They need to keep this Comic Strip going , just like Peanuts. It's a classic.