Also, had problem with the series "Gone". Apparently was originally aired in Australia. First airing of an episode shows as new with episode date same as airing date. Additional airings show with a date of 01-01-18. This issue has been a long standing problem.

BostonMA said:
...A couple of my recordings were the wrong program.
Click to expand...

I had the same problem, particularly with recordings of stand-up comedy specials from premium channels.
B

Timers on programs that replay episodes numerous times may cause problems.

I had to lower the priority on "The Curse of Oak Island" twice in the last few weeks. In both cases, had three timers scheduled at the same time on my Vip612 when Oak Island was skipped due to priority it locked out the second timer as well.
B

Bad idea to change the frequency of a timer. Tried it a couple of times recently to optimize my recordings. Better to delete and re-enter.
Reactions: crodrules

Overall I have to say my VIP's have been recording everything as intended, and guide issues have been greatly minimized. There are episodes of some shows with no information sometimes etc but things for me are much better.
However there is one newer wrinkle.
Some shows package older ones, maybe with added content, maybe with left out scenes etc. When that is on the schedule it presents itself as new. That isn't a fault or maybe even wrong I'm sure the content provider wants it presented as new. Those shows in the description most often have what date they were first aired and that could be a clue it was not really new. That's how it is with the American Pickers so I would not have that episode record. After a couple of weeks I realized the description showed 2018 but the advertisements were for a new episode that week. Sure enough now it seems ALL episodes say 2018 even all the new ones in 2019. It's been that way for weeks, and also sometimes for Pawn Stars.
Reactions: TheKrell and charlesrshell

Faux reality series are not new, ever. Actually, it's getting pretty old.
Reactions: joegr, TheKrell, crodrules and 1 other person

dare2be said:
Faux reality series are not new, ever. Actually, it's getting pretty old.
Click to expand...

What? Next you're going to tell me WWE is fake?
Reactions: dennispap, wormil, TheKrell and 3 others

Tampa8 said:
Some shows package older ones, maybe with added content, maybe with left out scenes etc. When that is on the schedule it presents itself as new.
Click to expand...

I have this issue a fortiori with the Travel Channel's Expedition Unknown. Except it never shows when the original show was broadcast. I wasted my time last night watching 3/4 of the "new" episode (It even said "new" right in the video), before I decided the new content, if any, was insignificant. Even the first one was insignificant with a semi-circular rock wall standing in for the alleged "lost city of the Kalahari".
Reactions: Tampa8 and joegr

Naked and Afraid, and Naked and Afraid XL are both jacked again. And surprise surprise, I had to make another another BattleBots timer because the 3 leftover from last year weren't working this year.

When I was flipping through the guide last night, I noticed that an episode of Family Feud on Game Show Network was listed as "Family Feud (Harvey)". While I appreciate them trying to differentiate the episodes hosted by Steve Harvey, they are not consistent with this. I checked the description for the episode immediately following that one, and it looked like it was from the same season (the same family was listed in the description) but the title was simply "Family Feud" instead of "Family Feud (Harvey)". I do not record this show, but I can imagine how that inconsistent listing might screw up the DVR timers. Even with two or more separate timers, to try to make sure every episode records, different episodes from the same season might end up in different folders. So, I hope this gets fixed, for the sake of Family Feud fans everywhere.
Reactions: joewhite57

Does anyone know the age of those family feud episodes? It’s my wife’s favorite to watch, but damn! I think I recognize many families!

joewhite57 said:
Does anyone know the age of those family feud episodes? It’s my wife’s favorite to watch, but damn! I think I recognize many families!
Click to expand...

Yes, even with season, episode number, and date listings in the description, it can be hard to tell how old the episodes actually are, since the descriptions do not seem to be accurate. Just looking at tonight's listings, at 7 PM Eastern, the Fitzgerald Family vs. the Kennedy Family (episode 438) was from 8/16/18. However, the very next episode at 7:30 has the Kennedy Family (I am assuming the same family from the previous episode) vs. the Shearer Family (episode 273) from 6/24/18. I doubt that this is accurate, since it would seem odd that two appearances by the same family had such a long gap between dates. On the other hand, it also seems odd that there were over a hundred new episodes over such a relatively short time span, so the episode numbering is probably not right, either.

I suppose it is possible that there was more than one family with the same last name in each of these examples. However, it seems like too much of a concidence that they would be airing back-to-back, unless someone was scheduling it that way on purpose. I realize that providing accurate season, episode number, and date information for game shows is not exactly a high priority, but it would be nice if this were more accurate, just for the sake of DVR users.

Having said all that, I prefer to watch Family Feud on BUZZR, channel 245, where I know I will see a really old episode hosted by Richard Dawson or Ray Combs.
Reactions: Howard Simmons

If it's Family Feud on GSN, then it's Harvey. Putting Harvey in the title is redundant.

The corollary to that is, if you tune to GSN, there's a 50% chance it'll be showing Family Feud.
Reactions: crodrules

dare2be said:
If it's Family Feud on GSN, then it's Harvey. Putting Harvey in the title is redundant.
Click to expand...

That is what I thought, which is why I thought it was so odd when I noticed that in the title for one episode last night. Having said that, I just checked the guide for the rest of this week, and there are not any more episodes listed that way, so maybe it was just a one-time glitch.

Has anyone else noticed that tonight's listings on HDNet Movies are misspelling Ace Ventura as "Ace Venture: Pet Detective" and "Ace Venture: When Nature Calls"? Meanwhile, the listings for CSONY (Spanish-language channel 864) get the spelling right for both movies. 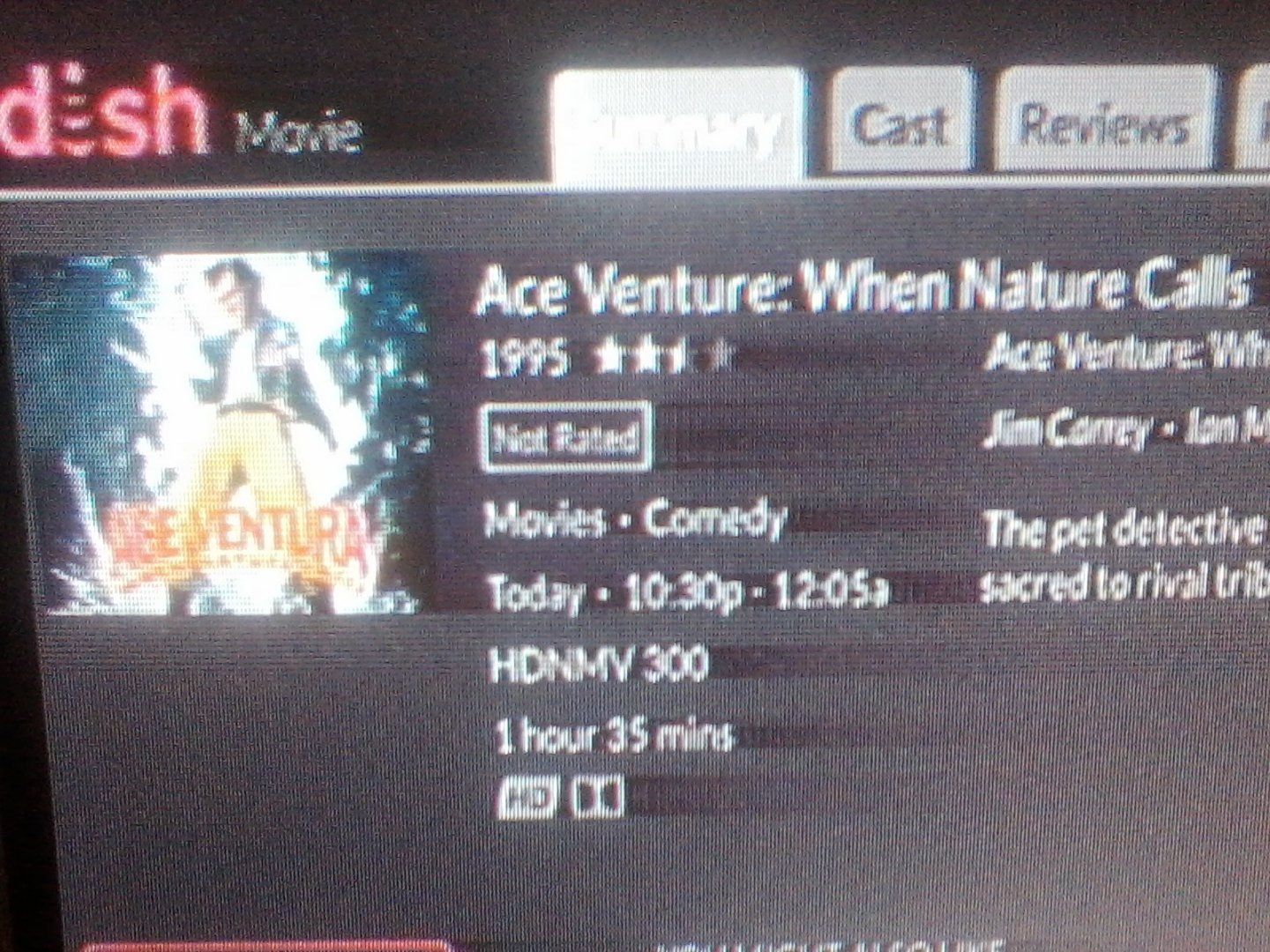 Came up with interesting guide issue today. "Reef Break" shows as duplicate event on Friday 9/13, thus not set to record. As I look at the entry on the guide, the episode number is the next in sequence from tonight's and the original air date is 9/13. Go figure.

Just noticed as I am going in to restore so that it will record, that it does have a record date of 9/12, don't know how that factors in.

What you see is the display data. The meta data that actually tells the receiver what it "needs" to know might be different.
Reactions: SandFarmer, crodrules, TheKrell and 1 other person
D

That won't help with this issue, since most other providers also use Tivo (formerly Rovi) guide data.

Came up with interesting guide issue today. "Reef Break" shows as duplicate event on Friday 9/13, thus not set to record. As I look at the entry on the guide, the episode number is the next in sequence from tonight's and the original air date is 9/13. Go figure.

Just noticed as I am going in to restore so that it will record, that it does have a record date of 9/12, don't know how that factors in.
Click to expand...

Mine now shows it as new airing next Friday. I think it normally would have came on next Thursday but it is now getting bumped by some debate.
You must log in or register to reply here.
Previous Next
Share:
Facebook Reddit Pinterest Email Link

Who Read This Thread (Total Members: 107) Show all