That's a lot of claws!

I finally took the leap and bought a proper pcie tuner card. I just installed a TBS6902 dual tuner card to go along with my two WinTV ATSC tuners and WinTV Nova. Ideally I'd like to have both FTA and OTA in one program that can DVR them.

I've been using Windows Media Center for several years for OTA. It should technically work with the TBS card, but would have no program guide, and no manual recording settings. I've also been trying out SichboPVR, which is working for the most part but won't drive the HH-90 for some reason. The card CAN drive the motor using DVB Dream, so the issue must be Sichbo related (have been tweaking its settings with no luck).

Does anyone know of a relatively easy-to-use program for both FTA and OTA? I don't care if it's a pain to set up, so long as it's easy enough for the wife and I to operate after it's set up.

And, since everyone loves photos... 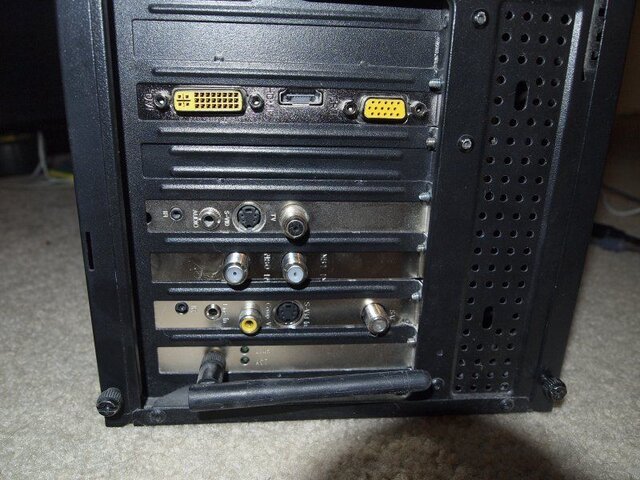 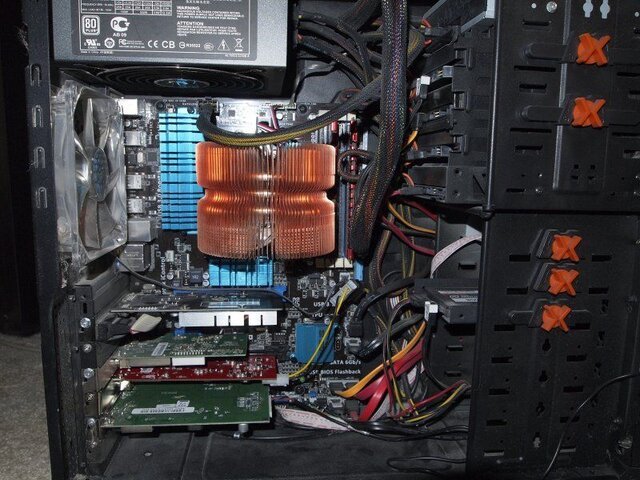 I have been getting away from using the HTPC for most of my viewing, but I'm still using MyTheatre ( DVBCore/MyTheatre Homepage ) Simple to use and intergrates ATSC and DVBS cards seemlessly. But very few cards will completely function with it. Like the TBS, there is no motor control. The Hauppauge cards will work ok. I use a TeVii DVBS2 card. DVBDream is supposed to support both FTA and OTA and one of these days I may try it again but I find the program very unstable to use.

I can't comment on motors because all my dishes are fixed in one position but if you are comfortable using Linux (Ubuntu Server or Debian) then you might want to give Tvheadend a try. I do know that it works with TBS cards IF you have built and installed the TBS drivers. The one drawback to using TBS stuff is that their drivers are not included in the Linux kernel, so each time there is a kernel update you need to rebuild and reinstall the drivers. There are also some small quirks about TBS cards such as that you want to try to make sure they aren't sharing an interrupt with anything else. There is an article that explains a lot of this but unfortunately it's for an older version of Tvheadend than the current one, but still you probably will find some useful information there.

However if you are not that comfortable in a Linux environment then you might want to try MediaPortal. I haven't looked at it in probably three or four years now, but it was fairly decent software if I recall correctly. There are actually several choices for Windows users but I don't think all of them will work with TBS cards, but I may be wrong about that. I know NextPVR is popular with some folks. I don't know which ATSC tuners any of these devices support.

The biggest issue with all these programs is first of all getting them to recognize and use your tuners (which may be a snap, or in a worst case may be nearly impossible, depending on your hardware and software), and then figuring out how to configure the software. The problem with most of these programs is they have far too many settings, and while you are usually safe leaving the ones you don't understand at the default settings, that's not always the case. Plus new versions of the software introduce new settings, some of which are obvious in what they do, but others will leave you scratching your head.

I will say that Tvheadend (with Kodi on the front end) is probably easy enough to use once you get it set up, but there are a few people (typically of one gender - guess which, I'd probably be in trouble if I named one

) that seem to have a problem using a remote if they have to press more than one or two buttons to get to what they want to watch. If your family members call you to tune the channels on the TV for them, then nothing you use will be easy enough for them. It's not rocket science, but if someone has the mindset that they shouldn't have to learn how to control the TV, then about all you can do is connect the TV to an antenna and tell them "you get what you get", unless you want to be the TV navigator in your family. But if your family members are reasonably intelligent people then controlling Kodi shouldn't be an issue once you get past the initial learning curve, and really the biggest learning curve is for configuring the PVR backend; Kodi is pretty easy to use once you have the proper PVR addon installed and configured (particularly if you pick a decent skin, which would NOT be the Kodi default IMHO). Note that MediaPortal also has its own frontend software, so you don't necessarily need to use Kodi with MediaPortal.

The last time I used a PC, it was with a model 5000 dish receiver with the digital channel 3 HD adaptor.

Dish actually had a HD receiver that output HD via unencrypted coax.

That's a lot of claws!

I'd prefer not to switch operating systems just to eventually make TV viewing easier. I've had the current setup for years. It seems like DVB Dream is the only thing so far that will drive the motor correctly. Sichbo and DVB Viewer claim they're moving the motor, but don't. MediaPortal, Windows Media Center, and NextPVR only support switches, not motors. I have no problem changing the setup to a few dishes, but the wife might object to losing all the balcony space. I think for now I'll try contacting Sichbo about the motor issue (it SAYS it's moving the dish) and Linkbox about their clock issue.