I can do endless blind scans as I move the dish slightly but that is subject to error. Would one of these inexpensive satellite finders be a useful tool? If I can find any signal, I could then use my receiver to analyze it further.

Sent from my SM-G950W using the SatelliteGuys app!
Reactions: spongella

Probably not the inexpensive ones. Never had any luck with those. I have heard the higher end professional grade ones are very good. I believe Titanium sells them?

The little cheapo's can be useful,especially when you're looking in places with not a lot of signals.They won't tell you much,other than something is there, but sometimes that's all you need.
Reactions: spongella and FTA4PA

All I want to know is something is there. That's the hardest part in unfamiliar sky. Once that is known, we have lots of ways to find out more starting with a blind scan. I find those sat-beepers indispensable, for the one purpose: finding A (any) satellite signal.

They are only not indispensable, I think, when you have otherwise found a satellitesignal already.

Of course, the sun method is also very good, for finding the right azimuth.
But I hardly do any satellitefinding at exactly the hour, that the sun has the same azimuth as the satellites at which I aim. Let alone if the sunshine is present, at exactly that moment.

After that, I use a receiver with a good quality bar, near the dish.

Greetz,
A33
Reactions: spongella
B

I have one of those and find it very useful when the target is clearly above the tree line. It tells you there's some signal around there and you can blindscan with the receiver and see what it is (not always, as it could be a DSS or Turbo8 signal, that the receiver won't detect).

The limitation however, is that when you get low on either end of the spectrum, chances are that you'll have obstacles (trees, buildings, hills) not far from where you're aiming at, and the squeaker thing will detect those as well, as their thermal noise will generate a squeak just like a nice satellite signal would. So on those parts of the arc, it's pretty much useless IMO.

still, it's just a few bucks, so why not give it a shot
Reactions: spongella and FTA4PA

The expensive ones will tell you if you have enough C/N to lock the signal.
Reactions: spongella

Thanks for all the comments. I just downloaded an app for my smartphone that allows me to place the phone against the LNB arm and swing the dish in azimuth. I think it also checks elevation but with an inverted dish that might be an issue.

Anyway, the app indicates my dish is right on 22W, which it is, so its accuracy is good. Maybe I can just use this app and blind scans to move along the arc.

Sent from my SM-G950W using the SatelliteGuys app!
Reactions: spongella

I use a Radio Shack satellite finder first, to get a meter swing, it's very helpful. The RS meters were made of metal and are sturdy. Then I use a handheld satellite receiver to optimize and see the actual FTA broadcast. The other inexpensive satellite meter is my Channel Master that I use for satellite finding, it has a built-in power supply and more options. (Disregard the Nooelec gadget attached).

And yes, the Eastern sky east of 65W Ku, at least here, does not have many FTA sats of interest other than 34, 30, and 15W Ku. For a while 45W had two FTA channels but those left the air. I still like to fish around for signals though.

One additional note..tipping an offset dish upside down does give you a much more manageable elevation angle compared to normal position when tuning in low elevations, but it does have one disadvantage. Higher pitch in elevation upwards tends to catch more rain, which stays on the dish for a few seconds during a downpour and can knock out the signal. It also has the bad result of clinging snow when you have an accumulation. A "normal" offset mount in its conventional system will point into the ground, causing an increase in noise picked up by the dish at low satellite elevation angles, but with the sometimes benefit of either shading the reflector from any snow staying on the surface, or catching any rain at all. Your mileage will vary.

In my case, I must use inverted so the dish bottom doesn't hit the balcony boards. I even put a cinder block under the front of the pallet for a little extra height.

Dish is pointing at 22W. View of the direction from behind dish to 22W. 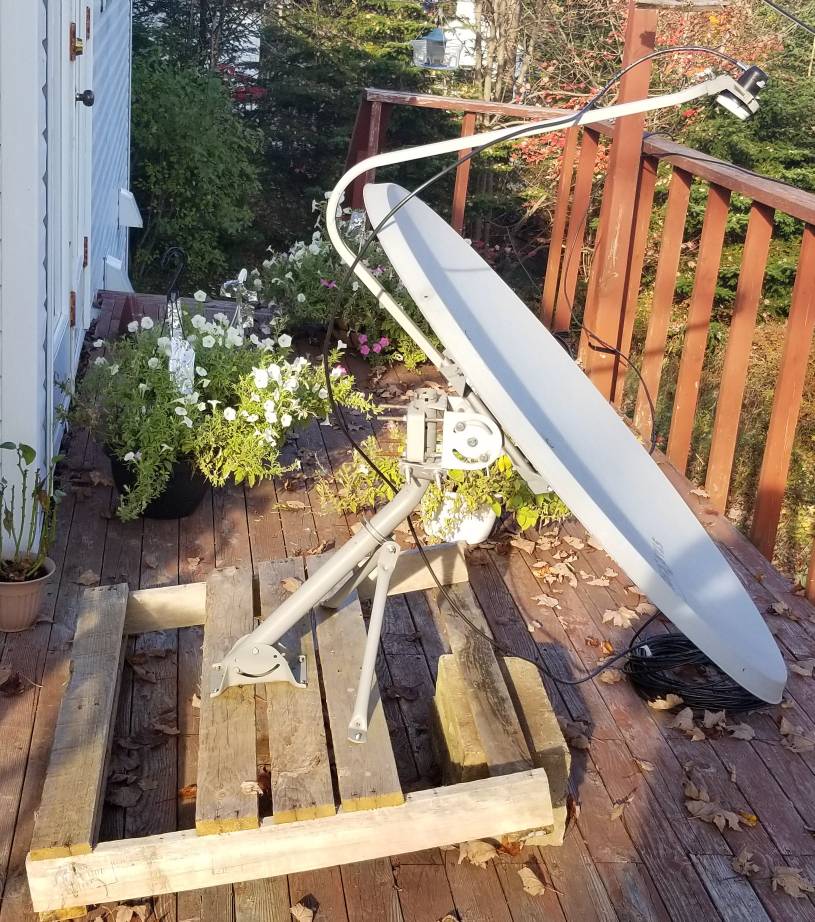 That must be "fun" to align.

Not too bad...when there's a signal. I set azimuth using multiple smartphone compass apps as reference. I use different angle meter smartphone apps to set elevation. Once close enough, I then use the patient armstrong method of slowly rocking and rolling.

The key is to be sure a tp is active and know that its footprint falls on your location. On the western arc, this is simple since everybody knows the active tps. On the eastern arc, few know the active tps falling on the east coast.

Sent from my SM-G950W using the SatelliteGuys app!
Reactions: KE4EST
Previous Next

A
Having issues setting up ibravebox v8 HD with Galaxy 19