why can't I get WHSM

It's been up way before 91. I was surprised when that it actually turned when I 1st tried it. I had to get a new rotor box. (?) , hooked it up and voila it rotated. But a few years ago, it stopped. So I figured whatever positioned it stopped in, that's what I would get........

I do check the TVFool report and have a tough time deciphering what I should and shouldn't get. But now that I know 8 is pretty much out of the question . I'll check it out some more. Thanks so much Iceberg!! You are always so helpful!!!
Reactions: Mr Tony
M

Annie61 said:
I do check the TVFool report and have a tough time deciphering what I should and shouldn't get.
Click to expand...

OK. Tvfool training 101
I just ran a simple city address (using your city in your profile). I assume it puts it at the city center. Put 25 feet above ground and let it run. Now I colored the main things below
yellow shows what station it ACTUALLY is transmitting on....and the station number you know. As you know most stations went to UHF after the transition. So 3 out of Hartford is actually on 33.
Red shows basically the signal meter for your area going from strongest in your area down. The lower the number the harder it is to pick up. Theoretically anything about 0.0 you could possibly get....but its been well known folks can get stuff in the negative. As example I can get a ABC where I live that shows -20.0ish....Anything in the green you could probably get with an indoor antenna. Yellow shading (anything below 30.0) requires an outdoor antenna (in the attic or on the roof). In the red shading (below 15) requires an outdoor antenna and usually a pre-amp.
Blue box shows how the signal gets to you. Line of site is just that. 1edge and 2edge means it bounces off something (or in the case of 2edge...2 things) to get to you. They are harder to get.
Black box is how many miles the TRANSMITTER is from you (not the station).
Brown box is where on a compass you would have to aim to get the station

So using my "dummy" address it shows WHSM is line of site and a 44.7 which an indoor antenna should get it rather easily. Even if your antenna is aimed the wrong way it still **should** grab the station. Also as you can see 8 is way down on the list (and 2edge) so unless the antenna is aimed at the station, the odds of getting it are pretty slim 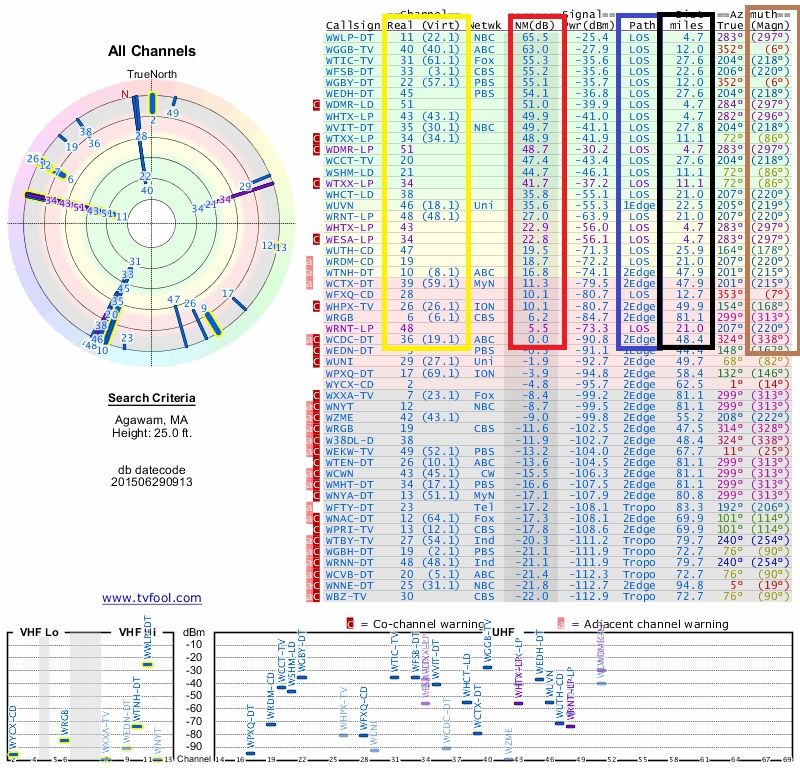 Ok so had a friend put up the Mohu sky I wanted something simple,I could not scan any channels withe amplifier hooked up ,I took it off and it scanned all the channels I got before with the indoor antenna but crystal clear ,does the amp make that much of a difference?
M

If you are close to the towers an amp can overdrive the signal which will result in no signal.

Zero channels show up! Maybe a bad amp? I was thinking of going to buy one of it wil? help get a few more channels!
M