Wire re-routing. Which to snip? (1 Viewer)

Toggle sidebar Toggle sidebar
You are using an out of date browser. It may not display this or other websites correctly.
You should upgrade or use an alternative browser.
Register Today to see less ads! It's Free!
D

When our system was installed, the installer used the existing coax network in our house. There are 4 wires coming from an SW44 switch running to 4 different rooms. As of now only 3 receiver are being used. However, one is a dual tuner PVR and I would like to re-route one of the lines.

This is outside the house. Pretty typical. 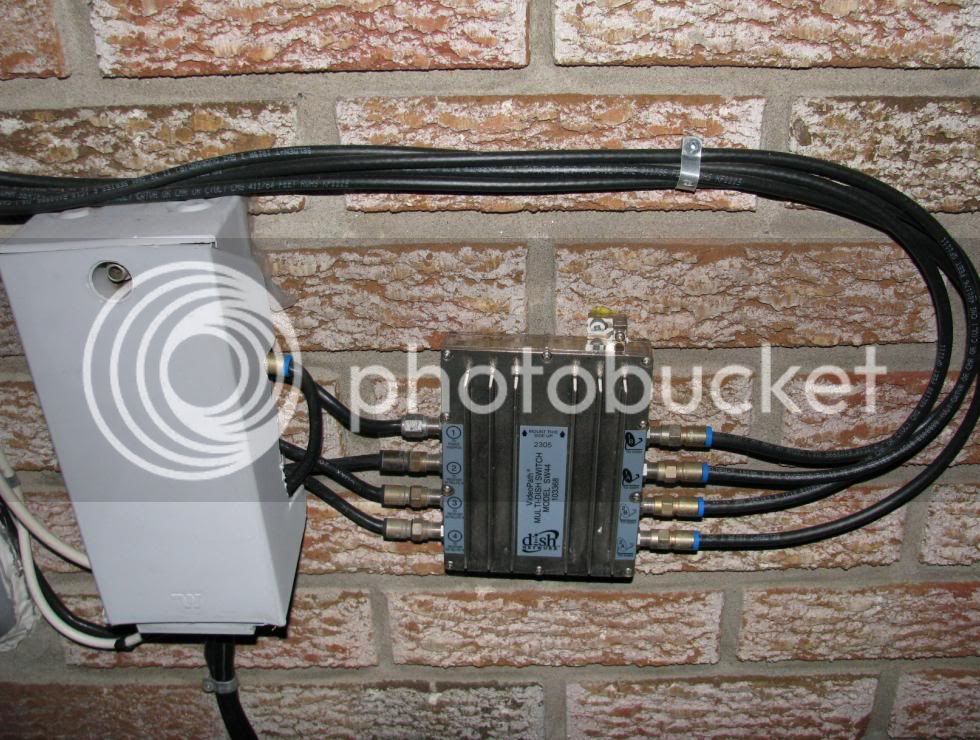 Here are the wires coming in from the SW44 and being fed into the house's existing coax network. You can't really see it, but each wire is labeled 1-4. Now for the questions. Pretty stupid one first, but I'm assuming the numbers on the wires correspond to the output number on the SW44. Correct?

Also, once I figure out which wire feeds to the outlet that is no longer being used, is it alright to snip it, and re-route it into the second tuner of my PVR?


Thanks for the help!
Register Today to see less ads! It's Free!

Why not just disconnect one and see if your system still works? If not try the next.
D

That's what I plan on doing, but it's 11 PM, and there's a creek behind my house. It's mosquito central out there so I'm going to wait until tomorrow to try anything.

I just want someone to confirm that all of my assumptions are right before I go and screw something up.
Register Today to see less ads! It's Free!
D

I'd still like some input so I have some ideas for tomorrow when I actually try this. Any help at all would be greatly appreciated.
J

no one knows... its not a "normal" thing done at every install. someone numbered them... who and why, the only person that knows is the one that did it.

and yes, you can use the unused line as the second input for your dual tuner
D

Jared Twomey said:
no one knows... its not a "normal" thing done at every install. someone numbered them... who and why, the only person that knows is the one that did it.

I'm not surprised it's not normal. Installers in this town seem to be complete dinks. After I moved out of my Mother's apartment, I left a dual LNB dish with an SW44 mounted on my balcony. Another tenant in the building was using out balcony to mount their dish because they lived in the basement and good get a good line of sight. When they canceled their service, I guess an installer came to remove their equipment. My dish and switch magically disappeared around the same time. Great. $200 worth of equipment gone.
D

Jared Twomey said:
and yes, you can use the unused line as the second input for your dual tuner
Click to expand...

Thanks for the advice!
Register Today to see less ads! It's Free!
Previous Next