Last night we had strong storms in our area, which never bother my equipment. Either last night was the exception, or my positioner for the one actively motorized Birdview lost it's marbles.

The picture you see was kind of interesting. My RING security camera woke me during a strong 'bout of storms near midnight. The light, the wind, the rain made it think we had motion. The picture was snapped from a live RING feed to my phone with me repeatedly and manually taking screenshots, and I happened to luck-out and get one just as lightning hit nearby which made the dark of night look like day.

Now, notice...the Birdview white dish you can see in the "night into day" picture is aimed properly at midnight...at 101w.

Later in the day, I walked out to our parking lot, and the dish is tight up against it's pole. No damage to the drive or the dish. (Birdviews are very durable.)

I must be nuts, but...even in our constant rain, I went out, snipped the zip ties holding the motor cover on the back of the dish, undid the common wires that are shared with the motor drive (custom built to work at a 5kw radio station)....and stood in the rain with my car's 12 volt jump box and the WONDERFUL satellite meter/tuner/spectrum analyzer which I bought a few years back from Titanium....and manually ran the dish back to it's 101 in just a few minutes, and found the Flinstones on Me-TV showing on the small screen! Success!! It took a while, given 1/3 the voltage going to the geared motor...but it ran smoothly.

I've bypassed the signal going through the positioner (cheap unit, never really had enough oomph to move a Birdview efficiently) and gone directly to the Amiko receiver. With the diseqc switches, I'll still have decent choice from the dish farm.

What I don't know is:
1) What caused the positioner to run the dish all the way down....because the position of 101 was centered, and nothing on that dish is programmed below, say, 105.
2) If the positioner was the annoying cause of intermittent signal drop (bad connection internally maybe) which has plagued this system for a long time
3) If I'll end up sick again for standing outside in the rain to get this back on target.

Hopefully there's still time before winter to plant (2) more stationary C-Band dishes, one for 99W, and one spare. With the one in the front yard aimed at 105 for audio, that may be enough to get through the winter.
I'll have to be on the lookout for one of the better dish movers, and restore that Birdview's mobility, but for now, we're at least back where it spends most of it's time.

Guess it was a sign I'd been away from this site too long.....just been BUSY!
Time for the full autumn tuneup before the snow flies...on ALL the dishes and the system, I guess.
Love that night-time picture where it seems like day. You can see the rain in streaks on the still, and the reflection of our night security lights in the station Jeep's license plate and rear lights...just to prove it was, indeed night. 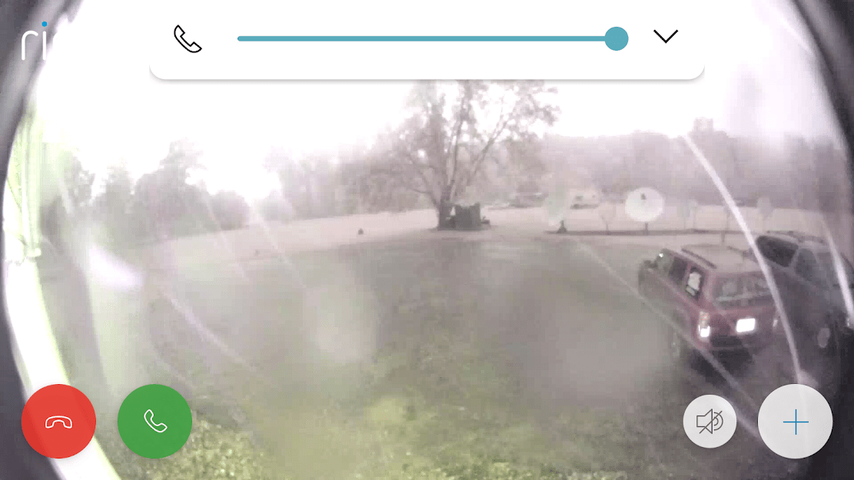 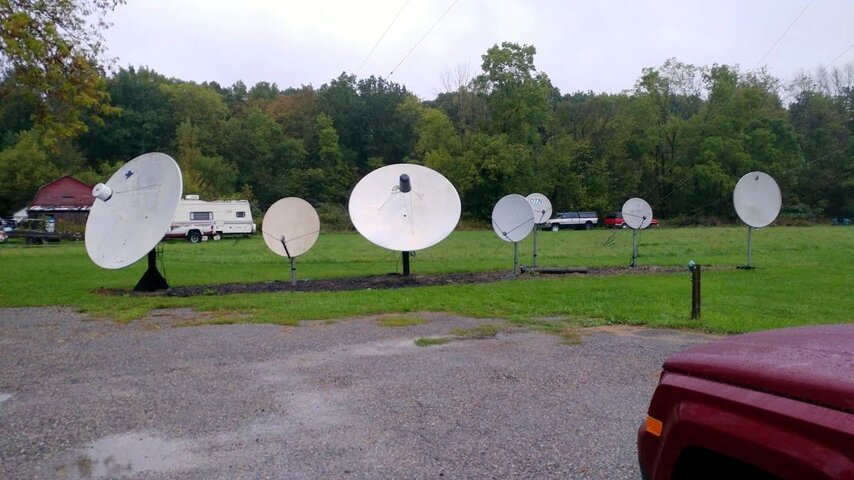 Plans for one, maybe two more Birdviews before winter. Just hooked up the 6th dish from the left today for 87 W kU to add LPB to the selections, since
moving my main dish is not going to happen for awhile. Will peak the kU tomorrow, not sure how strong LPB is on the average, but it seems to lock even with low quality on a former DTN dish and pll LNB. Nice being "back" here on the site, been so busy I hadn't done much with satellites or my membership here in way too long.
Reactions: Titanium and FTA4PA

I forgot to mention or "add" that today, the step-up pulse voltage device smoked after overheating and probably would have burned the station down had I not been here. I'd bypassed the coax loop through the positioner, and the power was "off" to the Vbox, but the custom box which stepped up our pulses and interpreted the rotary converter's output at the birdview to something the positioner could handle literally was too hot to handle. Found it while in our studios today by "smell." now we're REALLY going to have to deal with stationary dshes, or at least dishes with two power leads exposed from the motors for the winter to move if necessary. I have ONE hope, that a BV parked very near my apartment in the station will work "normally" without the modification for pulses if I buy a new positioner and keep the cabling to 50 feet or less as opposed to the long run the "farm" has. Time will tell. Maybe this weekend. Need to get positioner now as I'm pretty sure mine is gone. Really want the Titanium unit, it seems to be the BEST of the best.
Reactions: Cham
Previous Next
Share:
Facebook Twitter Reddit Pinterest Email Share Link

I
Motor Problems after winter