Can't log in to DRA - Is DRA still supported?

I just tried to log in to the Dish Remote Access (DRA) site and I can not log in. The message onscreen says: "The system is currently unavailable, please try again later". Dishonline works fine. Did Dish finally take down the DRA site like it has been threatening to do for the past year?

This is the link I was using for DRA. Does this work for anyone else?

I just tried your link and also was not able to log in to DRA. I did get in to DRA via this link:

Dishphreak, I tried the link you posted and I still can not log in. Using that link, it keeps telling me that my password is incorrect even though it is the same email and password that I have always used to log in for both DRA and Dishonline.

I tried this AM, also using the dish sling url. Got the message that it was no longer supported and did not get the option to continue. Was redirected to the Dish Online url. Was able to access my sling and the dvr after it installed a new add on in Firefox. Have a video from the dvr on my laptop right now. Used my dishnet log on and password.

Say goodbye to being able to "resume" a DVR recording where you left off. I don't know why that's such a hard feature to implement given they had it before with DRA. Guess it's just the mobile apps for me from now on. : (
T

I really hope that DRA will be continued! I like it so much better than Dishonline!

In terms of lacking basic functionality of the previous version (DRA), Dish Online is like the 922 of websites.

The dish.sling.com website will work if you log in using your Dishnetwork email address on file, not necessarily your username/email address. (My username is still my username, so I don't have this confusion.) When the popup pops up to tell you to continue to DO, just cancel the window and continue with DRA.
T

Tried again just now and it worked. I'm looking at the old DRA website on dish37.sling.com.

The back door at dish.sling .com should work if you have an identical username email address and password setup at SlingBox .com.

The mismatch is because of the authentication methods they were using, I don't have the detail, but it seems that when we would login at DishNetwork, it handed some sort of trusted token over to the dish.sling .com servers. Since DishNetwork isn't currently doing this.. it means you have to have had a valid Slingbox user/pass ... and by making them identical to dishnetwork, that perhaps that was what allowed us in and allowed the back end servers to recognize the *dish* side of things.

There was a user that tried this.. and is being given a setup/activate web for the dish receiver ... after they setup their account at Slingbox and then tried dish.sling ...

The only thought was that since they'd never used dish.sling directly, that they may have had to prior, so that both sides would know the user/sling abilities.

I tried creating an account via Slingbox.com and then logging in with dish.sling.com and all I got was the following error page:

I tried again the old way through https://my.dish.com/customercare/equipment/processSatTimer.do and I can log in just fine, but it's to a page that says:

I have the same results as Nominal.

The dish.sling.com link that bhawley posted above takes me to the same log in page that Dishphreak posted in post #2. Using that link, it keeps telling me that my password is no good, even though I am using the exact same email address and password that I have always used on the old DRA site and the Dishonline site.

DRA hasn't been supported for a long time now.
Its just that the work arounds people have been using to get to DRA now no longer work.

Did you follow TG2's advice and verify you are logging in to dish.sling.com with the same credentials as you use on slingbox.com?
J

I can still get in using the link Nominal posted. URL ends up being DISH Remote Access Login

Took awhile to connect to my DVR, but I can see the contents now. No Sling adapter so I can't say if that's working or not.

Everybody please look at your "Email address" under My Profile on the new MyDish.com website. Note that your "Online ID" is a separate line item and (in my case) is different. If you are entering your OnlineID in the DISH Remote Access Login site, this will not work and has never worked.

I don't know the deal with why some are able to connect to the old DRA site and some aren't, but when I login at https://my.dish.com/customercare/equipment/processSatTimer.do this is what I get: 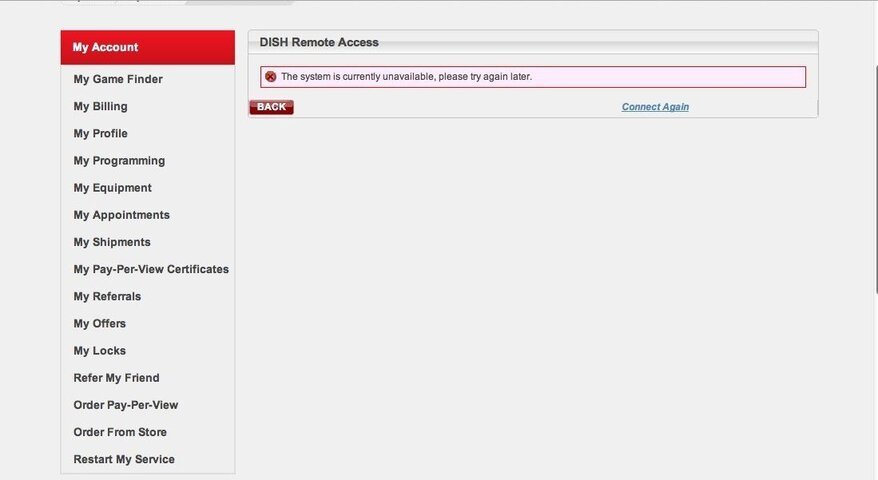 Also, after registering at Slingbox.com with identical credentials to my Dish account and going to dish.sling.com, I got directed to a screen requesting receiver info and after filling it out I get directed to an error page.