Toggle sidebar
You are using an out of date browser. It may not display this or other websites correctly.
You should upgrade or use an alternative browser.
Y

Is Dish Network or Directv better? I currently have Dish I have three more months until my contract ends and I feel like Directv is better in terms of channels.I have the AT250 for $72.00/month for 2 hd receivers. What are the pros and cons? Let me know what you think.If I do get Directv, can they remove my old Dish satellite and replace it with their new one the wires are prewired from Dish.
Last edited: Apr 12, 2013

Only you can answer that question based on the specific channels you are interested in and how much you are willing to pay for them. Many play the 2-year new customer discount game going back and forth between Dish and Direct and there's nothing wrong with that, unless you have family members who are resistant to change (different receivers, remotes, channel lineups).

Change providers and make up your own mind it will only take a 2 year commitment. Just remember promotions do expire so at some point you will pay the regular price.

These are always lively aren't they?

One is not better than the other, they are literally 2 sides of the same coin. The hardware and the approach to managing the DVRs is different, and the speed of operation is hugely different with Dish being much faster.

Channels and cost are where it is at. If Direct has the channels you want (and HD you want) more so, or good enough for your family, then a switch can save money in monthly costs. Upfront equipment costs vary from free to a lot of dollars depending on how many units and which ones you need.

I've switched fairly often and don't find it daunting at all and I like both services.


These are always lively aren't they?
Click to expand...

I'm guessing you're referring to KAB's deleted post, as there isn't anything in this thread I would classify as "lively"

As far as removing your old dish. It's not a required job of the tech. But in experience a polite asking may help your cause

As mentioned above there are some differences in hardware and programing.
I

It's not lively because nobody ever tries to answer the question without the tired old cliches of, only you can decide and what channels do you like blah blah blah. I am Assuming that the majority of people coming here to ask this question are considering the Hopper or the Genie. What little I know of the Genie is that you for sure want the HR44 and not the HR34. There's a reason "D" has replaced the HR34 so quickly (many upgrades in the HR44). If you go with "D" make sure it's the new HR44. Some say PQ is better with "D" but I can't tell a difference. You can save money over the length of the 2 year contract if you switch because of incentives. Who's DVR is faster, Hopper or Genie? Well, the HR44 is faster than the HR34 but is it as fast as the Hopper? I don't know but a head to head shootout would be interesting. The Hopper has three tuners with some options to record more than three show (and an OTA attachment). The Genie has 5 stand alone tuners. Both have 1TB hard drives ("E" has 2TB if you can use the extra 1TB). "E" is light years ahead of "D" when it comes to implementing the use of an EHD (this is a very big advantage to many). Hard to compare the Guides but I think they both look way too busy and I know the Genie only allows a handful of channels (5 I think) to be shown at once and only goes out 90 minutes which makes programming very difficult. I forget if the Hopper is any better but it may be the same. The HR44 has a very modern looking new remote and the machine itself is more compact, wireless, and has an external fan. But, and this is huge. The HR44 does not allow you to turn on and off a AVR. That's all I can think of to help your choice. After looking at both I decided to stay with my 722 with OTA being heavily used. Hope this helps a little.
Last edited: Apr 12, 2013

friendly reminder, if you are here to post sarcasm then please move on. this has been mentioned many times by Scott and others. the OP wasn't rude yet here we go again with the same folks being mean especially with our new members. an announcement was already made that it will NOT be tolerated any longer. please think twice before you post and move on if you have nothing that will actually contribute to the thread.

lets get back to the topic at hand. off topic posts will be removed. thank you.....

Having had a lot of experience with both DirecTV and Dish, personally I like Dish a lot better.
Y

Honestly, the only advice that can be given here is how well the equipment works and what to think about when you prioritize your own needs.

You need to:
- check the channels in the packages within your price range
- what is your position on sports as a priority
- check the costs for the equipment
- make certain you have Line of Sight for the sats

Otherwise, the two companies are pretty similar, other than Directv beats puppies for fun.
Z

your_mom777 said:
Is Dish Network or Directv better? I currently have Dish I have three more months until my contract ends and I feel like Directv is better in terms of channels.I have the AT250 for $72.00/month for 2 hd receivers. What are the pros and cons? Let me know what you think.If I do get Directv, can they remove my old Dish satellite and replace it with their new one the wires are prewired from Dish.
Click to expand...

Here what both Genie and Hopper guides look like. Genie guide is on top. Personally, I like the 3 hours the Hopper shows at one time. 90 minutes is not enough. 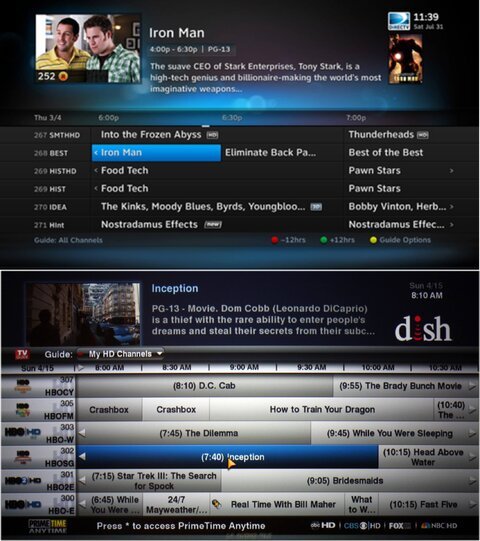 I love the hopper UI

If you want to go back in time like 20 years get the Genie. One of the biggest mistakes I've ever made was going to DIRECTV for the Genie. Slowest p.o.s I've ever had.

hawkyou72 said:
If you want to go back in time like 20 years get the Genie. One of the biggest mistakes I've ever made was going to DIRECTV for the Genie. Slowest p.o.s I've ever had.
Click to expand...

I've had both services and they are both good.

DirecTv good - guide is accurate to the minute and provides more show details, more HD sports and premium channels
DirecTv bad - older DVRs are very slow, can only use internal OR external HD and must reboot to switch, EHDs require eSata interface

Dish good - faster boxes, EHDs can be used simultaneously with internal drives and will work with all DVRs in the home
Dish bad - guide is not minute accurate requiring expanding start and stop times (and I still miss some show endings)

I live at longitude 75W and Dish's satellites are positioned better for me. That may be something to consider when choosing a provider.

There are lots of posts about PQ. D* does transmit at a higher bit rate than E* and their PQ may be better but I don't see much difference and E* is good enough for me. The lower rate from E* also allows for more shows to be stored and that's important for me because I don't watch anything live except for news and some sports shows.

How much do you have recorded on your dvr's? Once your account is closed you will not be able to view them. You don't say which dvr's you have and if you have any ehd's. Since the ehd's are keyed to the account, any recordings on them will not be avaliable to watch even if you come back to Dish. If you do have a vip receiver(except a 211) the ehd will be usable on a Hopper if you choose to upgrade. I havea 2H/3J system and I love it. My technophobe wife even has figured out how to use it.We can start watching a recrding on 1 TV then pause it and resume on another TV.

I have a 73" DLP TV and sit about 10' away. I had my new Hopper and my HR24 connected to it for a few days and a quick back and forth showed me the difference is so slight to the eye as to be non-existant. So call it what you will, E* and D* are not enough difference in HD PQ to make it an issue these days.

Overall I have to give Dish kudos for getting the Hopper as close to dead on perfect as they did. It is one great box!

But Dish needs to work on the UI and get some lists there instead of being so thumbnail happy. And it would be nice to have more program info, I really miss that since I switched.

As to Premiums in HD, a pox on both services for not having every premium channel in HD, we sure pay enough for them!
Last edited by a moderator: Apr 13, 2013

To the OP, as you can see "better" has different meanings, there has been some good info on some of the differences between the two, hopefully the info so far had helped

A
Dish Network or DirecTv?

K
Who are you talking about... DirecTV or Dish Network???