I am receiving word from a few retailers that they have been shipped SuperDISH units from Dish Network, many of them will do their first installs today!

I have had a secret for the last month or so which because of the fact the SuperDISH has been released to the public I can disclose today. The folks at Dish Network were kind enough to send me a SuperDISH last month.

The SuperDISH I received was a Type II Dish and was not a beta unit, this was an honest to goodness retail packed SuperDISH. Everything was packed nicely and safely for ground transportation, below is the box the LNB came in, this LNB was only a few days old when I received my unit. This is what the LNB looked like out of the box, notice that this is a heavy duty LNB, this LNB assembly is no cheep $30 WalMart LNB replacement kit. Also in the box was a SW 34 switch, a mounting ARM (mast), LNB support Arm, the Mounting Bracket, 3 pieces which makes up the LNB shroud, misc parts like nuts and bolts and cable clips.

Assembling the SuperDISH was surprisingly easy! I had the Dish together in less then 10 minutes! When I put together my DirecTV Para Todos Dish it took me over 2 hours to assemble that bad boy.

I decided for this Dish I would not replace my old Dish but put this dish on the side of the other one. This unit would be pole mounted.

I went down to Home Depot and purchased a galvanized fence post (Perfect 2 3/8"!) this was only $7.49 for a 7 foot pole. I also purchase a bag of no mix quick set concrete.

surprisingly Digging the 3 1/2 foot hole in the ground was not as hard as I thought it was going to be, took me only 10 to 15 minutes to get all all done.

Then I put the pole in the ground and used my level to make sure everything was ok. Then by using the directions on the bag of concrete I filled up the hole half way with water, then I poured the concrete in, as it was setting I was checking the pole with a level making sure the pole was perfectly plumb. 15 minutes later the concrete was hard and holding the pole securely. I filled in the rest of the hole with the dirt that originally came out of the hole.

I gave the concrete an hour to dry some more and went and had lunch.

When I got back from lunch I went and checked the pole, still perfectly level. A friend of mine who is a retailer came over with his satellite meters. He wanted to watch me put the Dish on the pole and see how hard is was to align the SuperDISH.

I went in the house and got the assembled Dish, I then set the skew on the Dish per the manual. After that was locked down, I set the elevation again per the manual. I then placed the Dish on the pole. My friend hooked up his Bird dog meter to the 119 LNB so this way we could easily align the Dish. To his surprise the way I put the Dish on the pole we were seeing the 119 perfectly with no adjustments!

He then moved his meter to 110 again we were dead on with a very high signal.

He then moved his meter to 105, where we showed no signal. He had a feeling it was his meter and took a small spectrum analyser out of his truck, we hooked it up to 105 and BINGO we could see the transponders on the 105 satellite! We have somehow hit all 3 satellites dead on by dumb luck! We were so happy and excited, the neighbors must have wondered what was going on when they saw two guys dancing in the front yard. 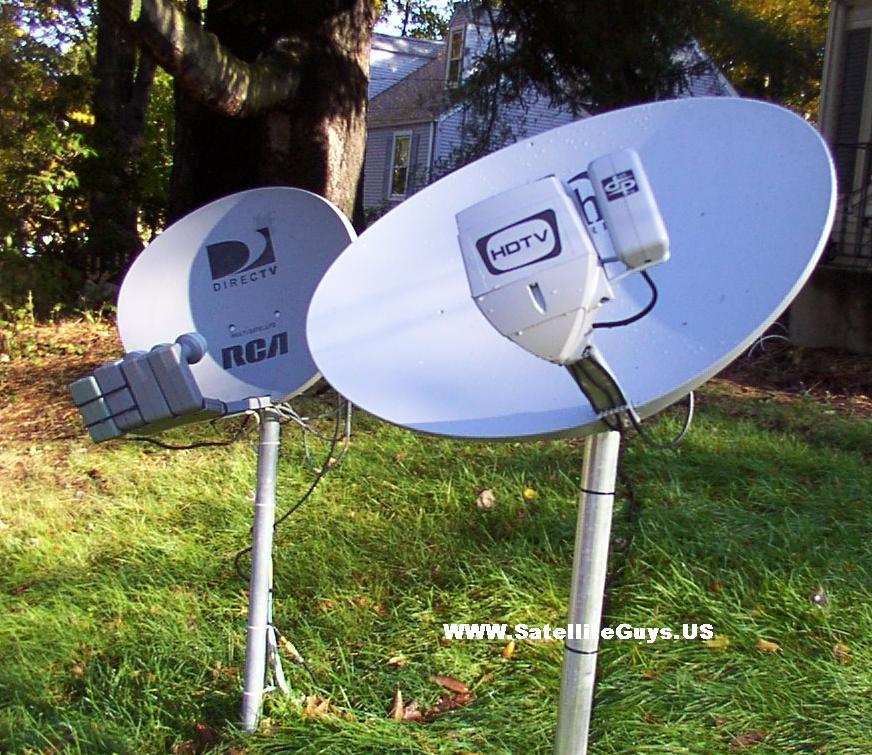 Earlier in the day I unhooked my 6000 and my 721 from the SW 64, I purchased a Dishpro adapter for my 6000 and had it hooked up and ready to go, so all I needed to do was move the unhooked cables to the sw34 switch.

I hooked the cables up and went into the house to the Dish 6000 and Dish a Switch Test. This switch test was a LONG process it took over 10 minutes to complete, but when it was done there on my screen was 119, 110 and 105 all verified.

I quickly grabbed the remote to turn on HBO-HD... It wasn't there...
I tried Showtime HD... Nope that was gone as well
Not even the HD demo channel was available...

We were both disappointed there was nothing on the SuperDISH to watch. Just as my friend was about to leave to do another install I noticed a new channel which I never have seen before, and that was channel 7000 which told me that I had my Dish pointed at 105 Degrees W.L., when we say this we again did another happy dance.

My friend then left.

I went outside to put the LNB shroud on the Dish, this was probably the most complicated portion of the install. The 3 pieces snapped together nicely but I feel it was designed backwards, instead of screwing down into a nut you had to go from the bottom up. It took me a good hour to to get that shroud properly installed.

But once it was done, I was happy. I believe i watched Channel 7000 and listened to the music for a good part of the night.

Here is a photo of my completed SuperDISH. Here is a close up of the LNB Shroud from the front, note that the HDTV logo on the front is painted on. My wife wishes that logo was an optional sticker, she does not want to advertise to the neighborhood that we have expensive electronics in the house. And a view of the LNB Shroud from behind. And finally here is my satellite layout. Notice I have DirecTV, Dish Network and ExpressVu all on one Dish. (I do not subscribe to DirecTV or ExpressVU anymore though)

So far having a SuperDISH has not been super as I have lost a few of the HD Channels I was getting off of 61.5. The only channel I have been able to get has been 7000. Now that the SuperDISH is rolling out for those that need them for locals they will enable the HD channels as well as I am sure there are a few who will be getting locals who are also SuperDISH owners.

My signal strengths are not bad at all, they are higher in fact then the signal levels shown on a SuperDISH training video I recently saw. Rain fade has NOT been a problem on 105 at all, and thats a good thing!

My thanks again to the folks from Dish Network for making this possible, and for allowing me to do my own install.

While I may say it was easy for me to install it was because I had professional tools at my disposal. Most users will not have a Bird Dog meter and Spectrum analyser to properly peek things.

My advice if you want a SuperDISH is to take advantage of the free install deal.

Thanks for visiting SatelliteGuys.US Today!

You are getting the HD channels that are up on 110, right? Can you still use your 61.5 dish with this setup or will you have to wait for the new DishPro SW44(?) switch to make that happen?

My 61.5 Dish is using a Legacy LNB and I am not climbing on the roof to change it out.
C

Scott,
Ask your freind, where can the general public purchase the Bird dog &amp;
Spectrum Analyser.
Did you need both devices?
When are you going to try for 121?

You can get a Birddog from http://roxsat.biz/product_info.php?products_id=102

I have no plans to get 121 as I don't sub to International channels.

I'm coming over to steal that thing j/k

Why is it on the ground ?

Thats the only place I can see all 3 satellites.

Scott, It really looks good, but I think you need to mow your grass. ha,ha.

jerryez said:
Scott, It really looks good, but I think you need to mow your grass. ha,ha.
Click to expand...

Yeah I do. When those pictures were taken it liked rained here for 2 weeks straight.

I was lucky to get a break in the rain to get that thing in the ground.

I know I will be beating a dead horse. What is the length and do you see a problem with installing it on a chimney? I see that it is heavy but in your opinion.

I would not install it in a chimney because of the Wind Load issues.

But in saying that I know people who have mounted 10 ft dishes on their roofs chimneys, etc with no problems.

I just would not recommend it.

It looks like it might be a bit top heavy if one were to use the "cement in the bucket" method on a balcony.

Yup although a tripod would work if you sandbaged the legs down.

Do you have an alarm on that thing ???? just checking before I drive over around 2am

No alarm, just a 110 Volt Wire attached to the metal frame of the unit.


How many total channels do you get with both dishes ?

I wonder how many of these would get stolen, especially hackers that cannot purchase them through the company.
B

36"??? How big is the directv oval dish for receiving HiDef? 36" isn't even protected under the Home Satellite Act is it? It looks huge to me,...I must say, I'm a bit disappointed its so big, that can discourage me from getting a superdish...

Got Pix of SuperDISH installed?