NWA LAWSUIT UPDATE
By Mike Johnson on 2012-03-14 21:08:30
The first hearing in a lawsuit brought against the NWA's parent company, Pro Wrestling Organization, LLC as well as a number of its board of directors by R. Bruce Tharpe, a member of the National Wrestling Alliance operating out of Texas, was held yesterday in Brownsville, Texas.
At the hearing, the presiding judge decreed that the State of Texas has jurisdiction over the lawsuit. Tharpe had argued that since he does business in the State, it was proper and fair for the suit to be held there and the Judge agreed.

The court also ordered that the NWA brand name not be allowed to be sold, mortgaged or "used as collateral" during the course of the case.

It was also noted during the hearing that multiple iinvestigations into finances and alleged forgery of documents for the NWA and its parent company are "currently being conducted" by the FBI and the Charlotte – Mecklenburg Police Department in North Carolina.

Reynaldo G. Garza III, an attorney for the NWA, requested to be removed from the case and was granted that wish yesterday as well.

The lawsuit, filed by Tharpe this past January, allegesd that the NWA had been committing insurance fraud by having a policy that designated it covers gatherings for 100 people for members when obviously there have been NWA events drawing well over that amount. Tharpe claimed in the suit that the NWA willingly misrepresented themselves to their insurance company, putting Tharpe and others at risk legally while using the policy.

The lawsuit claimed that the NWA fraudulently induced members to join the organization, including Tharpe, by claiming that they would be covered by the NWA's insurance and that NWA Executive Director Bob Trobich (who is an attorney based out of North Carolina, which explains the involvement of NC authorities) led a conspiracy among NWA members by discussing this and pushing other officers to go along with the alleged fraud.

The suit also claimed that the Board of Directors, in conjunction with Trobich, threatened members with fines and ejection from the NWA if questions regarding the insurance were pushed.

Tharpe is seeking damages, although it notes in the filing that he does not seek a sum above $49,000.

When the lawsuit was filed in January, one NWA source believed it was Tharpe's very public attempt at a coup to force out Trobich and others and gain control of the NWA, in whatever form it still exists in 2012, and run the organization. The same source noted that Tharpe had attempted to get other members to side with him against Trobich and when that didn't happen, they were added to his lawsuit. The source cited that Tharpe was making noise that he was tired of seeing Trobich continue to do "nothing" with the brand, citing that only one member had regular TV (Dave Marquez in California) and that the organization had no strategy or force guiding it.

NWA News: NWA Title change overturned
The NWA Title changed hands at an event in Red Deer, Alberta when Vance Nevada defeated Adam Pearce. However, the NWA announced on Saturday that Nevada was disqualified due to outside interference, so the decision was overturned and Pearce keeps the title.Powell's POV: This appears to be a publicity stunt to get people talking about the NWA Title, which his a wise move. That said, they would have been better dragging out the decision until Monday when online interest in pro wrestling is much stronger. Plus, it would have given the story more time to spread.

NWA Champion Adam Pearce wants to bring prestige back to the title, defending against an ROH challenger selected by Jim Cornette at a WrestleMania weekend event
NWA Champion Adam Pearce told Mike Mooneyham of the Charleston Post and Courier that he wants to bring prestige back to the title. "I’m absolutely trying to mirror what guys like Jack Brisco, Harley Race and Ric Flair did early on by literally going everywhere I can with that belt,” Pearce said."Say what you want about the NWA in its current incarnation, but that the image of that belt, the 10 pounds of gold, is the godfather of all modern wrestling championships. It’s a shame to me, as a wrestling fan first and foremost, that today’s young generation really has no idea of what it even is." To read more comments from Pearce, visit http://Postandcourier.com/news/2012/mar/25/mooneyham-column-arn-anderson-symbol-excellence/.
Powell's POV: Pearce was promoting the NWA Ring Warriors event that takes place on March 29 in Fort Lauderdale during WrestleMania weekend. Pearce will be facing a mystery challenger from Ring of Honor that Jim Cornette will be selecting, according to the storyline. The show will also feature the Dark City Fight Club, Billy Gunn, The Head Bangers, and special guests Ivan Koloff and Kevin Sullivan. We are looking for correspondents for the show. If you are going and want to help, contact me at dotnetjason@gmail.com.

TROBICH RESIGNS FROM NWA
Bob Trobich, the attorney who was the longest standing member of the National Wrestling Alliance, officially resigned from his position as Executive Director this week. David Baucom has been named the new Executive Director.This is all fallout of the lawsuit brought against the NWA and parent company Pro Wrestling Organization, LLC. 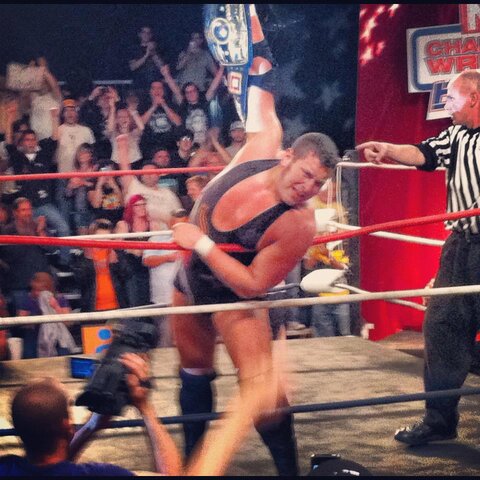 Cabana vs Pearce should be a great series of matches like the benit vs booker t and magnum t.a vs nikita koloff matches.I wish wwe would get back to matches like this but wont happen till vince is gone

Colt Cabana vs. Adam Pearce in a Seven Levels of Hate series for the NWA Title begins today, correspondents needed for NWA Championship Wrestling From Hollywood TV tapings
The first match in the Seven Levels of Hate series of matches between NWA Champion Colt Cabana and Adam Pearce begins today at the NWA Championship Wrestling From Hollywood tapings. The first match in the series will be a First Blood match. For more details on the tapings, visit NWAHollywood.com...........Powell's POV: The second match of the series takes place on June 8 in a Boston Street Fight match at the Knight of Columbus Center in Bridgewater, Mass. We are looking for correspondents who are attending any of these matches, including today's taping. If you can help, send a report dotnetjason@gmail.com.
Previous Next
Share:
Facebook Twitter Reddit Pinterest Email Share Link