Considering going with Vue instead of cable or satellite. Need to know how setting up recording works. Do you set individual shows to record from the programming grid? (Assuming they have such.) And can you set up an entire series to record? Used to doing it this way with my DTV. Any help here most appreciated.
S

You select a show based on the title, and it will link all airings of that show into "My Shows" and retain 28 days worth of backlog, plus pull in any On Demand or Catchup episodes that are available.

- Start and stop times for the recording are limited to what is displayed in the program guide / show listing metadata. You cannot modify the start or end times (to pad in either direction)
- Recordings are title based, and will record matching titles on any channel in your subscription package. (ie, if you get your local CBS channel and record "The Big Bang Theory" it will record episodes on that channel, plus TBS, plus any other channels that are airing syndicated previous seasons) There is no option for "just new episodes" - you're getting all airings of that show for a running window of 28 days.
- One recording is maintained per Title / Description pairing. If you pick a commonly aired show with an unchanging description like "BBC World News" at 10pm or SportsCenter, you will only get 1 recording of that program until you remove it from "My Shows" and re-add it. The fun thing is the behavior changes -- with BBC World News, it would record once and then stop, never to record another airing of the show again. With SportsCenter it will keep recording the latest airing of SportsCenter and replacing it in your recordings. That last one is fun if you try and work around the recording restrictions to catch an event that runs long.

For shows it was awesome -- especially with how it linked in the on demand and catchup episodes so you could have more things to watch right away. That was a big hit in the house for things like HGTV shows that were inherently non-episodic and so order didn't matter -- you could pick a show and immediately get a wealth of episodes to start watching.

For watching events (hockey games in our case) -- well, that's part of the reason we've resigned to paying the ransom that DirecTV requires. The DVR is really fussy with live events -- sometimes you can't start from the beginning until the live airing ends, sometimes it would lock up when fast forwarding through commercials while the program was still live, and on occasion it would jump straight to live when trying to fast forward and catch up leading to spoilers. The other deal breakers were the lack of FOX Sports regional alternate channels, occasional nights where the service was unusable, and the delay inherent in Internet video meant spoilers any time we'd get texts from friends who are also fans of the local hockey team.

I like how it's remembering to record shows and series that have since fallen from My Shows grid (one month or so after the last episode) once the new season comes around or there's a re-airing, like a movie on AMC or FX. There's no way to manage this; it just seems to retain the info somewhere (unless I physically dropped it from My Shows). It also keeps shows for which On Demand content is still available, well past the 28-day window.

There's no time shifting of ESPN content, but there is for sports on other channels. YMMV

I get all the Fox RSNs I need and expect; no problem there. And if a game is important enough, I set a recording for whatever show immediately follows it. The inability to manually "pad" recording time has only been problem one time where I didn't get the last minute or two of a show, but I likely would've had the same problem on cable, as it was a one-time network thing. I usually avoid trailers for the next episode for a series anyway, so I don't notice or care if those get cut off (they sometimes do).

It's certainly not perfect, so if optimal control and convenience is worth paying three to five times as much for cable or satellite, then PS Vue is probably not for you.

Thanks guys. Much food for thought. Seems that the 7 day free trial is in store for me.

The 7 day trial is a nice taste, and it was enough for me, but I had firmly made my mind up I was not going back to traditional pay tv anyway.

If you are on the fence, I would recommend the trial, and perhaps pay for a month and use it exclusively (with your other source as a backup). It may take you that long to really get used to it.

A couple things Vue has to its advantage over cable/sat is you get virtually unlimited tuners and unlimited recording space and can watch all your DVR'd content on any TV in your house without paying the expensive fees for the latest premium DVR service or additional box rentals for whatever cable/sat system you have.
S

For completeness, it should also be pointed out that you can only watch shows you've tagged as favorites (which is how you set shows to record) from the IP address registered on your account. If your IP changes due to ISP maintenance, a router change, etc you have to call Vue support to get that updated, and there are limits of how many times they'll update that for you.

Mobile apps (android / iPhone) are the only thing that will work outside of your home network, but only for live TV; you cannot access your recorded shows away from your registered home IP.

You can always watch any of the channels live. Specifically as it relates to the DVR, you don't set "recordings" for shows. You also can't watch those recordings away from your registered home IP address. If you want to watch outside your house, you can only watch live TV, and that has some channel restrictions as well. 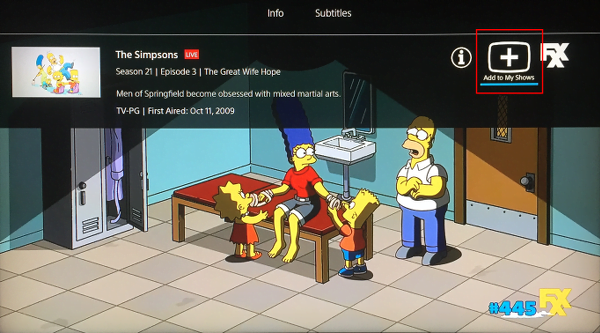 You select "Add to My Shows" for something you are watching / see in the guide, and that is what triggers the program to be "recorded"

In a lot of cases that can be a benefit, because you're no longer managing timers, tuners, overlaps, etc. The potential downside is that you have to run on blind faith that what you tagged will actually record, because you don't really get a "to do" list like on satellite / cable / Tivo DVR. You also can't select just one specific thing in the program guide to record. So if you only want the Friday at 5pm airing of a news show, it doesn't matter, you're going to get all the shows with that name. It's particularly bad with things like sporting events because they have program names like "College Football" or "NHL Hockey" -- so your "My Shows" list will include recordings from all available channels that have that program name. If you are just interested in watching your local team, you can still see those games, but you'll probably have a DVR list that includes a bunch of other teams as well. It doesn't hurt you because it's "unlimited" space, but it can be a little tedious to navigate the episode list, depending on what sport or event you're recording.

I'm not saying this to scare you off -- the DVR functionality generally works pretty well. It just works differently than traditional cable/sat DVRs, so you definitely want to play with it a bit to make sure it works for you.

SpaethCo said:
For completeness, it should also be pointed out that you can only watch shows you've tagged as favorites (which is how you set shows to record) from the IP address registered on your account. If your IP changes due to ISP maintenance, a router change, etc you have to call Vue support to get that updated, and there are limits of how many times they'll update that for you.

Mobile apps (android / iPhone) are the only thing that will work outside of your home network, but only for live TV; you cannot access your recorded shows away from your registered home IP.
Click to expand...

When I switched out my router a few months ago nothing changed in my PS Vue setup or access to My Shows and I didn't have to call tech support. The only problem I had was with watching PS Vue in a PC browser, but it automatically prompted me to close the browser window, exit the Vue app on my PS4, relaunch the app on PS4, and then relaunch it on my PC browser. Then I was running normally again.


SpaethCo said:
The potential downside is that you have to run on blind faith that what you tagged will actually record, because you don't really get a "to do" list like on satellite / cable / Tivo DVR.
Click to expand...

In the PS4 PS Vue app there's a My Shows grid (L1 button on game controller -- maybe there's a way to navigate to this list on other devices?). It displays all the shows that are "recorded" or set to "record"; if you click on one, you can see which episodes are recorded (still within the 28-day window or available on demand), and if there are any new ones coming up in the next few days (the guide data only goes out six days). It also says if you've watched a show yet or not. Unfortunately, some of those details are incorrect, but it works fine for the most part. The best part is, it's impossible to accidentally delete a show that you thought you watched but didn't (unless you remove the entire show from My Shows). But yeah, not as convenient as the lists you normally get on cable/sat -- it's "blind faith" unless you do a little digging.
S

Zookster said:
When I switched out my router a few months ago nothing changed in my PS Vue setup or access to My Shows and I didn't have to call tech support.
Click to expand...

It sounds like they've relaxed it a little bit and as long as the IP comes out of the same netblock you might not have to re-authorize. For large ISPs like Comcast that have multiple netblocks per segment, this a semi-persistent issue.

There are dozens of threads like these on the Vue forums:

What do I need to get Vue?