Slow response are you having problems or too much advertising?

I use dial up and it takes for ever for threads to come up I sit there and watch loading 11 of 22 or picture loading or several other messages but the question and answers I am here for takes forever to display.

boba - Try using PDA mode (top right corner). That cuts out all the pretty stuff and pages should load quickly. I know when I view on my Blackberry it loads very fast and that is probably a slower connection than your dial up.

PDA mode does speed up loading but looks so weird i'll pass on it.

What ads do you see ?

I'm currently on a 49K dial up while on vacation. Things are moving pretty good for me. What I would expect for a dial up connection.

burstnet.com is still a pain in the ass, everytime an ad loads from that it takes forever to load the site I usually just click stop and reload. This has been a problem for a very long time on this site.

in fact it just happend to me here is a screen shot. It will sit like that forever until I hit stop and reload, and its only when burstnet is loading. Sometimes the site doesnt even show the header, other times it will be like the screen shot show the header but no post content. 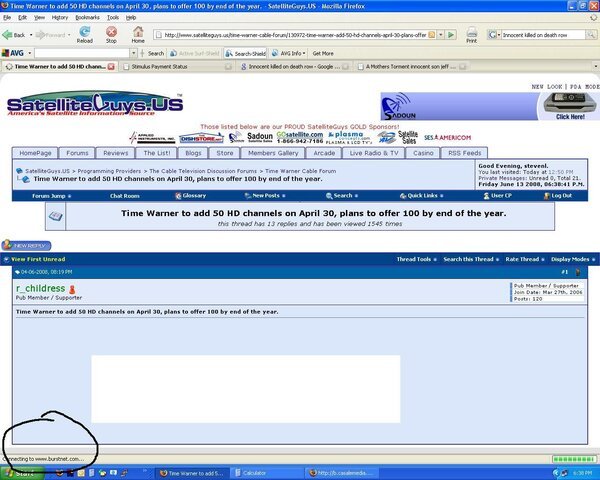 I use Firefox and AdBlock Plus. I don't know if it's a 2nd add-on or included with AdBlock, but they block *.burstnet.* by default. Explains why I haven't seen any slowdowns.

I should do that to. I have just "dealt" with it. hitting stop then reload seems to work.

Round Rock, TX US

I know the pub membership cuts "most" of the ads - everything but the banner at the very top.

ALso - you can turn off avatars in your User CP under options, that will eliminate downloading those pictures too.

Burstnet does seem to be part of my problem. I am using PDA mode more it is simply so much faster than normal that I can live with the different appearance.

Jason Crandall said:
I know the pub membership cuts "most" of the ads - everything but the banner at the very top.
Click to expand...

Perfect Advice! Dont ask us to fix the problem or look into it, just send us money and the problem will go away !sadroll

Round Rock, TX US

Stevenl,
The reason for the suggestion, and not an offer to fix it (which others had already done), is that pub membership cuts all the ads except for the Gold Sponsor ones.

There are times that the ad syndication servers are very slow compared to what I can do here. (I don't run the server where the ads are served from).

I know its the ad server and not this server. Which is why the problem only appears when one of the ad servers is lagged.

The smilies mean I was half joking. The reason I am only half joking is because this has been a problem for a very long time. The operation center has many posts in regards to this, and the same ad server seems to always be in the mix. Id assume removing that one ad-server that keeps causing problems would be a viable option. Replacing it with one that works properly. Or at least contacting the ad-serving company for a fix, and if they refuse removing them would be an option. There are plenty of ad-serving companies to choose from.

If it was not for the fact it seems its always the same "burstnet.com" causeing the problems (at least from the other threads I have read in the operations center) I would just let it slide as no big deal, and as something that "really cant be fixed without a major overhaul" but seeing how its only one ad-server, it may make it easier.

Also I will take the suggestions from others to get the ad-blockers, but that does not benefit the site, by me not loading the ads (if you are CPM, if its CPC then well it does not matter) So fixing it would benefit the site if of course you are paid on a CPM system.

I just got 1.9 meg on an Active X download and take over attemp on Sadouns Banner ad. It also sucked about 150 K from my computer before Boeing's firewall shut it down.

Sadoun is a good sponsor, and I will use his store, but whomever wrote his ad used an intrusive active X component in it -- Particularly when the red or orange banner is used.

We can't make the burst server go away. If it goes away then SatelliteGuys goes away.

We are dependent on their syndicated ads to cover our expenses so that we can stay online.

But that option is there and most everyone who does it seems to feel good about helping the site keep the lights on and the extra benefits they also gain.

If the cost of the pub membership does not even cover the lost revenue, then you should be pushing for people to stay non-pub members if you want to keep the lights on

Using that logic people who are non-pub members help the site even more then pub members.

stevenl said:
Using that logic people who are non-pub members help the site even more then pub members.
Click to expand...

That sure sounds like what he said.... Non-pub members are exposed to more ads, therefore more revenue. And as noted, the $20 someone pays doesn't offset the "lost" ad revenue (?).

Are you having problems????

W
Ads are becoming too much to tolerate