Views of the Manhattan RC-1978

The new Manhattan RC-1978 was delivered yesterday. I spent many hours scanning in satellites and figuring out the new setup. This will be ongoing, but wanted to share some initial views and a limited review. 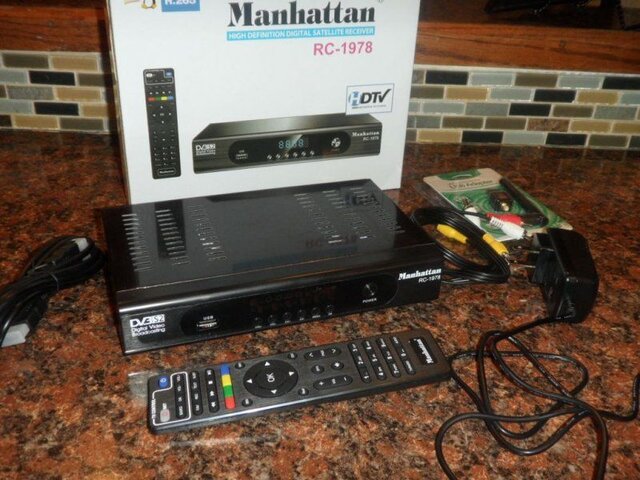 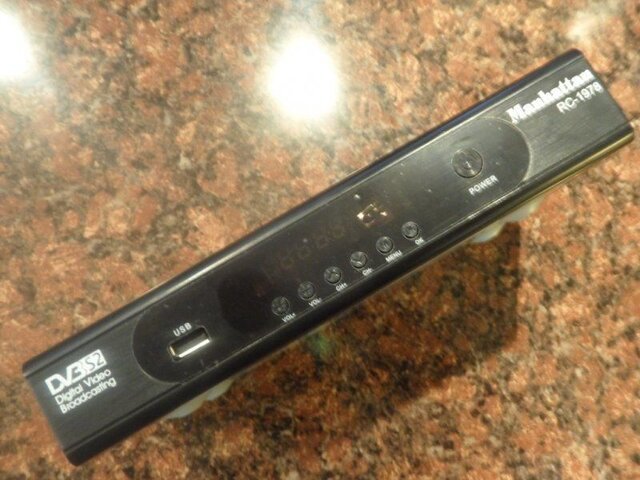 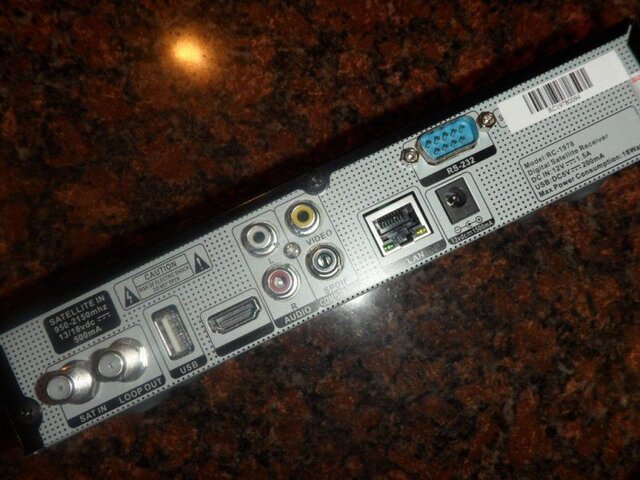 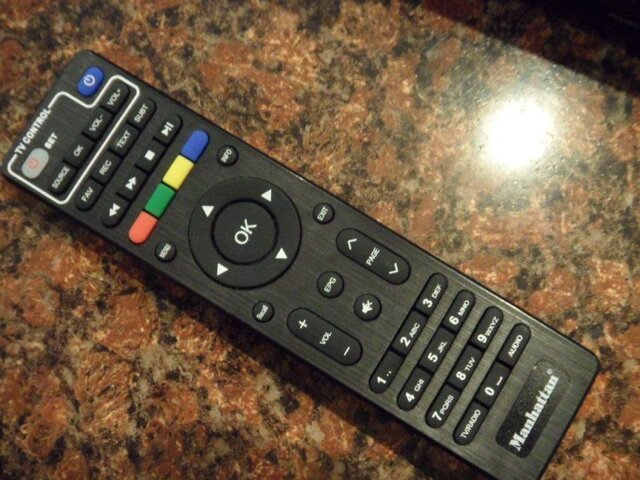 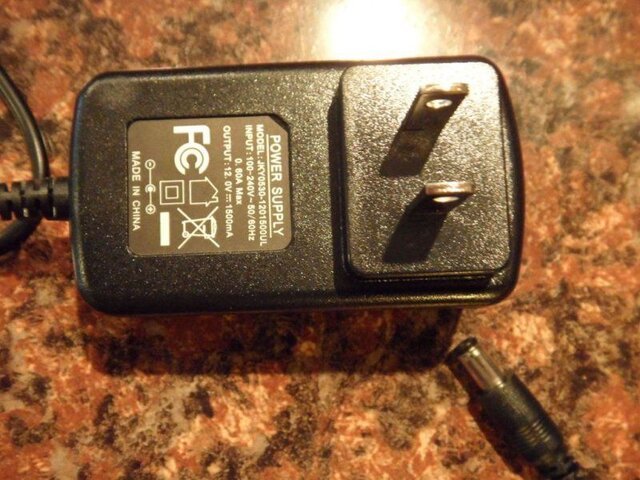 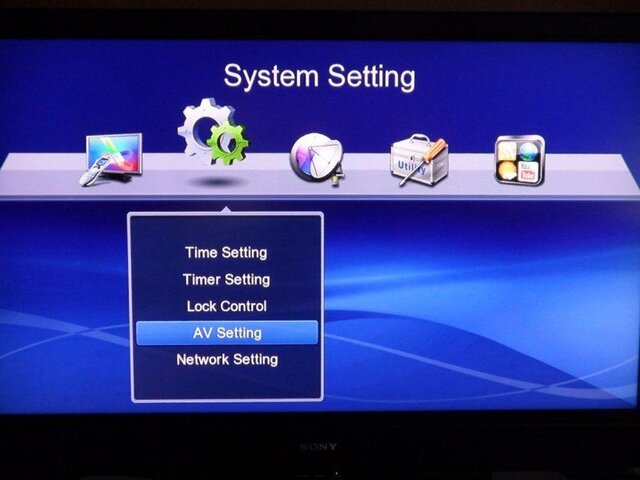 Setup screen whenever 'Menu' button is pushed on remote control 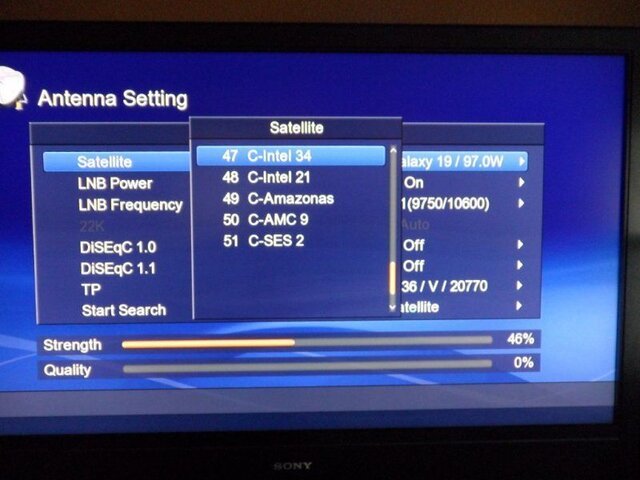 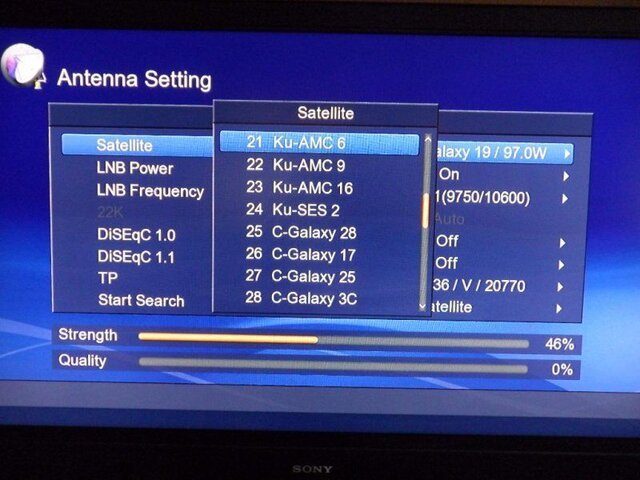 Setting up and scanning satellites was fairly intuitive and similar to other receivers. Most C-band satellites were programmed in, but had to add a few. The display screen for selecting satellites had names and not positions. That got corrected later... 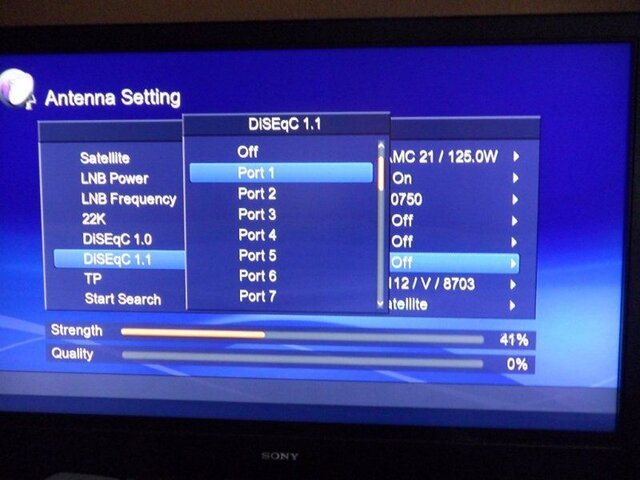 Within the satellite setup screen, LO and diseqc switch options can be selected. 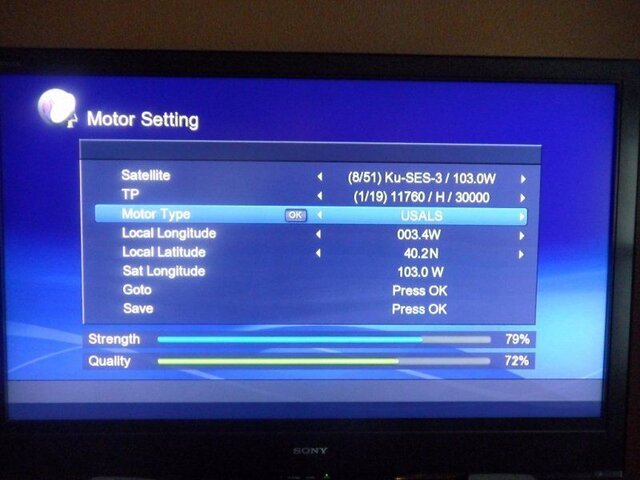 Within the motor setup screen, each satellite can be setup for motor operation with USALS or Diseqc optional. Input USALS for one satellite and it populates the remaining sats that are selected for USALS operation. 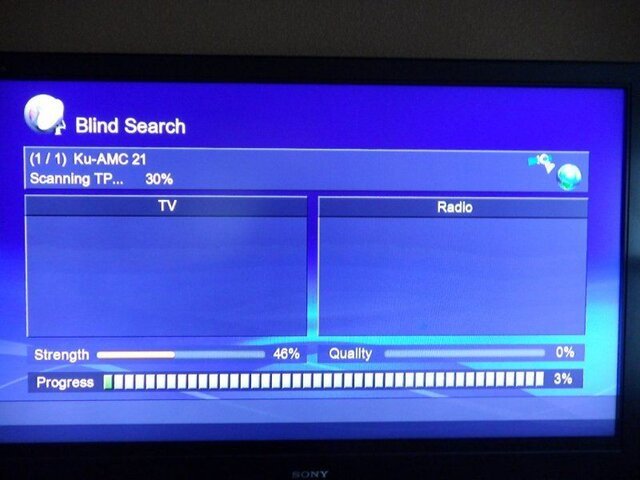 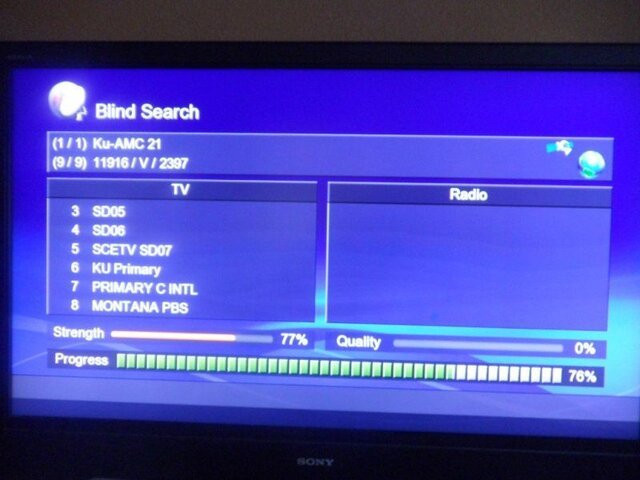 There is an option for Satellite, TP or Blind search; NIT is an option on the former two. Blind scans were performed initially. I didn't time the scans, but they didn't seem extraordinarily long. Most were within a few minutes time. 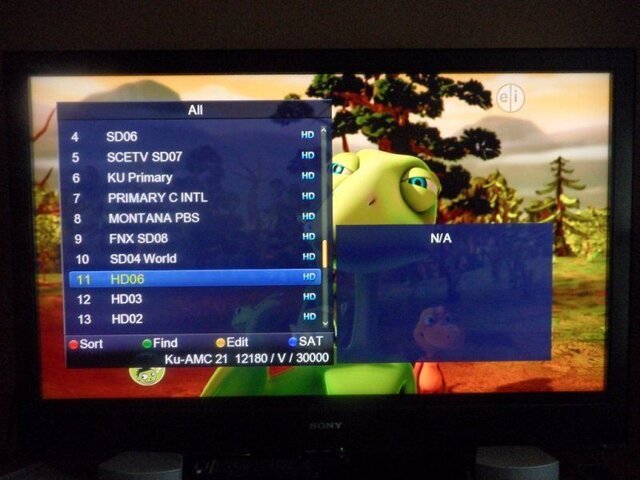 Viewing channels, press 'OK' button in center of remote and brings up screens as above. There is an option in the setup menus to set opacity of these screens. 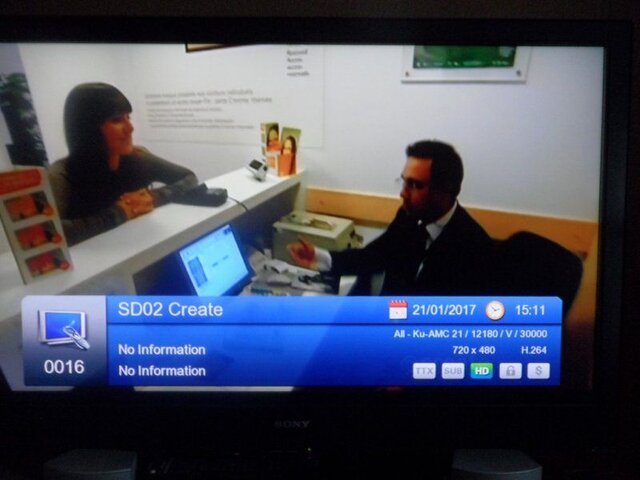 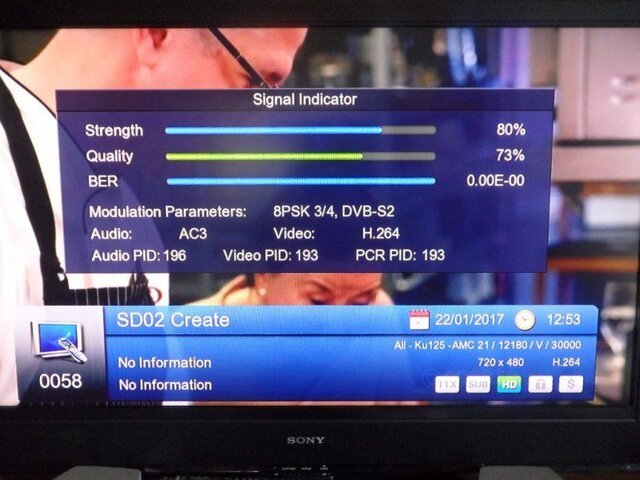 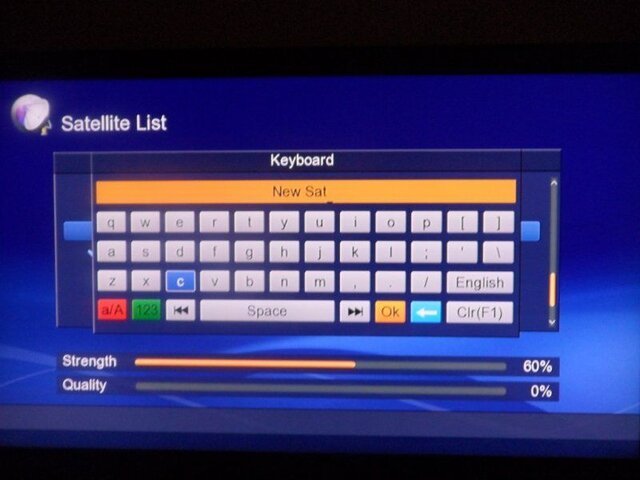 This is the interface keyboard for adding/changing satellite names, changing channel names, etc. 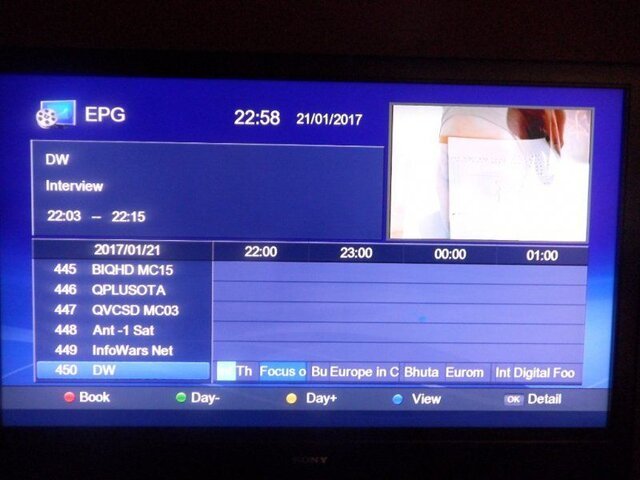 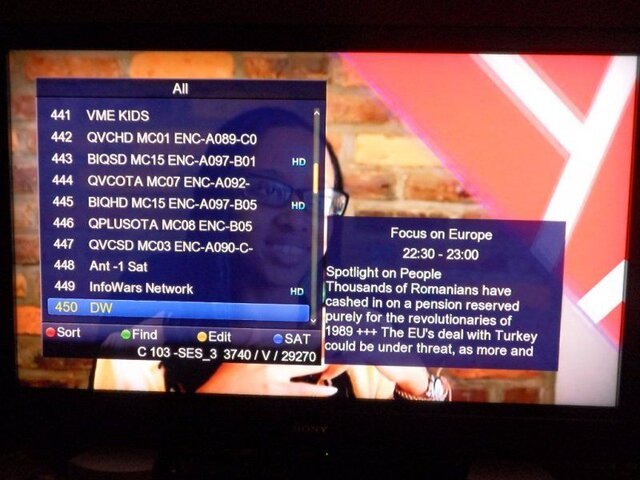 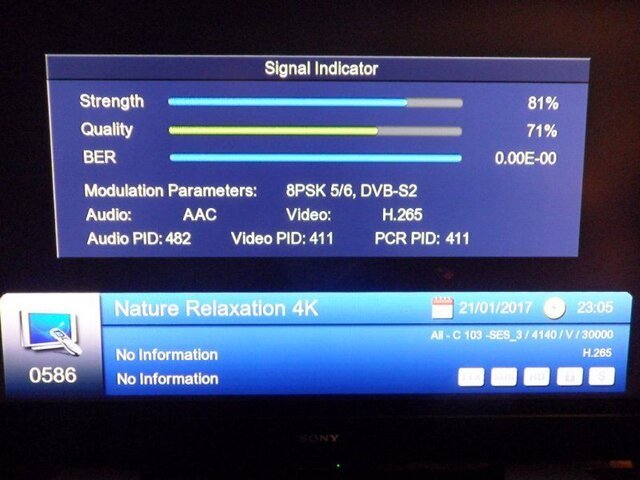 View of screen display information for one of the UHD channels on 103W-C. Audio worked, but no video. NASA UHD scanned in, but no audio or video. Will need to play around with this more.

So notes and observations after using this receiver for a little bit:

Video output through HDMI was on a setting that did not display on my old Sony. Used the supplied RCA cables to hook up receiver and get video settings working.

Setting up C-band, the receiver worked well with the ASC-1. Started at 139W, my number 1 position on the ASC-1 and worked east scanning each position. Had to input a few satellites along the way. Did not setup for the motorized Ku dish.

Scanning appeared to be normal. The transponder with the 'greeting card' channel currently on 127W-C was missed in the blind scan. Input the transponder information and wound up having to tweak that to get lock. Once locked, it scanned in.

The mux on 97W-C that shows up $ encrypted played fine. Changed names of channels in menu and $ remained with new name.

4:2:2 channels weren't the jumbled pixels that I'm used to seeing, but they didn't play.

The audio and video with PBS mux on 125W-Ku were very good. No issues were noted here. Last night on 101W-C, there was some stuttering observed on the culprit channels.

The UHD channels (already noted above). I have not attached a hard drive yet, but will explore this. Not sure if the H265 was to be live playback at 1080 levels or playback recorded content.

While watching 139W-C today, noted the screen froze at the end of a commercial and no response from remote or power button. Unplugged and plugged back in and channel resumed playing fine. This occurred once more on that transponder. Changed to 125W-Ku and watched for a while and no issues observed.

The main stumbling block for me is there is not a 'SAT' button on the remote. I'm trying to figure out the best way to go from one sat to the next without scrolling through the menu of all channels. There is a 'FAV' list and entering channels is intuitive. However, upon opening the FAV list a command issues to go to whatever channel was highlighted and send the dish off to an undesired position.

As a comparison, I'm used to the earlier Manhattan RS-1933 and the similarly functioning Amiko Mini HDSe. My initial impression is its a good box that needs some tweaking. As time allows, will work on setting up Ku motor operations and more scanning.
Reactions: wallyhts, danristheman, phlatwound and 5 others

Thanks for the review Jason!!
Reactions: Jason S

A
OTHER Manhattan RC-1978 changing channel on its own