12 foot rebuild... - Attempting to bring it back from the ashes (1 Viewer)

For reference - I originally posted this which caused the 12 foot to go SPLAT.

A little history, i bought the piece of junk 12' tek2000 dish. It literally came crashing down as the mount was sheered from the winds and the thin junk metal they used. The winds were no means hurricane weather, but it was about 25 mph winds with gusts to 40+.

Over the summer, i landed an aluminum 12foot dish that 'FELL OFF THE TURNIP TRUCK' It was badly damaged. ( i got it for free) . But, it had a BEEFY mount.

Today, i took the mount off the Aluminum dish. (We will call that the new mount) The sleeve pipe was the wrong size, so i then took off the sleeve pipe.

So now i have the aluminum dish mount with a swapped out pipe sleeve that fits the pole i have in the ground.

Next, i had to weld on new cross beams onto the dish so that i could fit to the new mount. I basically had to build a mounting system so that the new attachment system would attach the mount to the mesh dish. Luckily i keep a nice stash of metal rods and angle rods and such, so i was able to build a nice setup. I had to make one trip to Fastenal to get some nice long bolts to be able to do declination adjustments.

I then used the tractor and lifted the dish and set it back down on the pole. It's been about 8 months since it sat on that pole, and not on the ground next to it... So, major accomplishment there.

I still have to fix the damage on the mesh dish itself, as one of the skeleton back bones holding the mesh on separated from another back bone. It will be easier for me to fix that on the pole then off, as its way to awkward on the ground.

I will also need to weld on the pipe sleeve the bracket to allow me to adjust the latitude..

After that, i will be ready to align the dish and do some testing.

It was an exciting day to get the progress done i got done and to see that it wasn't as bad of a project as it could have been. No major issues other then one misplaced weld. But, easy fix as i've learned over the years to do little tap welds at first to make sure all is in place before doing the long bead weld.

I am hoping within the next few days to have a working 12' footer again. I am keeping my fingers crossed. I already have a new venture maxi-ball actuator i ordered a couple months back.

Great to hear! Make sure to post lots and lots of photos. I would like to see photos now of the work in progress.
Reactions: FTA4PA

Here is the Tek2000 pipe sleeve cap. Look how thin the metal is. This was welded on the pipe sleeve and is what warped and tore apart during the wind storm 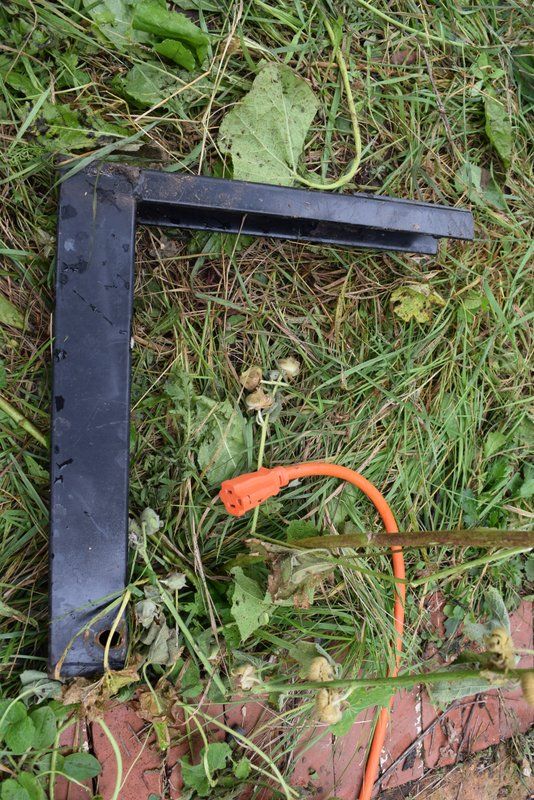 Here is the main pivot bar. The hole at the bottom had a bolt through it and the pipe cap (first picture) that tied this to the pipe cap.

Here is the aluminum dish that i took the mount off from. This is showing the dish after the mount was removed. As you can see, this dish is warped and torn. The mount was in excellent condition. Okay, as you can see, i took the old pipe sleep off the old mount, and used it for the new mount. I welded a cap that you can see above the pipe sleeve. This square piece is like 1/4 inch thick! I notched it a bit on the edge so the dish could have more elevation control. Turns out i didn't need to as it was adjust above and no notch was needed, but no harm done being there. Below is the opposite side of the pipe sleeve. I welded the new mount onto that 1/4 square piece. This is bottom edit of the main pivot arm attached to the dish. I double layered a brackets along with an angle iron to give it more strength. My plans are to add a couple of metal brackets to give additional strength once i have everything aligned. This is the top side of the main pivot arm. That cross arm is about 1/4+ thick Here is a full picture of the new mount. Last part is the elevation control rod. Darn piece was too long. So, i cut out about 3 inches and then welded it back together, and just in case, then added an additional vertical piece welded together length wise to give it extra strength. I have NOT tuned it as of yet, although i did align top of arc and captured 89w and after hooking up the actuator moved it over and successfully tuned in 91w. The quality db is pretty low, and i need to do true tuning. A few panels look a bit warped, and im sure the lnbf holder got off center, so i have a LOT of tuning to do.

Thanks for the updates and pictures.
Reactions: iBoston

I am getting there. I am getting it well tuned. I believe i have the declination close to done. It's been slow because the weather has been wet and rainy. But, i can successfully track 89 top of arc to 139. I will do some more declination testing but its good for a couple days.

I also had some WINDY days, and the BUD held FIRM!
Reactions: KE4EST, FTA4PA and Titanium

Glad to hear it's coming along nicely!
Reactions: iBoston

Okay, well, tuning it has been slow. Its too windy now for me to continue. I am happy to report i FINALLY got a stronger signal than on my 10 footer on one test satellite. I then moved to the other end of the arc and my signal strength was not as strong as on my 10 footer. So, it proves to me i have more tuning to do, but i am encouraged that i did get a signal strength higher than my 10 footer.
Reactions: FTA4PA, hank123, Titanium and 1 other person

Nice work iBoston, don't think you'll have to worry about that mount flying apart like the original. I envy you folks who have the equipment and know how to weld, it was something I never thought I'd need to learn, way back when. They are saying some hot signals on c-band on 72W lately if you're new motor moves it that far, may help your tuning process.
Reactions: iBoston

Just an update.. We have been having 50-60 mph winds for two days now. The great news is the mount is holding firm. The bad news is this mount has swung on the pole about 30 degrees. I'd rather than happen than tearing apart. But, being we are expected to be in single digits this week, it looks like i've lost the dish for at least a few weeks.

Just very happy when i inspected the dish this morning, i was easily (via paint marks) able to see what had happened.
Reactions: Shicks4 and FTA4PA
S

this is why im a firm believer in marking your pole!
Reactions: iBoston

iBoston said:
But, being we are expected to be in single digits this week, it looks like i've lost the dish for at least a few weeks
Click to expand...

My fellow hams always say that it'll work better if you install it during bad weather.
Reactions: k.r.

It's a secondary dish. I blew the driveway and 30 minutes later, it was like i never blew it. The wind is blowing so crazy, if i were to loosen the screws to rotate the mount on the pole, i think i would be asking for a world of hurt. That's OK! Ill wait until things calm down so I'm not cursing. I'd rather be whistling.

Well, i braved zero (f) degrees got out there and loosened the bolts, and rotated it to the marks and locked it back down. No fine tuning... Too cold for that.. But, I got signal back. So, smile on my face... Now, gotta warm my ears back up.. Brrr..
Reactions: hank123, phlatwound, waylew and 4 others

Get her ready for those 16apsk signals, when weather allows. I think more of them are coming.

S
I have an HTS BUD, want to bring it back from the dead.

The 12 foot Unimesh is alive!

S
I have an HTS BUD, want to bring it back from the dead.

The 12 foot Unimesh is alive!