Am I over thinking this?

Issue starts, with me wanting to be lazy and not have to dig up existing pole, find larger pipe and set same. So, came up with idea of having the pipe mount portion fabricated to fit on existing pipe. The picture shows the original (left) and the new mount (right).

I am aware that I may (probably) have to brace the pipe for stability reasons with a 10' dish hanging off of it. But thought it was worth a try, to keep from having to set a new pipe.

My issue is, that when ordered I told them to place the pipe portion flush with front (close to the elevation pivot point). As can be seen in the picture, they did not do that. To me, it appears that they have put an additional 1” arm on this and will make stability, and long term sag to the dish side, a greater problem.

When I picked it up, I didn't register the variance from my instructions. So, am I over thinking this? Or, should I take it back and get them to do it as instructed to begin with? Hopefully, someone with more experience than me can give me some good advice. 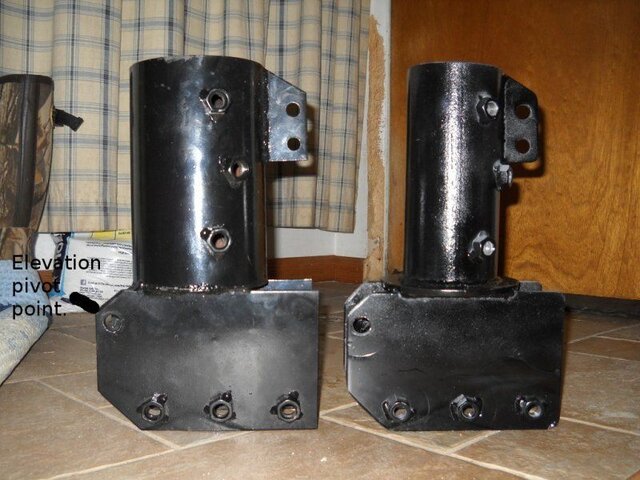 I have done some resizing of masts and mounts. It is good to be aware of the changes of the physics in the new mount. But they did it right, the center of gravity remains the same in the new mount.

My totally unscientific seat-of-the-pants WAG is I don't think the variance from what you instructed them to do will be an issue.

I have never tried putting a 10' dish on that small (2.875") pipe, but hopefully with some bracing it will work for you.

Just thinking about bracing it, my first thought is that one somewhat easy way would be to get three or four ground auger anchors (for good ones try a local farm equipment store), and some plastic coated aircraft cable and cable clamps (large enough to clamp two pieces of aircraft cable together), and a large clamp (like a muffler clamp) big enough to go around your center pipe plus maybe an extra half inch (enough to allow the aircraft cable to pass between the clamp and the pole at three or four places), and maybe some turnbuckles if you want to tighten everything up. The idea is that you put the ground augers in the ground maybe 4-6 feet from the pole at roughly equal distances (in other words if you use three each would be about 120 degrees apart on a circle around the dish), being careful not to place them where they or the cables will interfere with the movement of the dish. Optionally connect a turnbuckle to each ground auger, then loop one end of the aircraft cable around the ground anchor or the other end of the turnbuckle and use a clamp to clamp aircraft cable so it can't pull off. On the pole end loop the aircraft cables around the large muffler-type clamp and tighten that clamp securely, you may also need small clamps to hold the ends of the aircraft cable so they can't slip out from under the big clamp while you're tightening it, or afterwards. Try to make sure the cables are fairly tight and of relatively equal tightness, but don't go hog wild and move the pole. If you have problems with the big muffler clamp wanting to slide down the pole, you could use a second one (sized to fit the pole exactly) underneath the first. Also I'd coat any open ends of the aircraft cable with silicone caulk to keep moisture out. The idea is that a big wind won't be able to bend the pole without encountering resistance from the aircraft cable.

Of course it would be more secure if at least the top foot or two of each ground anchor had a chunk of concrete around it but that's up to you; I'd only think that necessary if you get hurricane force winds. There are probably other ways to do this, even plain old marine-grade rope might work in place of aircraft cable if it's not too stretchy, but all you are trying to do is make it so that no matter what direction the wind blows from it's going to encounter enough resistance to avoid bending the pole. For that matter you could probably build some kind of bracing system using treated lumber, but be careful because wood warps, and modern treated lumber doesn't seem to last as long as the stuff they used to make (when they were allowed to treat it with arsenic), especially in direct ground contact situations. If it's a metal mesh dish I wouldn't worry about it as much, but if it's one of those big old heavy solid fiberglass things then you will probably want some pretty solid bracing, especially if you get hurricane force winds or heavy snow loads on the dish.

L
Hauled this in over the weekend

E
I Am Confused!!

what sat am i on