Built My Own Antenna Analyzer

So sometime a couple of years ago I was just browsing electronic parts like I tend to do and reading around. I came across a AD9850 DDS Module on eBay for around $8.

I researched a little and saw where people where making homemade VFO's with them, using Atmel and PIC chips or Arduino boards, Parallax, etc micro-controllers. I thought hey I could make a signal generator or something with this board. I ordered it, it came in, and I stuck it in a drawer, with other misc. items I impulse buy on eBay.

Some time early last winter, I came across it in the drawer and decided to research a little more and see how hard it would be to at least hook this up and make it do something. Actually I found a project using an Arduino Uno. I downloaded it, and modified the code to work with an Arduino Due(because that is what I had on the bench at the time). I hooked up a TFT display and rotary encoder and ta da, I could tune 1Hz to 30MHz and a little past and get an output. Although it got pretty low after 25MHz it was still outputting. Nothing a buffer amp would not fix if I decided to go further.

An interjection is necessary here. I have read several of Jack Purdums books on programming in C. A few years ago I didn't even realize he was a ham. Recently he wrote a book about Arduino and ham radio projects and a light went off in my head. I am also a member of some Yahoo! Groups dealing with ham radio related stuff. Wait a minute, Jack W8TEE is the author of the books I have read in the past.

Okay, back to it. Anyway he is working on a Antenna Analyzer project, that will be coming out in a future issue of QST. He gave some of us in the group a link to some of his progress, so from there I got really interested in doing something more with this DDS module.

I started gathering all the parts to go from his schematic and parts list. Then a few weeks ago Brian Gohl, AI6US aka Titanium on here, was talking about Antenna Analyzers with me. I told him you know what I will just build my own. In fact I have built two of them now and they are working very well.

Now mind you I want to give all the credit to Jack Purdum, W8TEE and Farrukh Zia, K2ZIA, I just took their rough draft write up and put it all together. I have since went in and made changes to the code to suit me like colors and looks and such on the screen. Add a couple of screens and things like that...I have not modified the core functions/methods that do all the heavy lifting and it works great.

It all runs on an Arduino Pro Mini (Mega Version) you will see in the picture below beside the AD9850 Type II.

I got permission from Jack before I made this post and his only request was that I not post any of the particulars and source code until the final is ready and it is in QST. So stay tuned to QST and you will see this again soon! 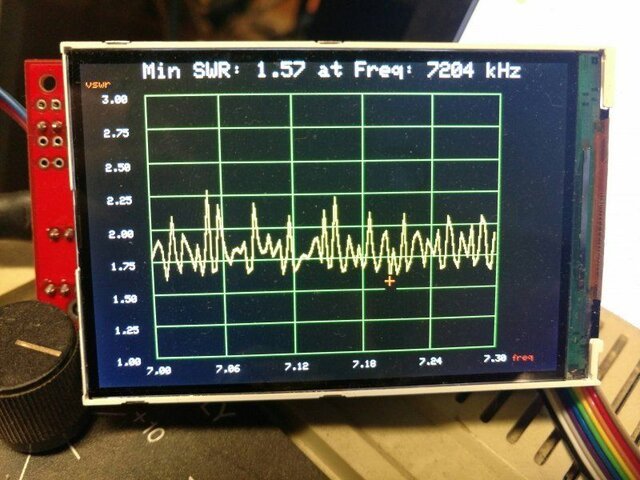 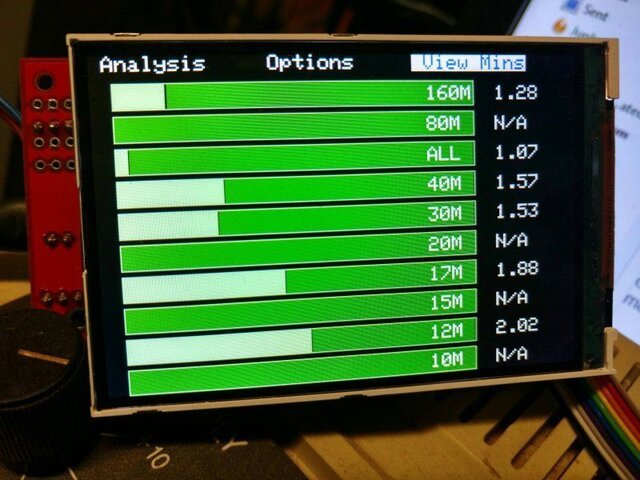 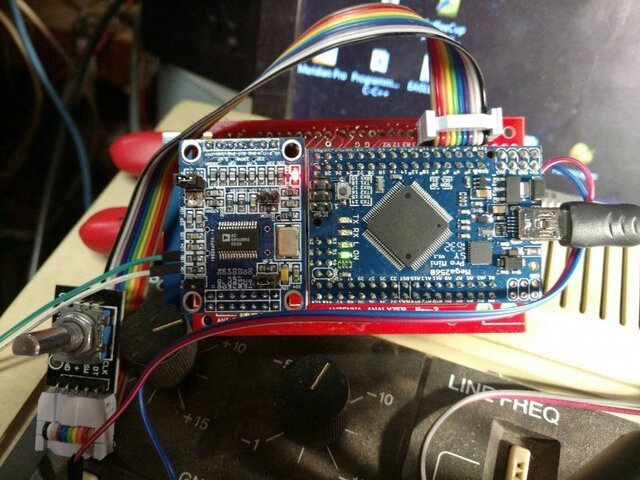 You will see the DDS Module on the left and the pro mini on the right.
Below you will see it is all operated with a single rotary encoder for the time being. Just turn the knob to select what you want from a menu and push the built in button to select.

I just got to get this thing cased up with a power switch, battery holder, SO-239, etc.
Reactions: fred555, martin-f, spongella and 9 others

So I was looking at the SWR I posted last night for 40 meters and thought, man that is a little high. Compared it to some scans the other day, and used my SWR meter and yep it is higher than it should be.
So went to bed got up this morning and it was laying here so I hit scan again and it had jumped to 2.5 to 1. What!!!!!
Double check with the meter, yep, so my circuit or software isn't going crazy.
So went outside and sure enough one side of the dipole had came loose out of the tree. We were having some pretty high winds last night.
So got that back up in the air and... Picture is a little blurry, but YEP that looks better.
Reactions: fred555, martin-f, spongella and 3 others

BTW, the screen I am using is a 3.5" TFT for this project. I had a 2" or 1.8" TFT and it was kinda small and 5" was just too big. Jack uses a 3.6" on his so I guess he done went through all that and found that to be a good size. Although a small one would be just fine if that is all you had. I am also using the built in SD card reader/writer in the rear of the display and I can saves thousands of scans, much more than the high dollar commercial units that only allow a few saves. Also saves in standard CSV format, so you know what that means. 100 scan points per scan too, and not a dozen like the high dollar rigs...all in less than 5 seconds
Reactions: fred555, Tecnicoloco, mikelib and 1 other person
K

Can u use an Si570 for Lo too?
Also whats the freq range of the directional coupler?

I don't see why not. It would take some code and circuit modifications obliviously.
That is one module I have yet to order, I have looked at them, but do not have any myself.

That I do not know for sure, but with it all being though hole, and the component values used, I would say probably limited to around 60-70MHz.
M

Hey Michael, just thought I would jump over here and give you a shout. I was thinking that this was your site. Good job on the AA project. I think I tried to register RCC, when I signed up here to learn about Satellite stuff, but it was taken. Have a great one.

Howdy RCC, looks like we have more than one hobby in common.
K

Uploaded a short video to YouTube about this project.

For those that subscribe to QST, turn to page 40 of your November 2017 issue.
Reactions: Titanium and lost_mesa

My membership ran out in the spring. I'll have to wait until I signup again and read about the project online.
I'm getting an analyser from Fox Delta. I don't trust my MFJ.

Go here: QRPGuys.com
Then go to Tuner/Antenna Products at the top of the page.
Then down to W8TEE - K2ZIA Antenna Analyzer.
There you can not only buy the PCB, but it has downloadable instructions, schematics, code, etc.
Reactions: jorgek
C

Hi...i am a new user here. As per my knowledge you should be able to use any splitter that is labeled to cover the correct frequencies. Most splitters I have around cover 5-2000MHz, some older ones were only designed to cover 5-1000MHz, but they'd also work. Keep in mind that a 2-way splitter will reduce the signal by 3.5dB on each out leg (50-60%), so it will only work if you have good enough signal.

CoraDias said:
As per my knowledge you should be able to use any splitter that is labeled to cover the correct frequencies.
Click to expand...

Does anyone is familiar with handheld spectrum analyzer Hexylon?