I see a lot of us not only share a FTA hobby but a love of cats. Many people don't and that's ok. But I love my little buddy and he spends a lot of time helping me with the dishes. His name is Rowdy, A Snowshoe Siamese and cherished member of the family.
My Avatar

Hmmm. Can a cat, one with all its claws, climb to the top of a mesh dish? Assuming the dish is low enough to hop onto.

I asked the cat, his reply is:

I could easily jump up there, but, Why? You're trained better than that. But if you were to put me up there, I'll just jump off 'cause there's nothin' tasty up there. Then I'd just give you the what ya put me up there fore? look.
Click to expand...

Snowshoe cat? Now that is a neat paint job, don't remember ever seeing one that colorful. Neat pics Magic! I have to dig up one of the new cat around here, she's been here almost a year now, adopted from the local shelter. My avatar picture is a wild thing, started coming around here last year, couldn't get near him at first, but he's really improved to be a friendly pettable varmint.

RT was almost 6 weeks old when I saved him from a dog pound that would/did bump off his mother and his brothers and sisters. He was so small he could run right straight through the 2" X 2" holes in the lattice work on the side of the deck. That was 11 years ago this past June. Now his head is so big he can't even get his nose into the hole and he is 19 pounds. He also has me well trained! 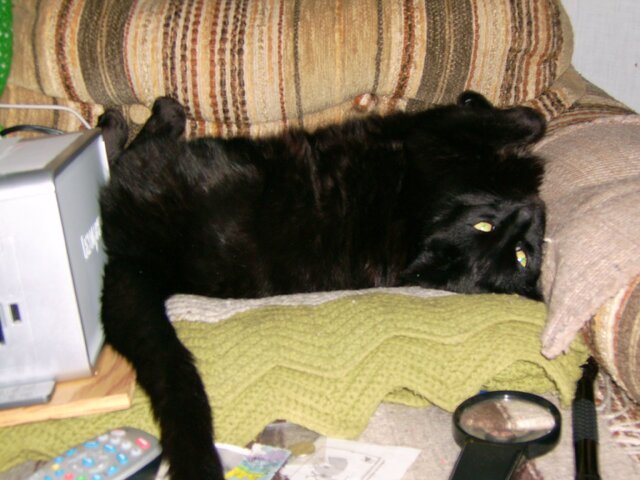 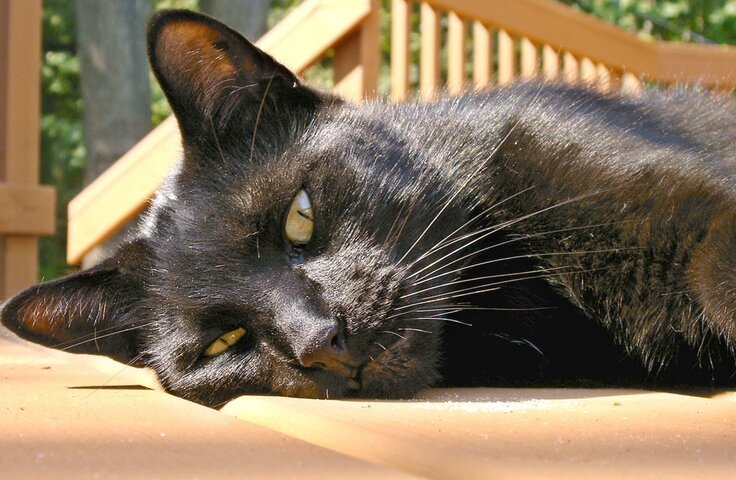 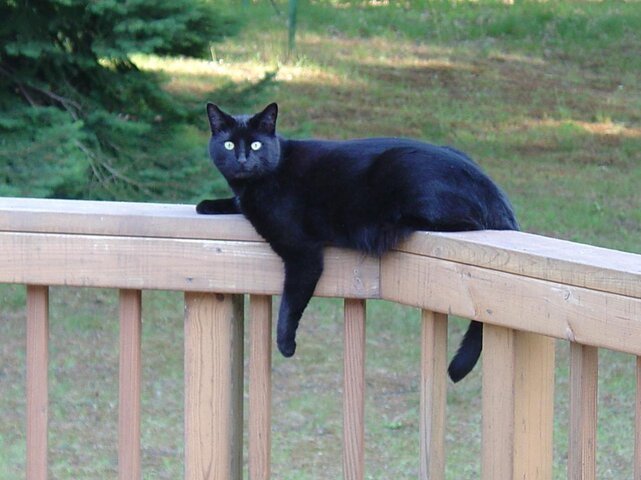 No bark. Got the name when Dad said "he follows me around like a puppy", so it stuck. And is kinda fitting, as he'd rather "do the duty" outside. We'll hear him cry, sitting at the door, to go out. Will only use the box if the weather is really bad. Favorite place in the house, shown in picture.

Sounds like RT. He goes out his cat door and wanders around the house. On 10 acres of woods, good space to any other houses, he is as safe as can be when outside. He is just like me, he HATES WINTER. So, stays inside almost all the time with snow on the ground. 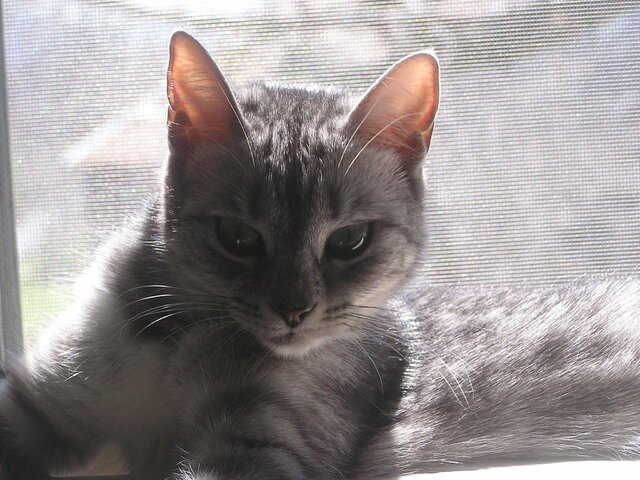 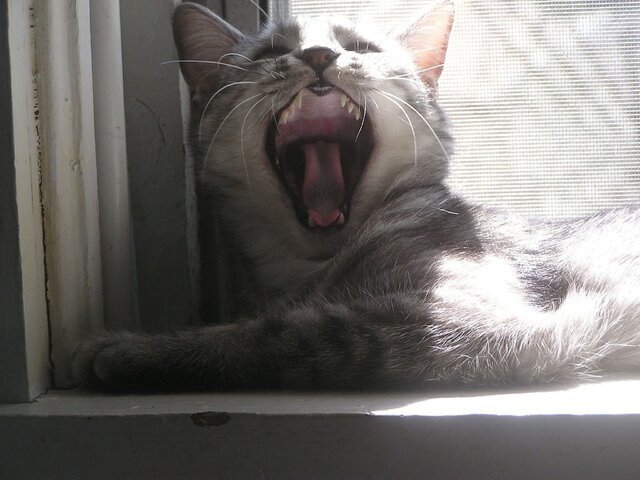 Oh yeah, I love my little cat like 1 of my own. She stays inside most of the time, I only let her out supervised. Jack Russell terriers roam the neighborhood & when I see them out comes the BB gun..........My little sweetie is a pound rescue, she'll be 2 this fall. Her name is Gabby, but we call her pip, short for pip squeak because she is such a little cat. She reminds me of a flying squirrel the way she literally flies through mid air, when cranked up on kitty dope. Anyway I'm glad to see some other cat people on here.

3 cats...Black one is Trinka...White Turk is Jolie....Cameo Turk on my lap is PJ . At night , it's likely that at least 2 are sleeping along my left side.

Two kitties here and maybe a third soon.I do like dogs also but have always favored cats.The name of my two cats are Muffin (7 yr female) and Laser (5 yr old male).Laser loves to get my wifes attention in the very early mourning hours by knocking something over! my wife will get up and put him into the sun room for awhile!Im thinking thats where the cat wanted to go in the first place but cant because its getting colder and the sun room door to the rest of the home is closed.Muffin is a crazy wild gal who loves to follow me around alot of the time.Here are a few pics.Laser is the orange and white tabby.PS MY wife enjoys taking Laser out for walks as you can see and laser enjoys the ride.Both cats are indoor cats.

One of the outdoor varmint

This is one that came along last year, and I coaxed and talked to him enough to stay around most of the time now. Of course the free food doesn't hurt either. He comes and goes , but is usually outside. WIld as a buck sometimes, but a friendly cat when he wants to be. Don't wave an umbrella around him though, hehe, he's gone like a shot.

turbosat said:
This is one that came along last year, and I coaxed and talked to him enough to stay around most of the time now. Of course the free food doesn't hurt either. He comes and goes , but is usually outside. WIld as a buck sometimes, but a friendly cat when he wants to be. Don't wave an umbrella around him though, hehe, he's gone like a shot.
Click to expand...


Good story ! My mom had a feral cat that visited her, and after a year or so, actually moved in. He got fixed, shot up and spent the last 8 years with her. He's slept on my lap a few times.
D

turbosat said:
This is one that came along last year, and I coaxed and talked to him enough to stay around most of the time now. ...
Click to expand...

Dishman Dan, you got me! I thought that didn't look right lol. Now I gotta look it up because I have forgotten how to spell that correctly.
OH, I would have to use RG6, that 59stuff is too lossy.

edit: After consulting the online thegasaurus, it appears I used the word correctly after all! Though most of us don't recognize it as anything but cable.
D

The other common use of that word is for ordering soft drinks,

OK, I will have to get the camera out and shoot.

"The only thing cats are good for is moving target practice". And, "The only good cat is a dead one."

That was before we moved here and had such a mouse problem. After a year or two with about 5 feral cats (AND NO MICE) I literally prayed we could have at least one cat we could enjoy and pet. The next day we got a baby whose mother was a victim of a rattler. I got him to drink from a straw, and then a saucer. The day after that a feral mother had trouble and we helped her with 6 babies, which she raised for two weeks in the motor home. The following day we got a newborn, born in the rafters and it and 13 others dropped 16 feet to the concrete floor. Four survived the fall, but only one survived a week and she has had her first litter of 5, plus she adopted a sick one and raised it. She is the orange one in the avatar.... I think the current count is about 20! The black one was one in the litter of the feral cat, EDIT -- that is the one we call Boots. (thought it was Midnight but I saw the white paw).
Last edited: Sep 20, 2011

stanleyjohn said:
.......MY wife enjoys taking Laser out for walks as you can see and laser enjoys the ride. Both cats are indoor cats.
Click to expand...


I wonder what people look like when they say to the wife, "May I see your baby?" That would be the time to let out a big meow!

I wondered how long it would take for someone to post a disgusting statement about cats and destroy a very nice thread.

But read the rest of the post! And what I did not say was that I have been deathly allergic to cats all my life, until we got the grey bundle we call Shalom. God answered my prayer that we could have at least ONE CAT I could pet....

Now I have had cats sleeping on my face. My kids have seen my eyes and nose swell shut and now can hardly believe I can tolerate cats. You should have seen me during a lightning storm - 14 cats / kittens piled on me. They were afraid.

R
Not so serious - Favorite Avatars!