In the process of installing 30' tv antenna tower (1 Viewer)

Toggle sidebar Toggle sidebar
You are using an out of date browser. It may not display this or other websites correctly.
You should upgrade or use an alternative browser.
Register Today to see less ads! It's Free!
T

Here’s the story about the WAQP antenna

It had to be modified after it was built!
Register Today to see less ads! It's Free!
T

It is possible that the terrain differences coupled with the extra height if the new tower may be causing WFFC to be in a “cold spot” while WMNN is in a “hot spot”. If so moving the Televes antenna up or down might solve the problem.
Reactions: primestar31

Well for now, I left the Dat Boss LR up on the top of the tower, about as high as I can get it. It has the active dipole installed, which has a integral preamp. It's presently not connected to my system, though I did connect it to a ground block with a terminator on the other side. Don't want static build up to cause any possible damage while I wait to see if anything changes in the future.

So, with the outboard Televes 560383 preamp in the systems box, its input is the CM4228HD antenna on the 27' mast pipe next to the tower through a UHF -side power-pass UVSJ (the Radio Shack one). The Y10-7-13 VHF yagi up on the tower under the Dat Boss LR, is bypassing the preamp at present. It goes through a separate MCM Electronics FM filter (I have EXTREMELY high FM nearby, on station 94.5 that comes in higher than my highest power tv station) then into the VHF side of the UVSJ. That antenna has enough margin, that it doesn't really need to be pre-amped.

So in effect, I have 3 antennas installed, (2-UHF and 1 VHF) but only two at present are actually being used. So far all my UHF (WFFC-LD included) are received perfectly on the CM4228HD antenna on my original slightly lower mast pipe next to the tower.

Sounds like me chasing WLOS here in Greenville They are supposed to cover us but don't. They did put a 50 watt repeater on Paris mountain, close to me, but still hit and miss. 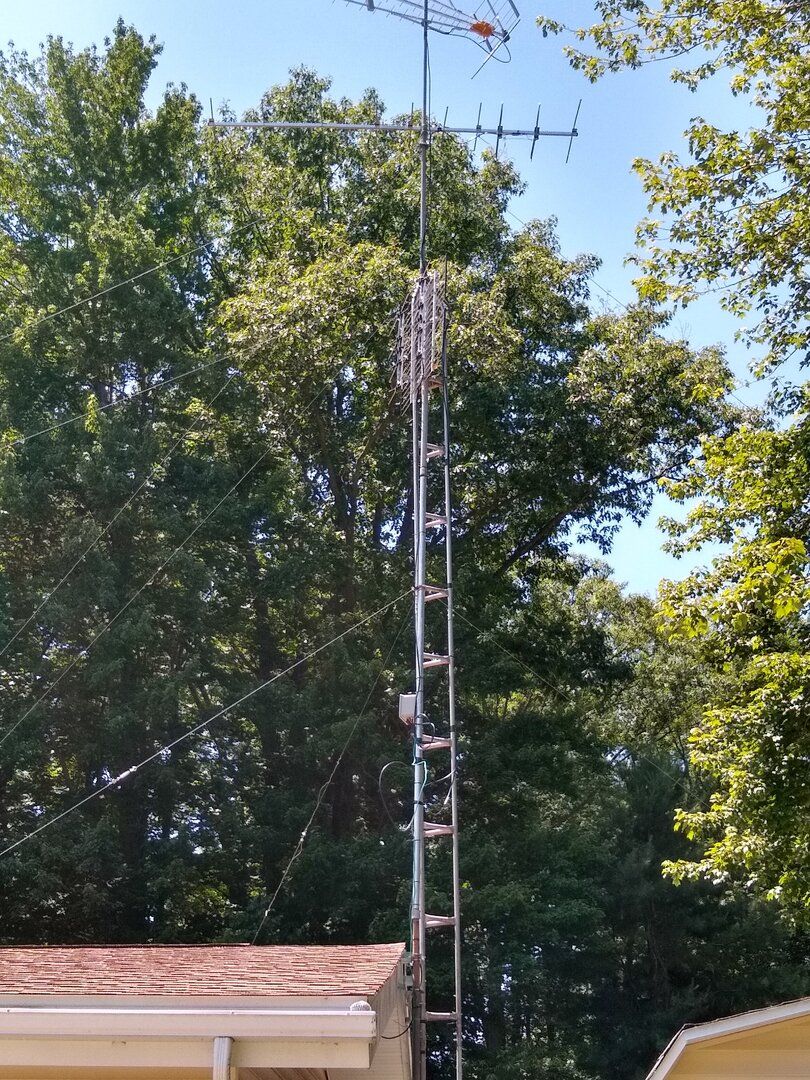 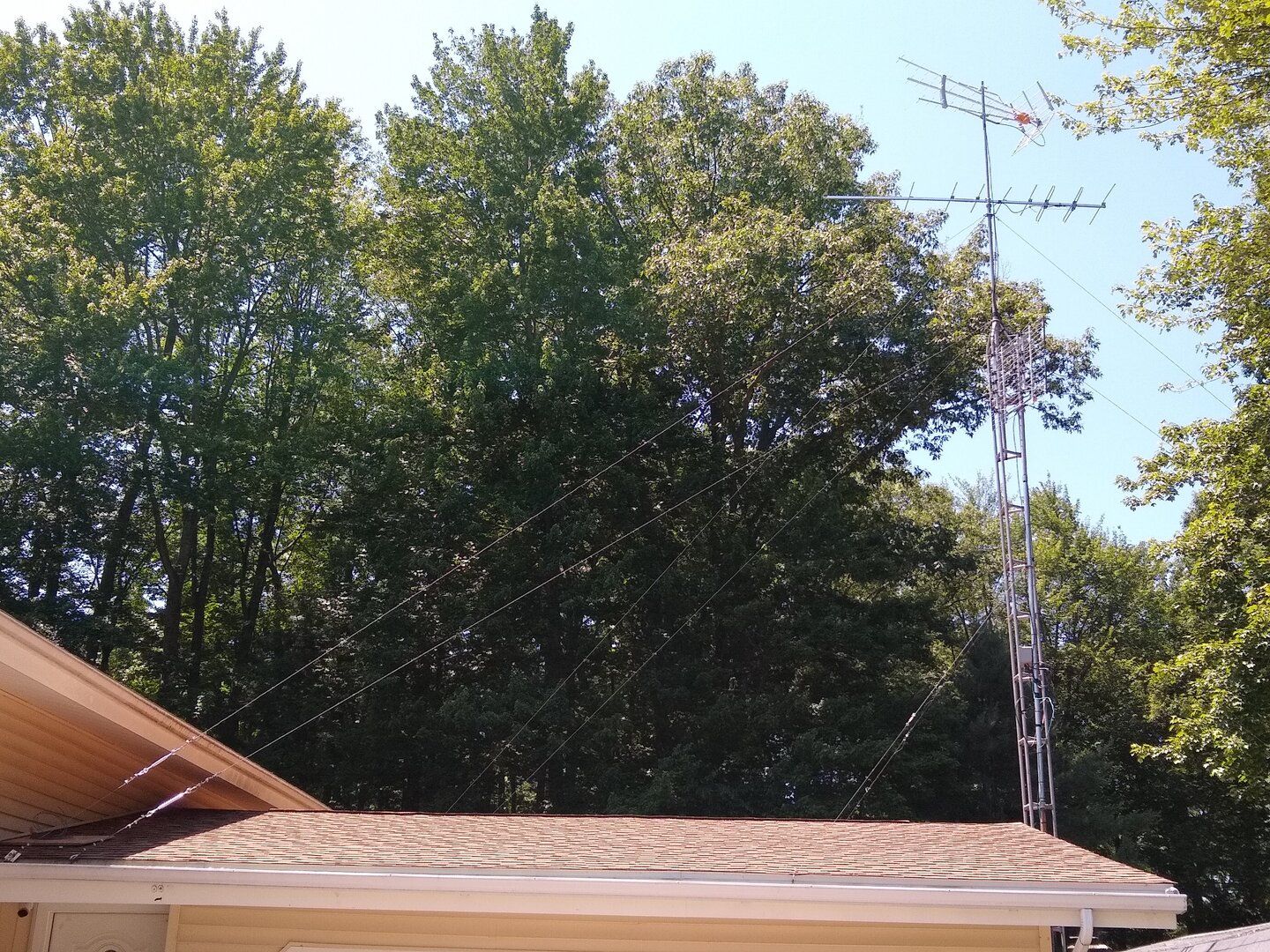 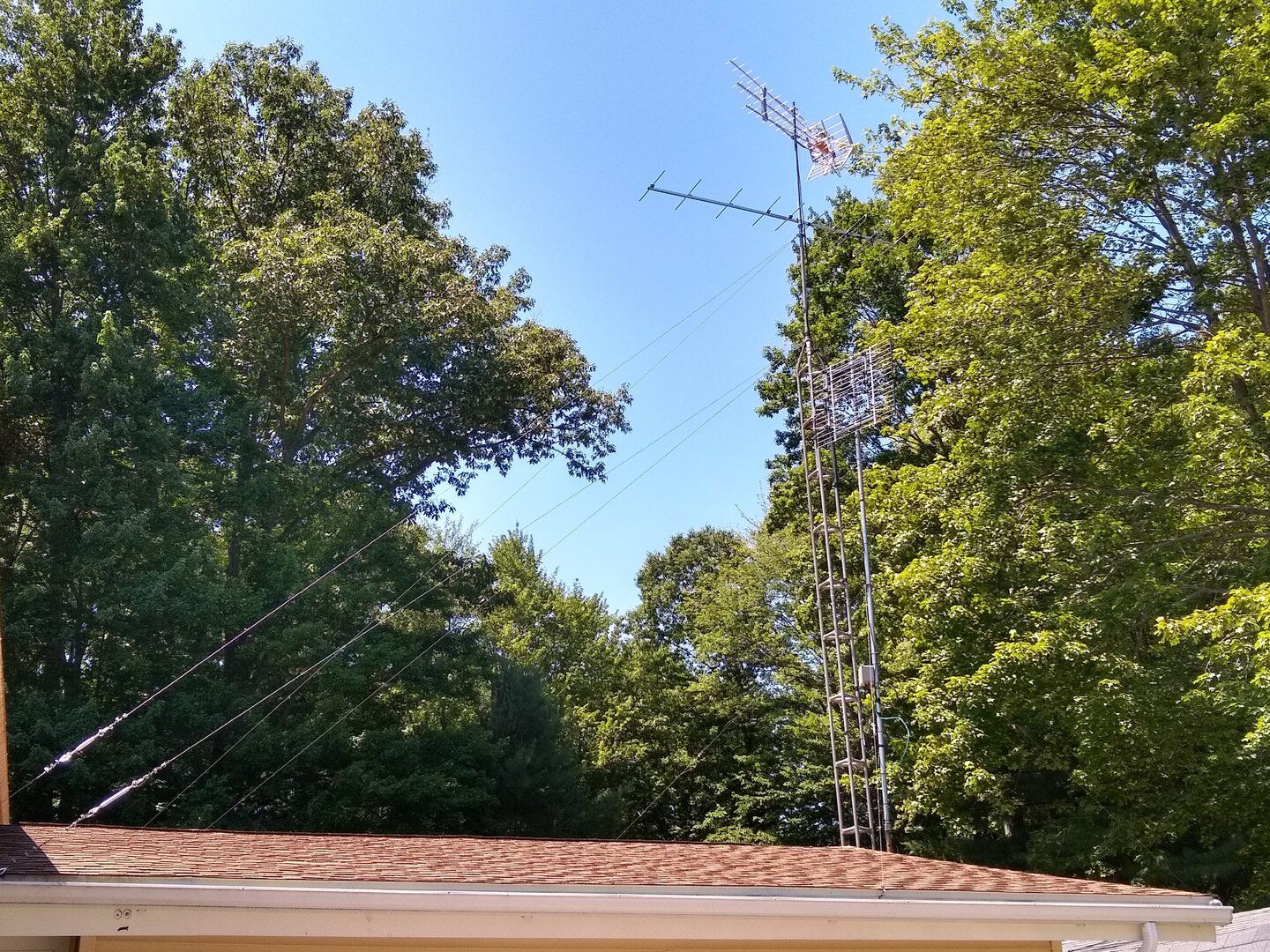 I still have a little clean-up to do. Such as replacing the old equipment box with a new slightly larger one, and taping down all the coaxes properly, and properly grounding the tower itself to the service entrance ground. I also intend on replacing the smaller and lower guy wires (lower because the two previous antennas on here needed them to be lower) on the 27' mast next to the tower that now has the CM4228HD on it, by raising the guy ring to just below the CM4228HD and installing 6/18 steel guys in place of the older ones, with new turnbuckles and properly tensioned.

Tower has now been officially properly grounded to the ground stake next to it, which is bonded to the service entrance ground rod.
Reactions: Foxbat, k.r., Trip and 3 others
Register Today to see less ads! It's Free!
Previous Next