New location of my 90cm Prodelin

Two years or so ago I got a 90cm Prodelin offset dish antenna for Ku reception. It is built like a tank and works way better than any of those crappy Fortec Star or similar offset dishes. If you have any of those, just throw them away like I did mine. It cost me almost $300, and I think $60 or $70 for the dual polarity kit, but it is well worth the money. It's the most stable and rock solid dish I've ever used. It's a commercial dish of course, but for the constant good signal it suppies, it's well worth the money. A Zinwell Ku LNB was sold with it, which work really well and are really stable, they are typically used for Muzak services. Here are some pics of it where I had initially mounted it, on an old and wobbly wooden picket fence: 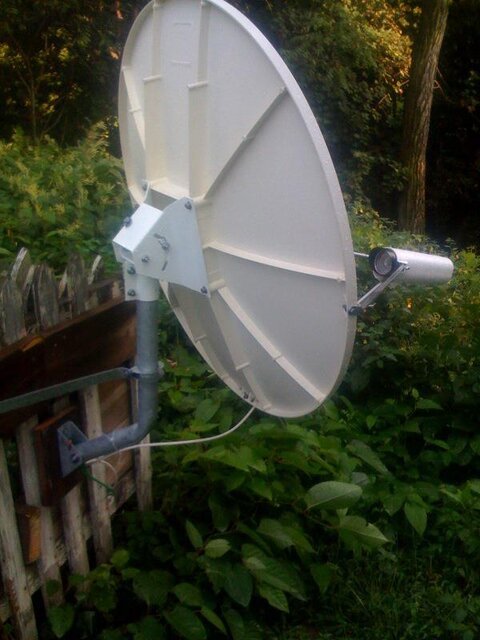 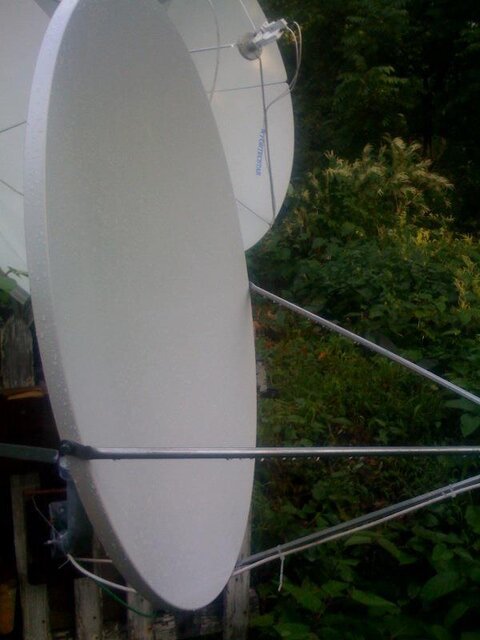 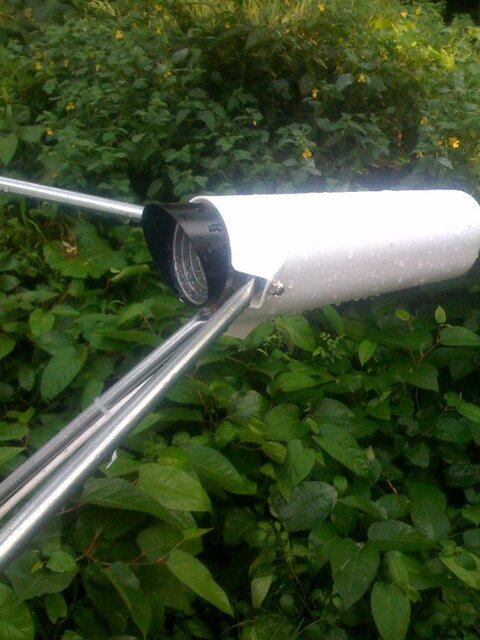 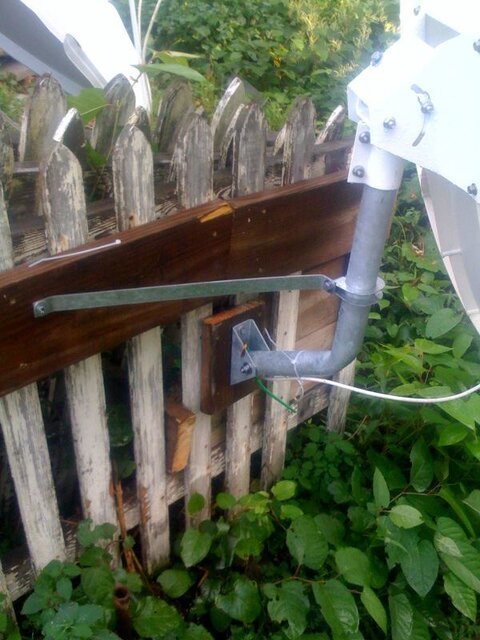 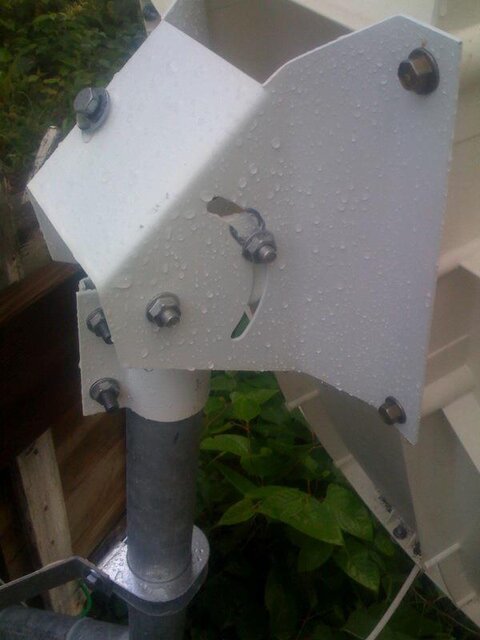 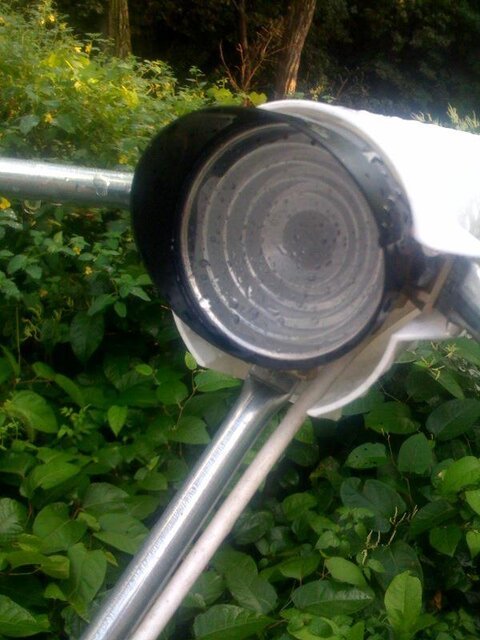 I bought it specifically for trouble-free reception of PBS's HD east and west feed on AMC 21. Other than the wobbly wooden picket fence, it provided very stable signal. Later I bought the dual polarity kit and another Zinwell LNB. This included a feedhorn that outputted both polarities (the single feed feedhorn only outputted one), a waveguide splitter, and used another Zinwell LNB: 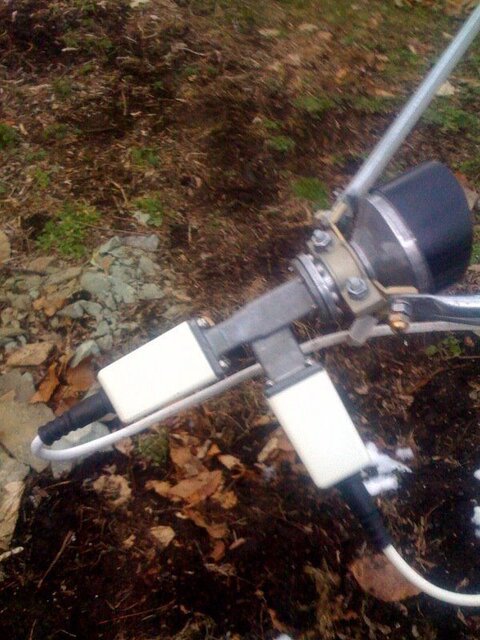 This was for horizontal reception as well, mainly because I wanted to mess around with some horizontal feeds. Because of the wobbly wooden picket fence, I decided to move it. The signal would be great after I first adjusted it, then gradually go to crap. So here are pics of it in it's new location, near my Directv dish: 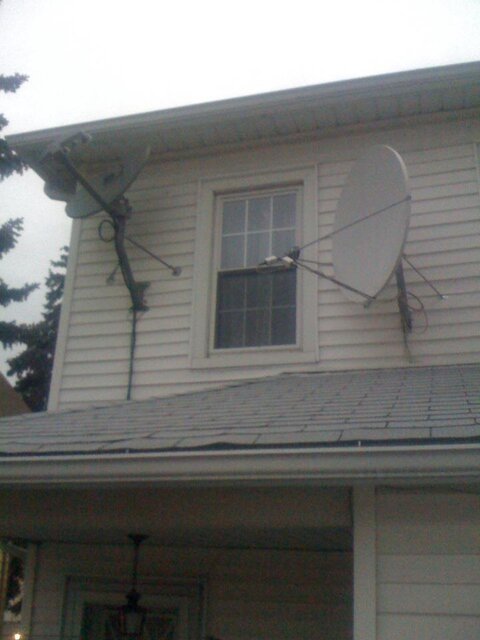 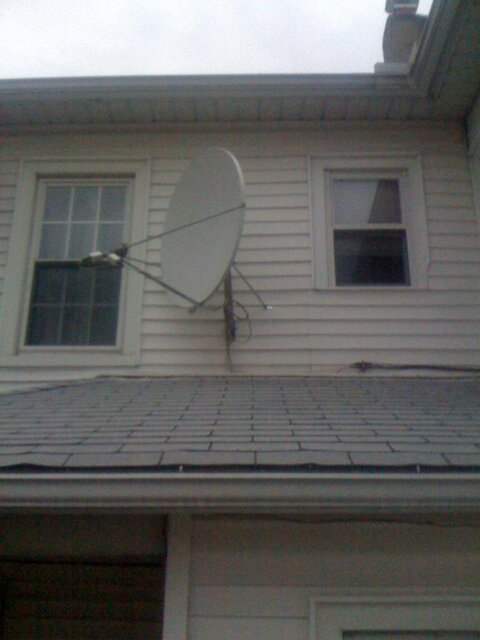 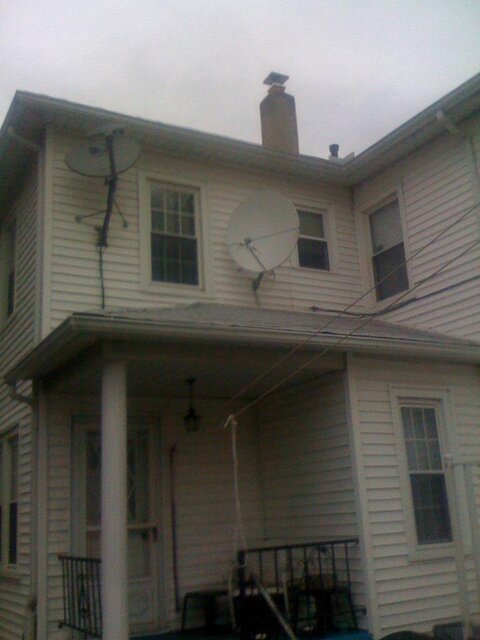 Now the signal is rock solid stable, and PBS HD east and west come in good and strong. Here is a graph of BER since the relocation for this past week and past two weeks:

Here you can see the signal is much more stable with the exception of rain fade, which will be more prominant than Directv because the signals are not as strong as Directv. This past wednesday it rained heavy all day, so there was a lot of rain fade. Compare that to last year when I had it mounted on the wobbly wooden picket fence. In the latter half of the spring, all of summer, and early half of the fall, trees and Japanese Knotweed prevented any reception at all. I hated missing PBS during these times. Here is the unstable reception of it mounted on the wobbly wooden picket fence:

I was just afraid to get on the roof and run the cable, but it paid off when I did finally relocate it.
D

Years ago when I had DirecTv I kept the dish on a 4 foot pole so I could clean the lake effect snow off without climbing. Hopefully you do not get much snow! One of my Primestar dishes says Prodelin on the back and it might be the same dish! I have it in the barn but I will check tomorrow to see if it is a 90cm or what.

Dishman Dan said:
Hopefully you do not get much snow!
Click to expand...

Because of where it's pointed to (125W) and the dish is offset, it's almost 90 degrees so snow doesn't collect on it at all.

Why thank you! I went to Prodelin's web site and contacted a sales rep. There is a wall mount and ground mount available for this dish, as well as single or dual polarity. If you want to use an LNB that will work with 13/18V switching, get the dual polarity kit and the Invacom LNB with waveguide input. Otherwise, the Zinwell LNBs work beautifully. You can find a link to the datasheet at http://www.gdsatcom.com/vsat/datasheets/1000-007.pdf. It's series 1921. You can get larger sizes too, but this is .92m and performs well.

You can often find it or its siblings, the 1.2 meter and 1.8 meter versions, on the rooftops of closed gas stations and department stores. When they re-roof the business (or tear the building down), ask them to hold the dish for you. These, along with the Channel Master dishes, are excellent commercial dishes.
G

" the dual polarity kit and the Invacom LNB with waveguide input" also came from Prodelin direct? I have a couple of the same single polarity lnbs as in the photo and could certainly use the waveguide splitter Ts. Thanks

Tron said:
You can often find it or its siblings, the 1.2 meter and 1.8 meter versions, on the rooftops of closed gas stations and department stores. When they re-roof the business (or tear the building down), ask them to hold the dish for you. These, along with the Channel Master dishes, are excellent commercial dishes.
Click to expand...

Unfortunately I couldn't obtain one this way. Plus you need to deal with missing parts on occasion too. These kinds of dishes typically contain BUCs as well because they are tx/rx dish antennas. Whether or not the BUCs transmit at the same or opposite polarity as the receiving signal, I really don't know. But I urge anyone, that if they can get their hands on one of these dish antennas, to definitely do it. Their performance and stability will absolutely blow away anything else.


guacharaca said:
" the dual polarity kit and the Invacom LNB with waveguide input" also came from Prodelin direct? I have a couple of the same single polarity lnbs as in the photo and could certainly use the waveguide splitter Ts. Thanks
Click to expand...

You cannot get the Invacom LNB with the waveguide input from them, it's a consumer LNB, Prodelin doesn't deal with that. The reason I suggested it is because most of you use FTA receivers which use 13/18V polarity switching instead of running two feed lines with two seperate LNBs like I use. I run the feed lines to an active L band splitter and power inserter, then to commercial IRDs for my setup, while most of you use FTA receivers. The 1921 series dish antenna comes with it's own feedhorn, so it's not wise to use an LNBF unless it can connect directly to the feedhorn. It comes with a feedhorn for feeding only one polarity at a time, not both. For both polarities, you need the dual polarity kit which will come with a different feedhorn that has a larger opening and the waveguide splitter. The Invacom LNB is the only 13/18V polarity switching LNB with waveguide input that I know of, I think there are others. If you don't need 13/18V switching, Zinwell, Norsat, or Cal Amp Ku LNBs are like tanks! Perfect compliment to a good commercial dish antenna.
Last edited: Dec 18, 2011

J
Just pictures of my 90cm

Pics of my Prodelin Ku Rx only .92m

F
Getting rid of my 1.2m Prodelin dish and stand FREE!

Is my 90cm Geosatpro warped?