FWIW- I also love the user interface of the Pansats. Actually seeing the channels as you edit the channel list or review scanned in channels(9200 and 3500). I can't say if that's still true with the 9500, I don't have one. (I think the 9500 and S9 are closely related)

1)Price(?). S2 'out of the box' with the 9500. 9200 requires a S2 module that's near the price of the 9500, unless you get lucky and find one with the S2 module in fleabay. Usually the privately sold units have the hacker board.
2) Heat. you can keep your mug of HC or coffee hot with the 9200. Mine required a fan. Heat sink mods-alternatively.
3) Stability. 9200 becomes unstable when nearing 1000 channels in memory[at least mine did, when near 800 it was time to delete]
4) Age. Don't expect any further development in 9200 FW. (The clock still SUCKS)
5) Scan speed. Think my Openbox is at least twice as fast as my 9200.
6) 9500 uses common USB interface for DVR-HDD, 9200 uses eSATA.
7) 9200 included audio codecs are not as complete as the 9500(?) My S9 get's the audio on all fta channels. My 9200 did not.
8) Not trying to dissuade you from getting 'hands on' experience on the 9200, but if you're looking for a convenient, trustworthy unit, I don't think the 9200 'fills the bill' today.[IMHO]
Don't get me wrong here, the 9200 was my 'workhorse' for a long time. It rarely missed a channel. My S9 misses more than I would like. After a blind or Accurate scan, a Preset(TP) scan, almost always finds a few more channels.(I had forgotten about that until reminded in a thread a while back)
Sorry I can't comment directly as to the 9500. I'll leave with just saying I think the S9 and 9500HDX may be closely related, and therefore may be comparable. Owners of both Pansat models, it's your turn to comment. I would have been one if the S9 came out well after the 9500HDX, but that wasn't the case.
.
Last edited by a moderator: Jun 25, 2012

[FONT=&quot]Having owned 2 Pansat 9200hd receivers I like my Pansat 9500hdx for the following reasons:[/FONT]
[FONT=&quot] [/FONT]
[FONT=&quot]1 Both 9200hd units had heating problems (which I resolved but they still required fans - methods). The 9200hd processer always runs unless you totally remove power via the switch under the front cover door. The 9500hdx does not start the processer until you push the on/off button. The negative aspect is that it takes about 10 seconds for anything to show on the screen while it boots. The cabinet of the 9500hdx remains near room temperature on or off. [/FONT]

Just noticed my error in previous post. reference to 9600 is incorrect, should be 9200.

The 9200HD often took a few tries just to boot up. Channel changing was clunky. Sometimes "Scrambled Signal" would appear onscreen while watching a show, even though the picture and audio would still be there. I regard that box as a dinosaur. The company got smacked by Dish Network in court, making me wonder maybe if Panarex had had their priorities straight they could be considered a worthy player in the market today. I see them as a has been, hope they prove me wrong. If they sent me $400 right now I would forgive them for everything, haha. Got a few years out of the 9200HD, then it died. The tv set it was attached to is 15 years old and is still going strong. Why do we accept set top boxes with such ridiculously short lifespans?

FaT Air said:
Just noticed my error in previous post. reference to 9600 is incorrect, should be 9200.

While the 9500hdx does not include a terrestrial tuner, my experience has been that it is a very polished and trouble-free product compared to my two 9200hds.

Failure of a 9200hd can usually be attributed to power supply capacitors. I had one fail and the caps, while static testing good, were not so under the power supply switching frequency.

Since this thread is aimed, in part, for C-band users interested in fta, I will add the means of eliminating the drop in supplied lnb power level for vertical polarity (for use with lnbs requiring 15vdc) for the 9200hd as I did in my prior post for the 9500hdx. One only has to lift the collector of Q12 as shown in the below pic. 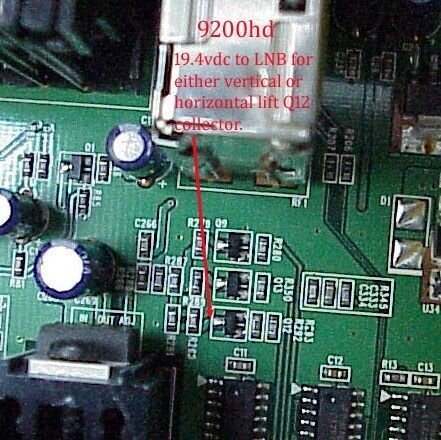