The wind here is 10 - 20mph and is gusting to about 35mph at times today, and I am having a little bit of signal loss to the point of pixelation and outright loss for a second or so at times.

I have watched the pole, and it doesn't seem to move at all, but the entire dish does sway with the wind, kind of like a shudder. Neither the polar mount, nor the actuator have any slop in them, but the frame of the dish does sway a little with a strong gust. We are talking about an old used Winegard 10' mesh here.

C-Band digital is not phased at all, but KU is being affected.

Is this something that is normal?
Do I just have to live with it?
Or can I do something about it besides buying a new BUD to fix it?

The Winegard Quadstar is a mesh antenna, which means that it is considerably less efficient than a solid reflector on Ku-band frequencies.

A 10-foot antenna has a much narrower beamwidth than a typical 30 to 36 inch solid offset dish (about 1/3 as wide), so must be pointed within a smaller "target"of sky.

This is compounded by the fact that Ku-band is 1/3 of the beamwidth wide, as compared to C-band.

Large mesh antennas can tolerate very little deflection on Ku-band because of the above physical facts. If you cannot stabilize the antenna, add a solid offset dish of at least 36 inches for Ku-band reception. It will perform better than your 10' antenna on Ku-band, and have less wind resistance plus wider beamwidth.
Result = more reliable reception at higher wind speeds.

I knew there was an answer, just didn't know what it was.

I doubt the old dish can be stabilized more than it is. The base, and out to the first ring (approx 18" from center) doesn't appear to move at all, but the frames, and outer mesh and rings do, and consequently the support arms for the feedhorn.

I'll just have to live with it for the winter. I have some other things I want to buy with money from birthday and Christmas. Maybe I can save ahead for srpingtime and then buy or find a smaller motorized solid dish, and set it up exclusively for KU then.

A smaller offset type dish will be a whole new ballgame for me, and an opportunity to learn even more.

My neighbor has a Primestar 35.5" x 26.5" offset eliptical dish in his yard that hasn't been used in about 5 years complete with lnb etc. He isn't home right now, but I am sure I can get it for free.

I have a couple of questions about it.

Will it work well for KU?
Do I need to get a different LNBF for it? or will the one that's on it be ok?
It appears to have two coax cables running to it. I assume that is for v and H?
Can this dish be motorized?

Do a Primestar search in the FTA forum.. Tons of info there..

You might want to check all the bolts holding the ribs and sections together. If they come loose, that will allow the antenna to deform causing loss of signal. Also if you got this dish used, it may be missing a few bolts. Have fun.

Thanks BKP, I have started checking out some of the threads on the Primestars.

and thanks to you Hermitman. I checked all the bolts on the 10 footer before I put it up, I think it is just the nature of the beast that after so many years of being up in the wind, the structure gets kinda loose.

You should find all the answers to your Primestar questions.. And lots of good reading in those threads..

yes h & v can be 22k or disqec together to one coax , most lnb's are .06 or .07 but are usually good for pointing. probably gain a few SQ points with a newer lnb

usually the problem is dealing with a heavy dish (on the motor). lots of reading in those threads explain how to make a new lighter mount for a motor. or from other threads show how to strap several lnb's so one dish can pick up several sats.

There is a huge amount of information about Primestar dishes in the general FTA area, and I am currently reading the thread you mentioned, but I think it will take a while.

I am going to take a drive in the morning and see if I can find an 84E which is the 40x30 you mentioned. I think the larger dish might give me a few more SQ points.

I wlll ask the owner tomorrow if I can have this one, and take it down, and keep it while I try to find a larger one. If I can't, I will use this one.

yes that a good plan, i bucket mounted without motor ( my first one), to get a feel for it. to tinker and play , plus it help me fet a feel for general direction and pointing. so any of them will work but bigger is usually better. i collected a total of 5 two rounds and three ovals. i will gave to do another test to verify but i think going from the oval to the round only gained 2% points , now every bit helps but what made a bigger jump was from the primestar lnb to the QPH-031

Here are a couple of pics: 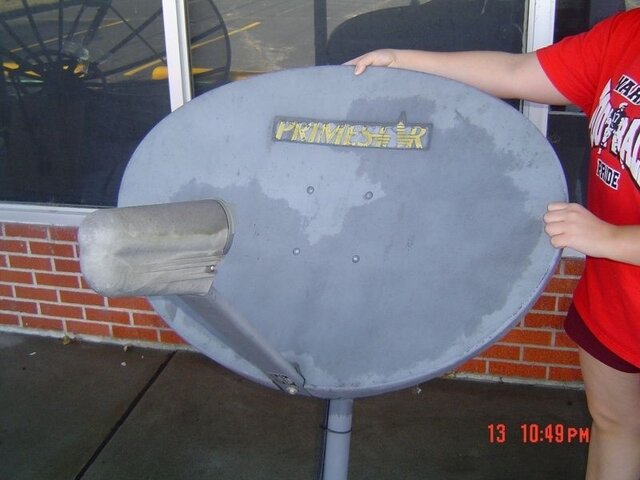 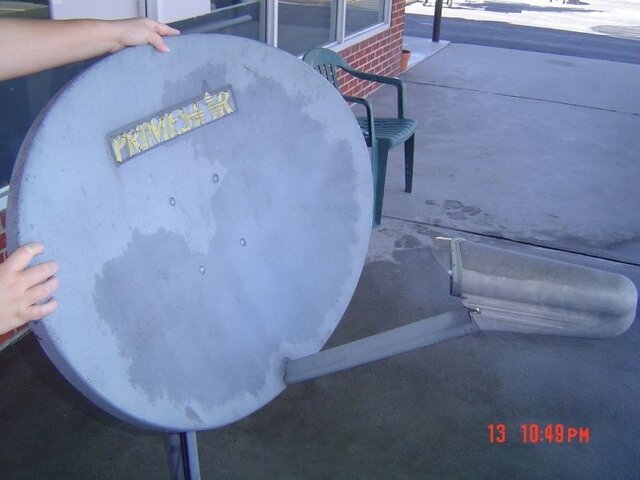 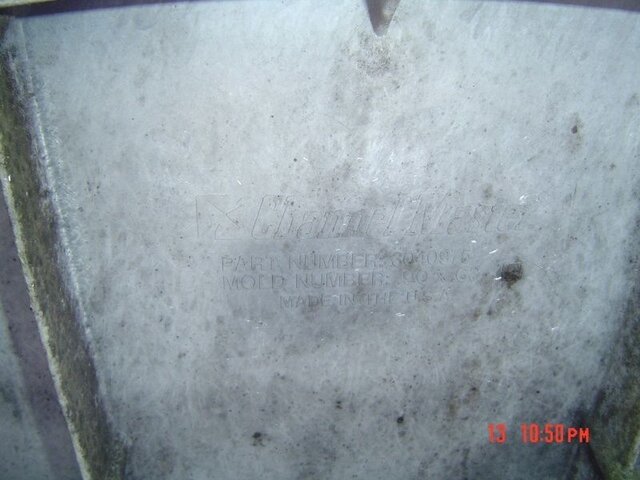 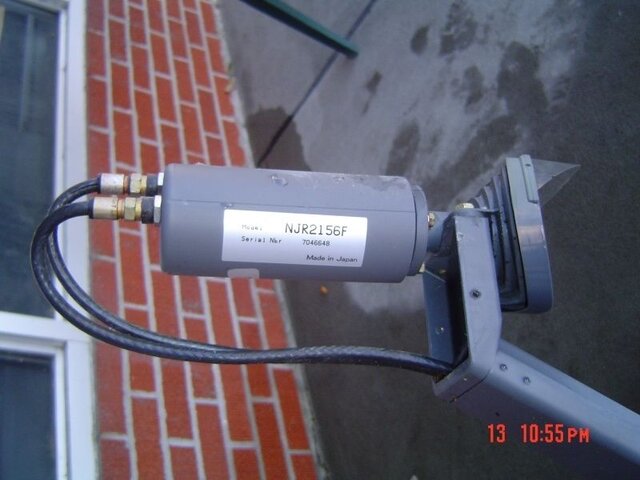 It seems to be in pretty good shape. Got part of the pole and all.

I picked up a 2nd dish after Church today, free of course.

Here are some pics. It is in great condition, and only been hanging about 3-4 years. 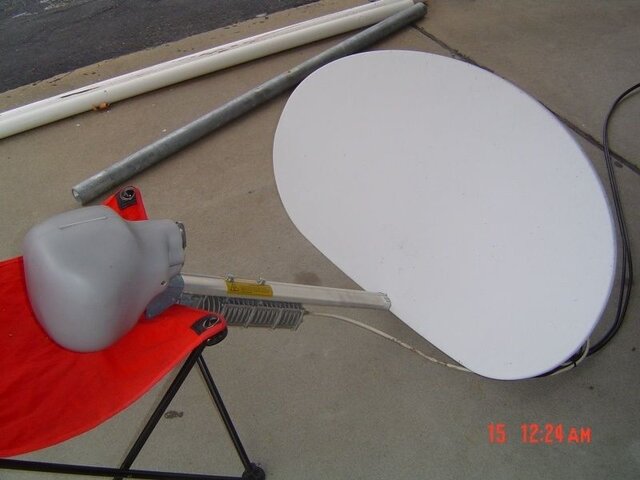 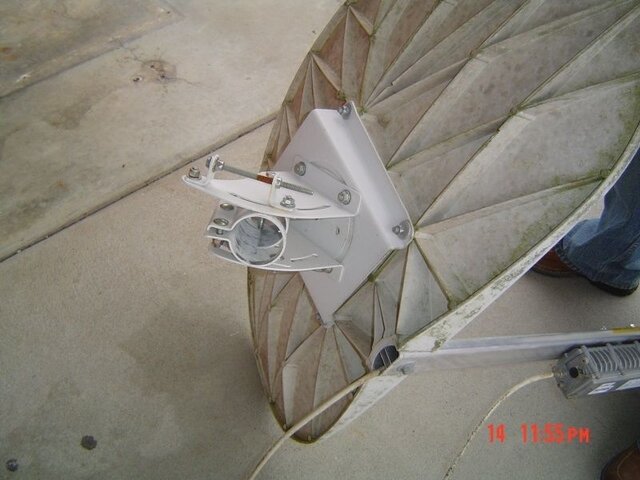 If nothing else, I might be able to use the mount or pieces of it for a bigger dish when I find it. 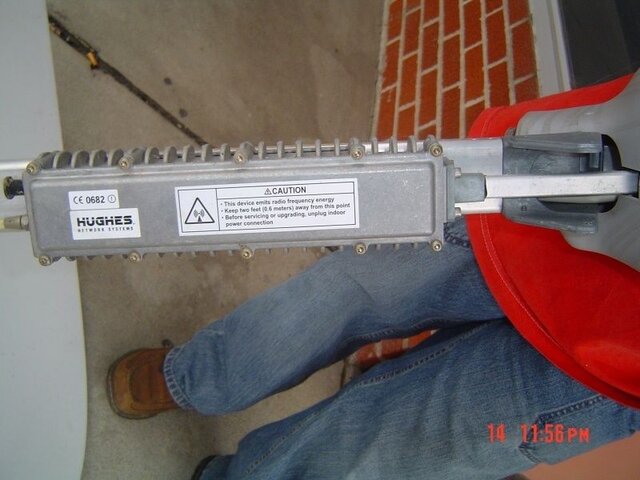 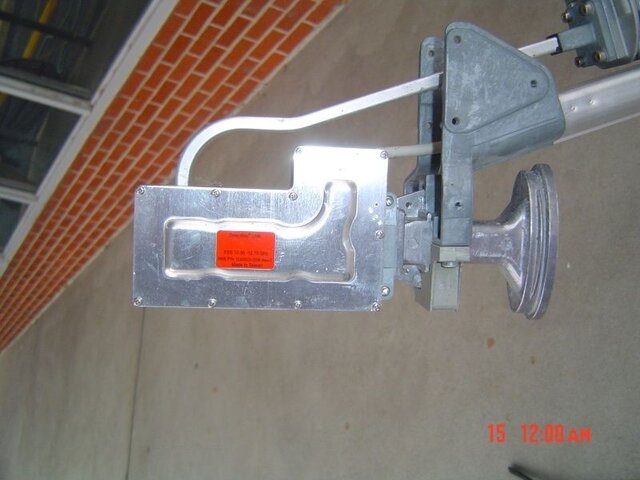 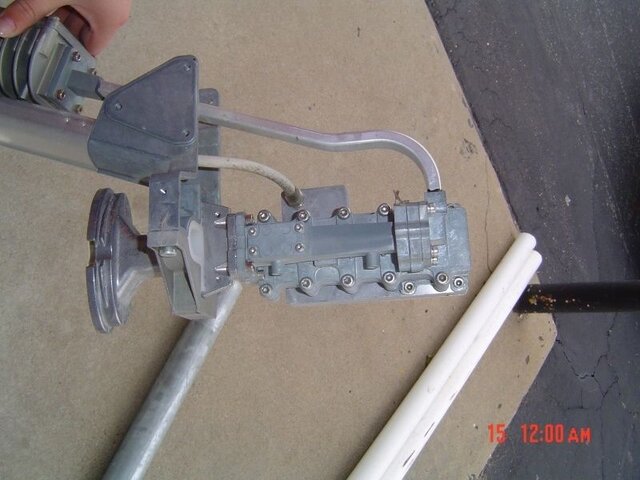 The lnb and feed horn are in good shape, just a little odd shaped where the clamp is.

Anyone have any experience with this kind of dish?

Is this lnb/feedhorn good for anything? Of any value to anyone?

The search continues. I want a Primestar 84e or bigger if I can find one.

Great score with both dishes...

I think you should play around with both dishes.. Also, I think you'll be surprised with the results you'll get..

I'm thinkin' Pete and maybe Iceberg has (or has had) a DirectPC dish..

I have a few DirecPC dish, they work GREAT for FTA and the great thing about the white ones is they can be inverted by skewing 180º and still be bang on the satellite!

I would replace the LNB and keep the feedhorn as its designed for the exact shape of the DirecPC dish!

Thanks BK and Pete!

I will certainly be trying one or both of these dishes.

I read something about your inverting a PS dish to pickup Hispasat at 30W. The nice adjustable mount was what really attracted me to this dish.

I didn't know whether the shorter DirecPC dish would decrease the signal, but perhaps the width outweighs the height.

I will be out looking tomorrow for the holy grail 40x30 or even the round/oval primestar.

I have read every post doing a search on primestar at the main fta forum back to about page 7 or 8, and am anxious to play.

Thanks for your comments, Fred

You may want to make sure your bolts are good and snug on your mesh dish between the panels.

If they are, then maybe drill more holes between the ribs and install stainless steel bolts nuts and washers to strengthen the dish.

This should solve your problem if your dish is in good shape otherwise.

I checked all the bolts when I first put it up about 3 months ago, and they were all tight.

I posted some pictures in another thread a while back, but the dish is old, and some hail damage etc. so I don't really want to invest a lot of time and effort trying to rehab this dish. It works great for C-Band, and it works great for KU when the wind isn't blowing 35 mph.

Also another major problem is that it is mounted on the side of my building with the East half readily avialable to work on from the roof, but the West half is out over a 22' drop and kind of hard to get to without taking it clear off the pole.

If I take it off the pole it will be to replace it with hopefully a better one. I am pretty good at scrounging. I think by Spring, I will be able to come up with another one to take it's place.

For now, I think I will try this separation and put the KU on a smaller dish. By doing this, I can also begin breaking my family into FTA because we have two dishes to watch.

Every thing always happens for a reason, and I think this is a good way to start the intro to them.

I do appreciate the suggestion, but after talking to Mike Kohl, I think the original design on this particular dish was flawed from the factory. I thought about trying to weld some stabilizers to it, but again trying to work on the West side almost prohibits that.

well the round primestar is heavy lol both of those are good scores. now another idea is to retro fit your current c-band mount to hold the primestar dish so when you move the c-band dish it moves the primestar also. a big dish with a mini dish. only downfal is you would have to watch what yourc-band is pointed to. this might ruin the family control but was just an idea.