Hi! I've heard that those dishes are good, but their feedarms and LNB holder do not point LNB to the right spot on the surface of antenna. So, I hot CM1,2m couple of days ago, installed laser-pointer instead of LNB and see that it points directly to the middle of the dish, however, proper aiming point should be about 140mm lower (approximately where I put green dot on attached picture).
Did somebody tried to check this on your dishes? Where is it that it 'points out' that the LNBF/feed should be where your green dot is ?? I think the should point to where your laser is pointed, the center of the dish.

FaT Air said:
I think the should point to where your laser is pointed, the center of the dish.
Click to expand...

I would agree with you if that was prime-focus dish, but on offset dishes LNB's aiming point is always lower than middle of the dish. I have no idea why it points where it points. That why I was asking whether somebody else checked this.

It is kind of a "wrong question" thing. You want to know if the LNBF is in the sweet spot of the dish. But seeing what the LNBF is pointing at doesn't confirm it's location in reference to the dish.

RimaNTSS said:
but on offset dishes LNB's aiming point is always lower than middle of the dish.
Click to expand...

Where did you learn this?? I'd like to know the authoritative 'source'.
I would think the manufacturer is 'In The Know' of where the LNBF should be pointed.
Have you tried loosening the LNBF clamp and aimed it lower?? Is there an increase in Q on weak transponders??
BTW, that's All I have in offset dishes, CM's 30 inch to 1.2 meter.
Further experimentation:
Clamp a camera into the holder. Take a picture, and I think you'll see the LNBF sees the dish as a perfect circle.
Think you'd want to aim at its center. That's the point illuminated by your laser.

I got this dish couple of days ago, so just washed it and started to explore.
Maybe attached picture can explain why LNB's aiming point should not be in the center of the dish. I draw green line , pretending it coming from satellite. Upper circle is representing how dish is visible form satellite. In the middle is dish' profile. And bottom oval is our dish, where point G "le point G" represents point our LNB should be aiming.
Test with camera instead of LNB sounds easy, but doubt it can be accomplish with unmistakable result.

Perhaps drawing is not perfect. But with that you are saying that LNB should be aiming right to the center of the offset dish?
And, BTW, drawing is just indicative and Focal point is located in focus of PFA from which offset is cut-off. You can see curved pink line in continuation of the offset dish.

I tried it with 2 lasers.

polgyver said:
I tried it with 2 lasers.
Click to expand...

Thanks for sharing those pictures. Construction looks sooo complicated. So, You've tried, and your conclusion is.....?

I am not sure I understand need for second laser. Could you explain process you went through?

The focal point will vary depending if the offset dish is round or oval.

jorgek said:
The focal point will vary depending if the offset dish is round or oval.
Click to expand...

Do not fully understand what you mean by that.
Of course, different dishes may have focal points located in different places.

But with that you are saying that LNB should be aiming right to the center of the offset dish?
Click to expand...

You can see curved pink line in continuation of the offset dish.
Click to expand...

(On all my CM dishes, the LNBF shadow [upper half] is seen shading the very lower lip when the sun is in the same position as the satellite it's aimed at. Should be happening again shortly - twice a year - sun outage seasons)

The radiation pattern of the LNBF is a circular cone. And if the satellite, and the LNBF, see a circle. The center (of a circle) is the center. That makes the angle of the cone equal on either side of the 'boresight' of the LNBF.
And I think that would be the flat plane of the reflector. (Spanning across,lip to lip)

If you can get better performance by aiming your LNBF lower, I may be wrong, But I don't think so.
FWIW: Parabola Calculator 2.0 Use the WIFI tab for offset dishes.
Reactions: jorgek

I made small drawing. Because of angle picture was taken opening angle of the dish is slightly smaller than it is in reality. LNB, in original holder points to the middle of the dish and this line does not illuminate dish evenly. If LNB was pointing to G spot, illumination would be better.
I know parabola Calculator 2.0, and if you calculate CM 1,2m in that program you will get distances from upper and lower points of the dish 1221mm and 721mm, so dish opening angle 79*. And after making bisector of this angle from focus, another bisector end will hot dish at point G.
Not all offset dishes are cut-offs from parabola starting cut from parabola's focal line. 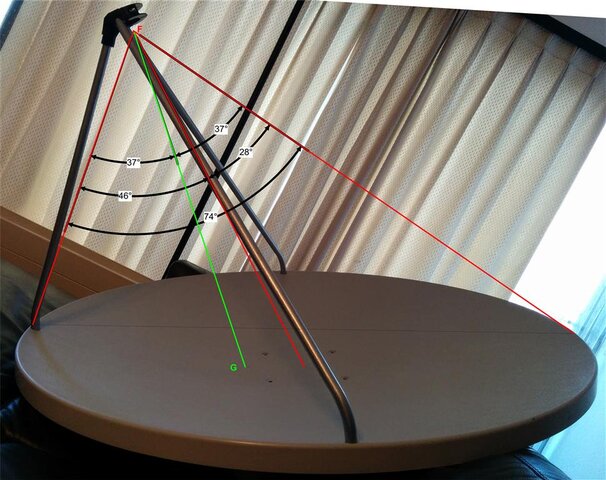 Got me thinking too. Since it is a round dish rather than oval, shouldn't the focal point be in the middle of the dish?

jorgek said:
Since it is a round dish rather than oval, shouldn't the focal point be in the middle of the dish?
Click to expand...

This is oval dish, has working area 1200mm x 1300mm. By saying "focal point" did you mean aiming point? No, it can not be in the middle of the dish!

OK, You're probably right. I'm beginning to think the center of the 'circle' seen by the feed is below the physical center of the dish.
BUT I don't think there will be much, if any, improvement in performance. Otherwise, I'm sure the manufacturer would have incorporated it into their design.

Where should the feedhorn be aimed? On a conventional dish it is obvious - - at the center. However, an offset feed is much closer to one edge, so that edge will be illuminated with much more energy than the opposite edge. I read an article (6) which did a lengthy analysis of the various strategies and concluded that small variations have little effect, so aiming at the center is close enough.
Click to expand...

Do you guys seriously believe Channel Master would design their dish and feed system wrong, and it would stay that way for almost 20 years without anybody else saying there's a problem?

It's designed that way for a reason, and that's just the way it is for whatever reasons of design they were concentrating on. It's pointed at the center, because that's were it works best for the particular offset angle.
Reactions: hank123 and pdiddy

primestar31 said:
Do you guys seriously believe Channel Master would design their dish and feed system wrong
Click to expand...

No. I think it's designed to the best performance possible.
Reactions: primestar31 and jorgek