I already have a motorized C/Ku Bud. But now I am going to start collecting C-Band dishes from my area before they all disappear. I already have a nice 10' mesh freebee waiting for me to remove. I'll be collecting these dishes to make a farm at some point in the future. But right now, I need to "git while the gittin's good" before it's too late.

I was wondering if any of you guys have ever used a cheap electric jack hammer like this...

Renting is $55 a day with a hundred dollar deposit. If ones like the one I linked are any good, that would appear to be the way to go. I plan on harvesting something like 6 to 8 of these BUDS, so $55 each time would be quite a bit more than buying one of these cheapies. If you bust up the concrete, that will save a lot of cash for new poles. Saving the existing poles would also eliminate the need for additional rigging and/or welding.

If any of you guys have any insight on how well these jack hammers work & hold up... I'd love to hear it.

Yikes, I used a mini sledgehammer last week and beat the concrete into submission to just below the ground, then I hacksawed the pole and buried the remains below grade. Power tools -- now that's a grand idea.
B

Before buying something that's difficult to return on Ebay go look for a Harbor Freight store nearby you - at least then you can exchange in person IF there's a problem.

I have a Bosch 11224 VSR rotohammer & it has been a solid performer for me. Bought it used on Ebay for $200 shipped with right angle head & a dozen bits. I asked a lot of questions before bidding.

brex2001 said:
Before buying something that's difficult to return on Ebay go look for a Harbor Freight store nearby you - at least then you can exchange in person IF there's a problem...
Click to expand...

We must think alike, I did that earlier today before starting this thread. The cheapest thing they had was 300 bucks (about $326 after tax). The biggest problem with the Fleabay units is that you can't tell what brand they are... and therefore you can't research them on the web.

Search rotary hammer drills on Ebay - there are a slew of Bosch, Makita & Hilti right now. Some in case with accessories.
Be sure to get one that takes the SDS bits - available at most any big box store.

IMHO you're in for a rough row to hoe if you think you're gonna get that post out of concrete that's about 24/36 inches deep and 24/36 inches in diameter! Not saying it can't be done, but my bet is that after the first one you'll be looking at ways to cut that post off and leave the rest in the concrete!

FYI, I've got a buzz box welder (225amp Miller) that I used to weld two short posts together when I installed that 7.5 foot SAMI last year. Got some short pieces from scrap and then welded short pieces together to make it as long as I needed it. It's been up now for a year and it's seen some pretty strong winds here and it's still rock solid as I haven't had a wrench on it but once since I initially tweaked it in and that was just to check to see if it was still peaked on elevation.

The older I get, the less I like strenuous activities, like digging holes and busting up concrete! ;-)

Lone Gunman said:
IMHO you're in for a rough row to hoe if you think you're gonna get that post out of concrete that's about 24/36 inches deep and 24/36 inches in diameter!...
Click to expand...

Well at least that won't be the case on this first dish. It's into a 4 foot by 4 foot square slab. And it's not just the pole, it also has what I'll call a "quad-pod". Meaning it has 4 additional legs around the pole that also go into the slab.

But you bring up a good point though. I probably will run into some that are "fence post" installed. If so, maybe the guy will have access to a tractor with a lift system. I do live in an area where that's pretty common. I'll just have to take them one at a time and see what's best in each situation.

Even a commercial air hammer would have struggled with breaking up a 4X4X4 slab. What you need for something like that is a hydraulic hammer attachment on an excavator.

A good electric jack hammer is something that's shaped so you have "T" handles, like a Bosch, but costs like $1200.00 to $1600.00 & weighs roughly 75 lbs (more or less). These work good with small slabs or sidewalks and stuff. Since I have one & use it on a regular bases, I know it gets heavy after a while, your arms start itching like crazy & is noisy. In addition, you need a power source. I have a 2,500 watt pure sine wave power inverter with dual deep cycle batteries mounted on my service truck & it takes everything that thing has to run the jack hammer, plus the truck needs to be running.
The tool you're looking at is still another step down. I had a similar DeWalt a couple years ago and it & vibrated more than pounded. I would be afraid if the concrete was too thick, the jack hammer might give out before you're done.

Maybe rent a similar one first to see how it holds up.

Just my penny's worth.

i use jackhammers on my job. they are loud, brutish dangerous devices. we use both air and electric.
i recommend not touching the darn things if you have any other option. i hate em
that being said, have fun!

Report back your experiences, and best of luck as a future farmer.

Myself I purchased a Makita HM1211B 20lb demolition hammer a couple years ago off EBay that was returned to Sears for 125.00 dollars, thing was never used. Like others they will beat you to dead as I've been using it to tear out part of my drive next to the house.
Your better off just buying new pipe and leaving the old pipe in the ground.

Lone Gunman said:
IMHO you're in for a rough row to hoe if you think you're gonna get that post out of concrete that's about 24/36 inches deep and 24/36 inches in diameter! Not saying it can't be done, but my bet is that after the first one you'll be looking at ways to cut that post off and leave the rest in the concrete!
Click to expand...

Man you got that right!!! I would not even want to try to break up that big block I put in the ground back in 1984. Not even with a BIG air powered unit.

Thanks for all the input!

I'll probably go ahead and get one. If nothing else, I'll need it during installation. I'm not lucky enough to live on deep pure dirt. Instead, I hit rock every time I try to dig a hole (31 sticks of dynamite & a bag of fertilizer just to get the septic tank in, lol).

Unfortunately, a fuel pump job on my car has trumped this project for a few days (first things first). But I'll post back to this thread how it works out when I get back to it.

At first I thought hitting concrete with a small handled hammer was futile. Then suddenly a big chunk broke free from the pole and the chase was on. In this case, though, the goal was only to get below grade. Pizza cake.

By the way, sawing off a pole filled with concrete presented no problems. Concrete doesn't add any strength once the iron skin has been breached -- the pole was a pushover.

Concreted BUDs, you're on notice. Resistance is futile -- especially if your pursuer has power tools. 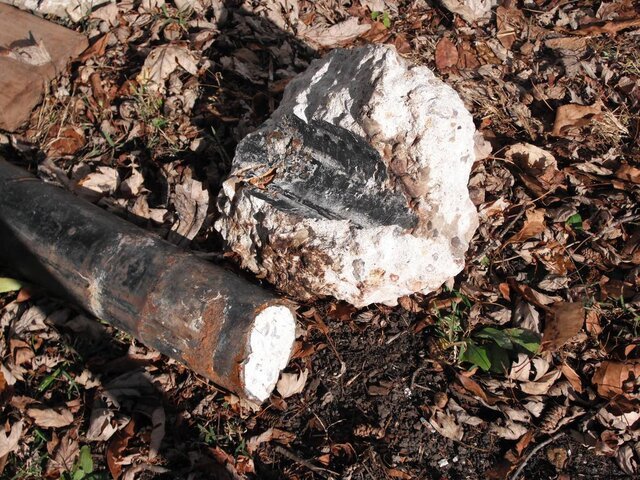 When I went to get my free Birdview I didn't use a jackhammer. I cut it off flush with the ground with a Skilsaw and a metal cutting blade. You are spending a lot on a jackhammer in return you are getting a couple of feet of steel pole here and there. I don't think it's worth it. Your local scrapyard probably has poles in abundance for cheap.

I hear ya Lone Cloud. But like I said, I'm gonna need one anyway for re-installation. If you ever tried to dig a hole on my property, you'd know exactly what I mean.

Plus, on this first 10 footer, the mounting pole isn't the only part that goes into the slab. I wish I had a digital picture of it so that I could post it for everyone to see. It's a really interesting design and I'd like to save it. The extra supports are square tubular steel and look like they would do a very good job against the wind.

I understand that I may wish I had taken a different direction by the time I'm done with this first one. But I know the guy, and he kinda wants the slab gone. So that's one more reason.

But even if I only use the jack hammer for this one un-install... I'll use it for sure on every re-install.

Which "jack hammer" did you settle on?
Don't forget to bring along the 12lb sledge, pike & picks.

brex2001 said:
Which "jack hammer" did you settle on?
Don't forget to bring along the 12lb sledge, pike & picks.
Click to expand...

A little C4 wouldn't hurt either.

I really haven't done enough research yet to know which one. I'm considering the one I linked in the OP. But until I figure out what type of replacement bits/chisels it uses... I can't really say. But that price tag would be pretty "low risk".