I am trying to get DTV installed again after several years of not having it. I live in a very rural area with many tall trees. I know that I can get an excellent SD signal here, 90-100 in signal strength, but the installer was out yesterday and refused to install it for HD boxes. He would not even try although I told him it was a good location. I asked him to let me install it and he refused saying he was responsible for the quality. I have installed dishes before and had no problem. I recently helped a friend with his and it was still easy. Ten years ago they used to send the systems to you and then either you installed it yourself or they sent a tech out, your choice.

His objection was that the open space between the trees was not large enough for HD. So my question is how much more room do I need, as in what is the angle for HD compared to SD? The direction here is 225 degrees & elevation 39 degrees if that matters. But I do not know what the width of the opening had to be. I am thinking that by putting the dish on the back side of the house instead of the front yard and removing enough trees I might be able to get clearance for the HD service.

They are supposed to come out again next week to try to install SD boxes but I would much rather get HD ones since the recent boxes a friend of mine upgraded to at DTV's request do not have as many features as the old ones did, such as a 3 day programing guide instead of two weeks which are a big dea to me. Also I plan to get an HD TV soon.

Anyway I would appreciate any help you might give. I do not have a satellite sighter but can approximate with the equipment I have.

The satellites carrying the hd channels flank the 101 satellite so you don't need a real big viewing angle. The problem may be the 119 satellite. If your local sd channels are on 119, you have to get it in order for Directv to do the install. That doesn't mean a local independent won't do it, they will if they can. There are dishes that don't need the 119 satellite to work. You won't get sd locals, but who cares really? What is your zip code so we will know if you need to get the 119 satellite?

If you get your locals from Washington DC, then you don't need to get 119. If you have a smartphone and are willing to pay $20 for the dishpointer app, it will tell you very accurately whether or not you have a good line of sight.
G

My zip is 25411. I know that I can get SD with no problem. Or do you mean I need a wider angle to receive both satellites?

Yes the locals come from DC. No smart phone just a land line. Too rural to get cell reliable service here. I know I get SD service and he had no problem coming back to install that just not the HD service boxes. He suggested I cut down a tree that can't reasonably be cut down. That is why I thought about moving the dish to the back side of the house.
Jerry

The compass heading for the 101 sat in your area is about 224 degrees. Can you post a picture of that from behind where you want the dish to go?

Jerry,
If the D* tech refuses again, I would look to see if there is any local installers.

D* does have an expected window that they try to have in order to be sure of having the best signal for the duration of use.
G

Here is a shot looking 224-225 degrees. The signal comes in when the satellite is positioned toward the v just to the left of the righthand trees. Do I have enough room for the HD signal? 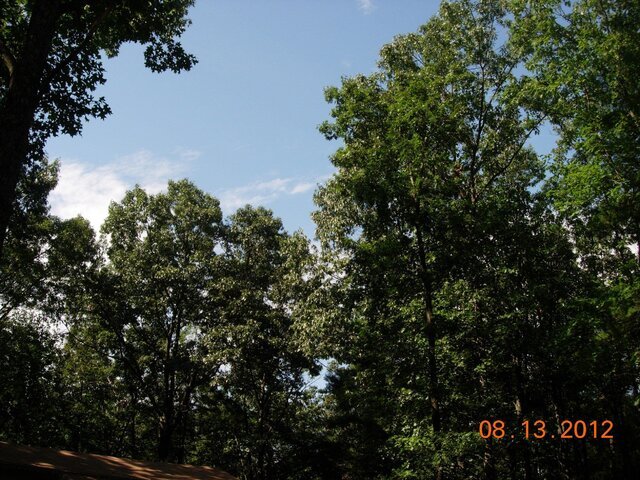 Directv requires us to have a 10 degree window on all sides so that's prolly why the tech refused. As for the picture, I prolly wouldn't touch it either but pictures don't always tell the complete truth of a clearing IMO

GraphicFunn said:
Here is a shot looking 224-225 degrees. The signal comes in when the satellite is positioned toward the v just to the left of the righthand trees. Do I have enough room for the HD signal?
Click to expand...

From your photo, your situation is not promising in the long term. DIRECTV's rules that they give to installers are pretty persnickety about the long-term viability so that may also be a concern.

It does look rather close. Without the satellite positions overlaid, it's hard to say for sure. Since your local sd channels are from 101, you only need 99, 101, and 103. A local independent installer might do it for you.
G

Seems like they would at least try considering I had 90-98 sig strength on most of the trans from this location before. If I have to start cutting down trees I might be better off to go with a different provider since they bundle all the services in my area. The crazy things we do just to get TV. Oh well, thanks for all the information. I appreciate it.

GraphicFunn said:
Seems like they would at least try considering I had 90-98 sig strength on most of the trans from this location before. If I have to start cutting down trees I might be better off to go with a different provider since they bundle all the services in my area. The crazy things we do just to get TV. Oh well, thanks for all the information. I appreciate it.

Here's the thing about trying it. Installers don't make a dime until that work order is closed. If they spent 2 hours battling them trees just to walk away and say "well, we tried" isn't going to make them a dime where as they could no line of sight your job go to the next one and make $100 in the 2 hours they spent at your house. It boils down to, would you work for free? I know I wouldn't (yes this sounds bad but it's the reality of the world these days) maybe you can get lucky and see if the installer will come back and try for some cash regardless if he can make it work or not. If we put something in like that in our market we would hear nothing but backlash from management.

Did you see my suggestion about contacting a local independent installer?

raoul5788 said:
Did you see my suggestion about contacting a local independent installer?
Click to expand...

Relaxing in a lounge chair poolside in sunny Cocon

GraphicFunn said:
I am thinking that by putting the dish on the back side of the house instead of the front yard and removing enough trees I might be able to get clearance for the HD service.
Click to expand...

BINGO! By moving the dish to the farther side of the house, your tree clearance issues should go away. From your picture, I think you original location may work, but moving it to the opposite side of the house should be just the ticket.

I too recommend a local installer.

Yes, I saw the note about getting a local installer but I am not sure exactly how that is different. The guy who came out is local but I think they only work for Mastek which provides the installs for DTV here. Would an independent local installer work with DTV or would I have to buy the boxes and pay him for installing it? If so I feel like I would have to pay someone to do something I can easily do myself if they would just let me. How would I find a local DTV installer, there is nothing except Directv listed in the phone book?

I was hoping the mounting tower I have in the front yard would work as it will take me a little while to cut down enough trees, think very tall trees, out back to get a good clearance there too. At least there are on the downside of the slope that will help there. Winter is coming and there are just way too many things to get done

Relaxing in a lounge chair poolside in sunny Cocon

Look towards the bottom of the page, and input your zip code and search radius.

A local retailer will be more motivated to find you a soulution than a Mastek Subcontractor.
G

Thanks, the closest retailer is 30 some miles away. Not sure that is good but I will try calling them and see what the details are.
Jerry