Well It's that time of year

Sunday racing again, has everybody herd about the new rule we won't know who won the races until 2 hours after the race is over[post race inspection] 1st and 2nd place and a random other car. If you fail you lose. Can somebody make this sticky please
Last edited: Feb 5, 2019
Reactions: charlesrshell
Register Today to see less ads! It's Free!

So glad they will be invaliding wins on cars with illegal modifications. Monetary fines, crew chief suspensions and the docking of points haven't seemed to work as a deterrent, maybe this will.

There's been a lot to like in what NASCAR announced in yesterdays rules, as well as the outlook toward the future. Not a big surprise, but finally exiling Brian the Buffoon is going to prove a big moment in getting this ship headed back the right direction.

I agree with the new rules, but I have to admit some apprehension in how to view the end of races now. How excited do you get about the finish of a race, knowing in ~two hours it may get stripped. My team was clearly an offender last year, so it probably puts me on higher alert. Pushing the edge has always been a part of NASCAR, but so has judgement calls by NASCAR. You wonder how far NASCAR will let things get pushed before they apply this new policy and strip a win from someone. Hopefully the newer inspection policies will do better at catching things before they get to the race to start with.

Speaking of inspections...some interesting new penalties for failing inspections, too:

NASCAR announced Monday that during a three-day race weekend, a car that fails prerace inspection twice will start at the rear of the field, have a crew member ejected and lose 15 minutes of practice at the next event.

Should a car fail inspection before the race three times, the team also will have to serve a pass-through penalty at the start of the race and lose an additional 15 minutes of practice the next weekend.

Should a car fail inspection four times before the race, it will be classified an L1 penalty. Minimum penalty options would be a reduction of 10-40 owner and driver points, and/or suspension of a crew chief or team member for one to three races and/or a fine between $25,000 – $75,000.
Click to expand...

All that, plus having dedicated officials in each series garage 24/7 through the whole weekend.
Reactions: Elsguy

Auspicious start to 2019 for me. Missed the start of Cup practice for the Clash. Just turned on the TV to catch up, flip over to practice, and literally the first image I see pop up when the channel loads is the 4 car roof cam showing Kevin walking around his freshly wrecked car. Awesome way to kick things off.
Reactions: charlesrshell

They ought to rename the Clash to the Crash lol.
Reactions: charlesrshell and DWS44


Partysox said:
They ought to rename the Clash to the "Annual Jimmie Johnson Crash" lol.
Click to expand...

I am not looking as forward to the 500 as I was before this race if this race is any indication{BORING RACE except Johnson's screwup].

Yeah...I'm with you on that.
Reactions: charlesrshell
K

Is it really any different than 2nd place hooking/wrecking 1st place on last lap corner 4 to take the win...
As so many other races end.

Happy with duel one...not so much duel two...but good lord this package is booooring.

Other than waiting to see who'll be the next victim of the 48's personal wreckfest, looks like Sunday's gonna be a whole lotta single file procession.
Reactions: Elsguy

On a happier note, there's a company called Direct Driver Apparel who has been making some retro NASCAR shirts and such...and just found this new item on their website: 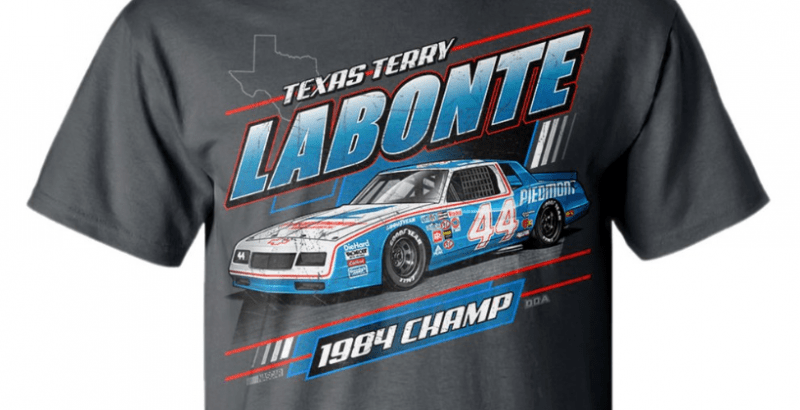 That's the car that started me on the path to growing up a Labonte fan, as my Dad worked for Piedmont Airlines at the time. I was eight when he won that championship, and although we always rooted as a family for whoever drove for Piedmont before and after that, I always stuck with Terry for bringing Piedmont a championship. That's where the 44 in my screen name comes from, too.

total waste of an evening
K

MARKETING...
What if we package
'Qualifying'
As multiple races?

Some sad news in the NASCAR community...noted NASCAR artist Sam Bass has passed away.


Many of the famous paint schemes on the cars over the last 25+ years were designed by him. I met him once, briefly, at a big race weekend event in Bristol one year...he seemed to be a very nice and down to earth person.

Well it was a lot better race than I thought it would be except for being a wreck fest and crash Johnson wasn't the problem, a little bit of everybody else was though. I was encouraged the Chevy's looked kind of sporty lets see what happens next week, my DVR run out and I missed the final 2 laps had to go to Nascar.com to find out the winner.
Reactions: DWS44

Partysox said:
Well it was a lot better race than I thought it would be except for being a wreck fest and crash Johnson wasn't the problem, a little bit of everybody else was though. I was encouraged the Chevy's looked kind of sporty lets see what happens next week, my DVR run out and I missed the final 2 laps had to go to Nascar.com to find out the winner.
Click to expand...

I guess next week in Atlanta (I think it is) they change the rules again ... no restrictor plates, but some other type of way to restrict air flow I think.

Jimbo said:
no restrictor plates, but some other type of way to restrict air flow I think
Click to expand...

Yep..."tapered spacers", and also a bunch of other aero hijinks, too. Slightly modified version of the package they ran at the All-Star race last season, trying to manufacture pack racing at all the intermediate and larger tracks.

I know this race didn't have the full new package since they didn't run the new aero ducts, but I can't say that I was overwhelmed by the results of the first outing on the package. Seemed like it kept them bunched up for a little longer after restarts, but after that, they were mostly spaced out about like usual. The lack of throttle response from the reduced horsepower and spacer seemed to cause more issues. Keeping momentum up and/or losing momentum if they have to let off at the wrong time is apparently going to be a big by-product of this new package.
Register Today to see less ads! It's Free!
Previous Next