I know this has been asked a few times in the past. I myself have also wondered how well one would perform.
So this evening I had a little time and after some thought, decided to try it out. It was getting late so I didn't
get to fully test it, but here is what I done so far. Look at the pictures to see what I done. This was all done
very quick, so it could look a little better, but it works so far.

First off I took off the TRIA that was on the dish. (BTW the dish was already mounted pointed at 111.1 for WB)
Then I took one of my chaparral Universal LNBF's and using my meter outside held the LNB in my hand holding
very still to see if it would work at all. When I got a decent signal I decided to fabricate some sort of mount.
I also noted that the holes at the end of the arms were just about right except it needed to be in the middle.

I took a short piece of copper pipe and beat it flat on my anvil. I then measured and drilled some holes and
mounted it up. I decided to point at SES-1 @ 101W. I then fired up my meter again and slowly bent the mount different
ways until I found the focal point. I then locked down the LNB and did some fine adjustments to the dish until I had
a surprisingly, very good signal.

I then hooked this up to and unused port on my 8x1 switch and went in the house. I did the needed changes in the
antenna set-up menu and there is was, 12060 H 26,700 was a couple points better on the scale then on the other dish.

So I deleted all of the transponders in the list for 101 Ku and did a rescan of that bird and it scanned it 10 transponders and 96 channels.
Everything that I had before and all signals were very high. So there you go. I'll add later if I can think of anything else.

It got dark on me so I quit there to go eat supper. Tomorrow if it isn't raining I will point it at a few more birds and see what
kind of signals I get. 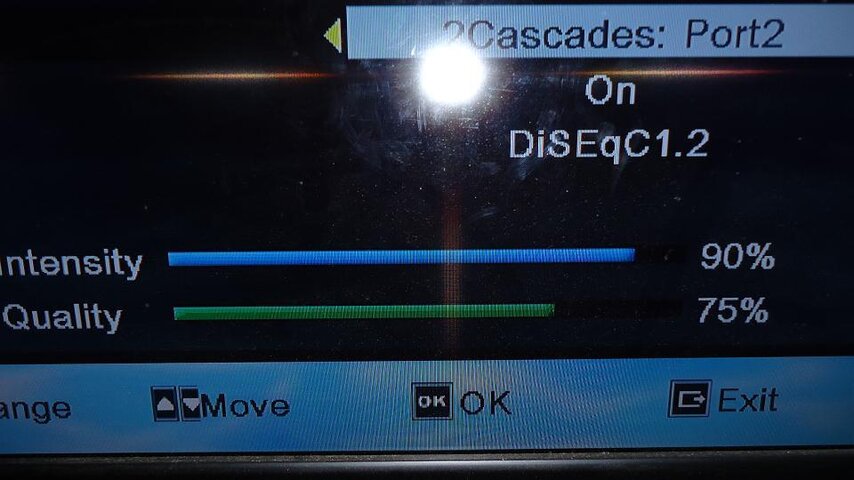 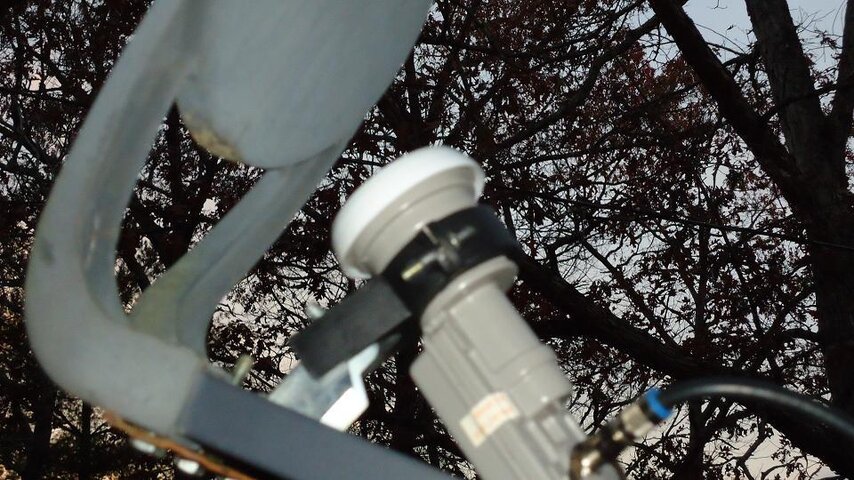 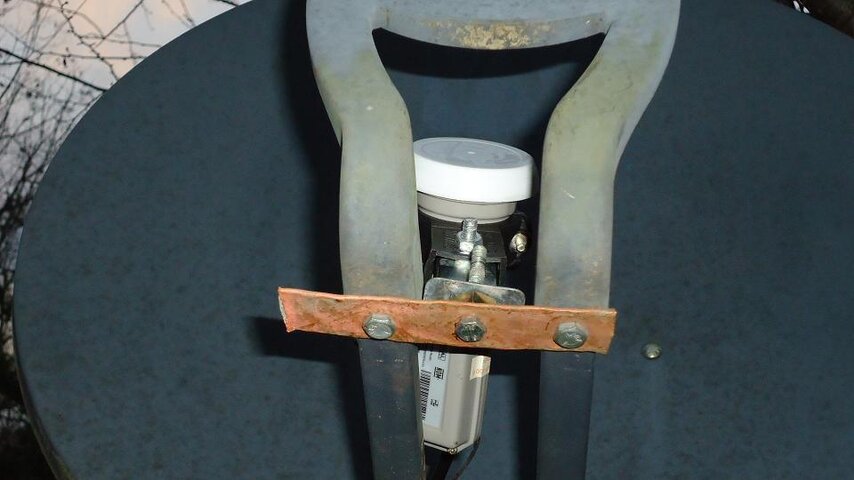 Yeah I tried it both ways, and yes I got a better signal using the sub-reflector. I have been wanting to try this for awhile. Today I was sitting around thinking and decided to do it. I will do more experiments with it over the next few days. It does way better than I thought it would.

Yeah I was trying to guess at that by holding out in front by hand and being real still but I know it was not the best test. I did have the sub off. I am going take it off again but this time solidly mount the LNBF and try that so that I feel I will have a true comparison.

Recently picked up a couple of these dishes...one for free the other for $15. Good tinker material. Now that winter's coming
will have time to play and see what comes up if anything. If you see this ke4est, what LNB is that in your pictures? Fun stuff eh?

My notes say the WildBlue dish is 26" wide by 28" tall.
We've seen members getting some of the stronger signals on dishes down to 18-20".
Small dishes are succeptable to adjacent-bird interference, even if the direct signal is strong.
That's why I don't encourage them in Ku nor C-band.
Especially for newbies.
But it is amazing what these dishes can do in the hands of an experienced FTAer!

Back in the days when conduit clamps were first popularized in the forum, I posted some pictures of a too-small dish outfitted with an Invacom.
DirecTV Phase III 20.5" w by 18.5" h .

macksat said:
Recently picked up a couple of these dishes...one for free the other for $15. Good tinker material. Now that winter's coming
will have time to play and see what comes up if anything. If you see this ke4est, what LNB is that in your pictures? Fun stuff eh?
Click to expand...

That LNBF is a Chaparral Universal. I am not even sure were to get them anymore....ebay maybe???? Any linear LNBF should work though as it is almost round.

Is there a definite advantage to a sub reflector on Ku? (or just the ease of mounting multiple LNB's on this one) I saw my first commercial version of that recently and have been wanting to ask! Must be they're popular for one of the pay services now? It was for multiple satellites and has me really intrigued! Not sure if I'll buy one, but it looks like fun.

Radio, that's a toroidal dish.
They come in two sizes: t-55, t-90
The little one was okay for high powered DBS satellites
The T-90 was popularized by a number of forum members.
Iceberg published some excellent set up info on his, for instance.
They don't seem so popular today.
Maybe due to high price, difficult installation , cabling & switching required, and just average performance.

Thanks for the heads up! Sounds like the 'fun" may be traded off for poor performance and hours of setup.
I'll avoid getting one!
Nice to be able to exchange information here, as always!
Thanks again!

Three t-90 dishes and a BirdView on Pendragon's roof.
http://www.satelliteguys.us/attachment.php?attachmentid=69621&d=1315791836
If you zoom in, you can see all the LNBFs on the bottom of each dish.

They do look intriguing, don't they!
Well, if cheap enough, I'll see if I can grab one for "play"

ke4est said:
That LNBF is a Chaparral Universal. I am not even sure were to get them anymore....ebay maybe???? Any linear LNBF should work though as it is almost round.
Click to expand...

Thanks ke4est.
I have a few LNBF's laying around to play with.
I'm assuming Lat/Long/Skew settings should be same as for any FTA offset dish....?

I'm assuming Lat/Long/Skew settings should be same as for any FTA offset dish....?
Click to expand...

I would expect the mount has fine adjustments like the newer DirecTV dishes.
That's necessary to peak on a Ka (as opposed to Ku) satellite.
Probably has skew, too.


Of course you could go crazy.
Throw away the heavy mount and put that little dish on a motor!

Nice work! should be a lot of these dishes going unused as they move customers to Exede (which is AWESOME! btw)
H

So this dish picks up most of the satellites,I just picked one .

It picks up one bird at a time best.