Just saw a scroll on the C-band pbs feed asking for viewers on satellite dishes to call 800-399-0424 to be counted.

Has this been seen and discussed yet? Is this part of PBS 's consideration to abandon the C and ku signals?
Reactions: olliec420 and k.r.

He said C band PBS, so it must be the one on 103 W.
Reactions: Horsepower

Call the number. It's an automated four question survey about how and where you saw the message. At home. On my big satellite dish. at my zip code.
C

There is no way they are just providing the C-Band feed for the handful of us left with C-band dishes.

Just tuned it in. Likely a good idea to call, especially if you are in an area not covered by terrestrial PBS stations. Gives them an idea how many watch from these areas, but I would also presume they are looking justification to discontinue that particular service.
In my case I have a fixed Ku dish on 125w so I rarely use the C-band feed on 103. If it wasn't for 125w though I would certainly be on 103 more often. I PVR several shows from PBS. Their local terrestrial station(s) here are just on the fringe even with a decent antenna setup so OTA isn't really an option here..
Reactions: comfortably_numb

chadg2 said:
There is no way they are just providing the C-Band feed for the handful of us left with C-band dishes.
Click to expand...

An older budget request from CPB references 'relief' from statutory requirements for the satellite feed to users of large dishes. 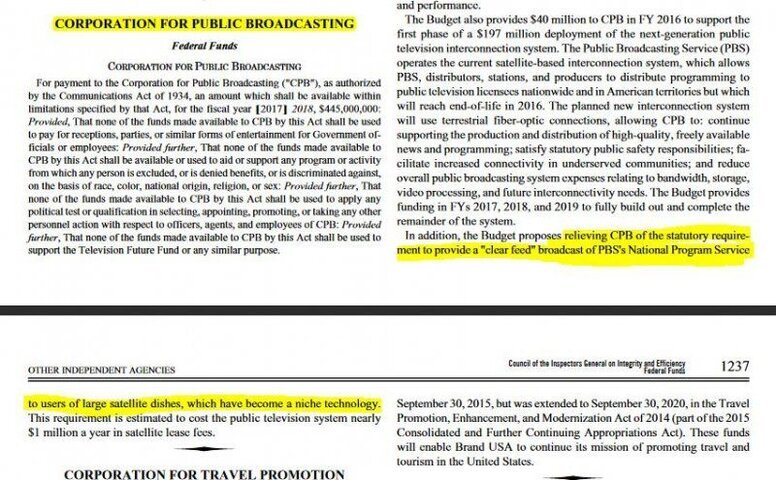 Also, recall this older discussion on SatGuys: Cost of a transponder
Reactions: kofi123

Made the call just now!

I don't watch PBS that much but I responded to the survey anyway. Need as much C-Band programming as possible.

I just tuned in to PBS at 103.°W C-Band, and I don't see the information as described by the OP. I will call anyway.

I made the call earlier this morning. The information was displayed after the show I was watching ended, before the next one started. Everyone should respond.

It's evident that both the Corporation for Public Broadcasting and Public Broadcasting Service want to eliminate the satellite distribution system since they're installing their IP-based fiber system. If they get their way, the full time feeds from 125W and 103W that are freely receivable by the Public (notice the word "Public" in both the organization names) will be gone.

A lot more people watch the Ku band feeds on 125W than the C-band feeds on 103W. If they must eliminate the C-band feeds (and get approval to do so), they should at least be required to make a feed on one Ku transponder (preferably the channels on AMC 21 TP 12180 V) available to the Public. But that probably won't happen, they'll just shut all of it down.

I just made the call.....this should be posted in other Forums.
Z

gpflepsen said:
Just saw a scroll on the C-band pbs feed asking for viewers on satellite dishes to call 800-399-0424 to be counted.

Has this been seen and discussed yet? Is this part of PBS 's consideration to abandon the C and ku signals?
Click to expand...

I just called ! Thank You for posting this!

I did the survey to

I just called. Sure hope the feed stays up.

Does this affect the PBS feeds on 87°W Ku-band also?