Would you please help me on a project by providing an exact measurement of the inside diameter of your C-band or combined C/KU feedhorn?

I am manufacturing a new laser alignment tool for installing and centering a feedhorn on a satellite dish. Want to make sure that it will be an exact fit on as many types and models of C and combined C/KU band feedhorns as possible. While I have about a dozen feedhorns and LNBFs, I know that there are many more that I do not have access to. This is where I need your help.

Installing a feedhorn or LNBF so it is aimed to the exact center of the dish is critical to the optimization of a satellite system. Some of us are fortunate to own alignment tools from the early years of BUD installation, while others have used torpedo laser levels to estimate this alignment. My goal for this project is to produce an inexpensive and robust alignment tool that we can carry around in our tool kit for those occasional feedhorn installs. Visualize a hockey puck shape with a lip and a precisely centered laser pointer.

Thanks for your assistance!
Reactions: k.r., PopcornNMore, pdiddy and 1 other person

I have Geosat C2s on my 2 in-service BUDs, (and a couple of Chap co-rotors on the shelf) I bet you already have measurements for those.

Here is the dimensions for a Chaparral corotor C/Ku feed
Front entrance of feed throat is 2.430"
2 inch`s back is 2.410" = .28648 deg per side 0.17'11"
The 2" dim was taken just using calipers on the outside diameter then subtracting the wall thickness.I have telescoping gages at work and can bring home to check but we are dealing with a casting so calipers should be close enough.

This is a great idea Titanium and have designed my own and I will share with you in an email.The biggest obstacle I see is a laser made that will work for various feeds and it being self centered..Obviously different feeds will have varying taper and diameter.
Last edited: Jan 11, 2014

Excellent idea, Brian. I have a Chaparral dual ortho, a Chaparral single and a National ADL single feed that I can measure for you. It's pouring rain and supposed to rain for the next few days, but when the rain stops I'll get outside and measure them.

I will buy one

Great product idea! Would have saved me a bunch of aggravation at my feeble attempt.

DMX741 Entrance ID: 63-64mm = same 2"(50mm) back
Taper begins approx 80 mm from entrance.
You would think the LNB's would be the same entrance ID following waveguide formulas for 3.95 Ghz. 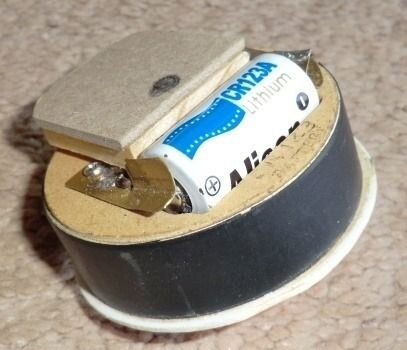 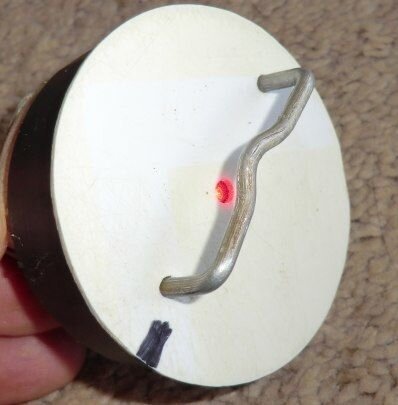 The guides for the dielectric plate start .950 from the entrance and they are raised about .020.

Have you considered using something mounted to the scaler ring instead of the inside of the LNBF?

Mounting the laser unit on the scalar would not provide the critical feedhorn alignment. The laser unit would likely be provided with an adapter sleeve so it could be also secured in the scalar mount.

The scalar would first be set for correct positioning. Once the scalar is positioned and secured the feedhorn would be installed into the scalar and the laser then placed inside the feedhorn for centering.

The laser will be centered and factory calibrated in the insert. Also will feature beam adjustment screws to allow an advanced user to recalibrate (or mess-up) the X and Y axis.

Here is the spec sheet on my feed:

After checking drawing, does not show wall thickness..

Nice drawing, but unfortunately cannot determine the feedhorn ID measurements from it. If you have a chance, please check for the feedhorn inside diameter and depth measurements. Be nice to document as this is a model not often spotted in the wild...

Here is the spec sheet on my feed:

After checking drawing, does not show wall thickness..
Click to expand...

I've got a couple of ideas... I'll throw them out now while you're still considering the design of your product...

An idea: Maybe you could include some adapter "rings" that screw on/attach to the outside of the "puck", so the user could have an exact fit for the system being aligned. Certain rings could be tapered if required; perhaps also labelled with the size, or an easy way to identify each of them... or include a chart so the user can see what size they should use for the particular LNB/LNBF/feedhorn they are aligning. Maybe the rings could be sold together or separate from the puck (since some people would only want it for a few LNBFs, others might want it to do installs and be able to put it on anything).

Another idea: I don't know if there would be a market for it, but if the back-side of the puck had an appropriate hole/adapter, along with some "inner rings" to adjust for various LNBFs, the same puck could be used to put over the front of KU LNBFs for smaller dishes. It might then help with alignment of some KU dishes too.

Hmmm, that second idea might not work so well with offset dishes, at least not without some supporting documentation. Heck, you could include a bunch of cheap half inch mirrors with it, to tape to an offset dish for alignment support. With documentation of common offset dish types and their "center point" measurements where the alignment tool should point, it might be useful for KU LNBFs / small dish setups... dunno, just spit-balling here.

Oh, and if you are going to allow x-axis / y-axis adjustments, it would be awesome if there was a simple tool that you could attach to the puck to make sure that the system is aligned. I'm thinking of something like a yard stick that has the puck screw into on one end, and a "target" on the other end. All very precise and accurate, of course!

None of my feeds have any model # on them that I could find, but I'll try to find the time to add some pictures later.

Could you maybe make this slip over the outside of the feed the way the blue plastic covers do? The OD on all my feeds are slightly different in size but the plastic covers I have all interchange and stay on good.
Last edited: Jan 13, 2014

I have to agree with A raine. I have a few chaparral feedhorns here, and some of them have a raised areas on the inside of the feedhorn. Also The C band probe on all versions of the corotor (not wideband), extends almost to the end of the feedhorn. See attached pic. 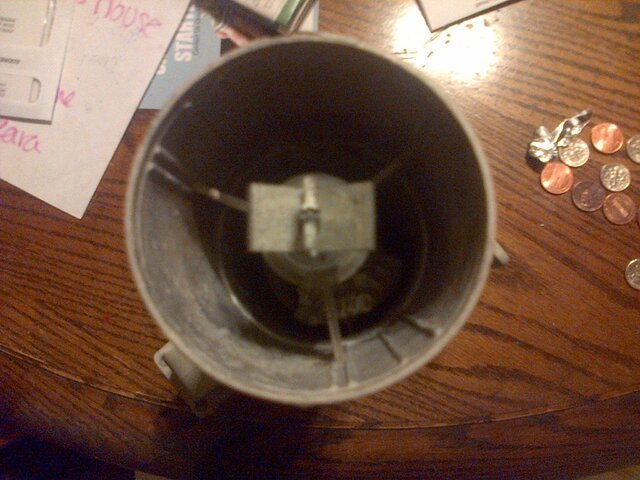 I have a couple of Chaparral feeds and they all seem to fit the blue plastic cover quite nicely. It is approx 2 5/8 inches in diameter and goes on 7/8 of an inch. They position quite accurately for locating the boresight of the LNB and hold tightly to the outside of the LNB with 8 plastic molded nibs that are approx .010 in height. A 3 inch hose clamp could be used to absolutely prevent any movement, but would not be needed if the green laser source and optics are lightweight. The green lasers can be seen in the daytime and can be left on for long periods of time if they are designed for that service. They probably have to be individually aimed/calibrated, but that probably could be done by the end user by rotating the device on a test mandrel. You should be able to find the center of the dish within 0.1 inch with a little care. Get a photo of the end of a co-rotor that is a little more in focus and you can see the complexity of making a tool to fit inside the feedhorn.

mmewrench said:
I have to agree with A raine. I have a few chaparral feedhorns here, and some of them have a raised areas on the inside of the feedhorn. Also The C band probe on all versions of the corotor (not wideband), extends almost to the end of the feedhorn. See attached pic. View attachment 94558
Click to expand...

What is the depth of the probe measured from the lip of the feedhorn? I need to dig one out of the shed, but I thought that it was at least 1 1/2".

In consideration of a cap mount design rather than an insert type, could everyone also post the OD (outside diameter) of the feedhorns? I know that some of the LNBFs have a ridged lip, that could throw a curve ball at this approach.

The tip of the probe is just about flush with the end. You could counterbore your mandrel a minimum of 1.25" dia. for clearance, but you would still have to deal with those ribs inside the feedhorn.

A design idea might be to have the laser diode/battery in the body of the "puck" outside of the feedhorn but have a hollow 3 point spring loaded or turn screw cam type grabber on the inside of the feedhorn that holds the puck centered securely? THis would accomadate the various ID's without the need for fitted rings or obstructions in the mouth of the feedhorn or even taper issues. Just a thought.

To recap the thread so far:

3. The maximum ID at the feedhorn lip is 2.56" minimum is 2.25". This would only be considered if the laser unit was to be recessed into the feedhorn throat.

I am thinking that the laser unit might sit into the throat slightly (.25") or should it be flush?

Of course we will affix the warning stickers about not doing stupid stuff with a laser...