long_time_DNC said:
I will likely watch it just to see if they can redeem themselves from the (mostly) disastrous mess they made out of season 3...
Click to expand...

Do you mean the mess they made of season 2?

I skipped season 1 because of comments made here, and then started by binge-watching season 2 on demand. Once they put season 1 on CBS for free, I recorded and watched those. Well, in retrospect, both were pretty bad. Anachronistic star ship; gigantic inter-dimensional water bear (?) that kills everybody until you show sympathy, the non-canonical spore drive, loathsome episodes with numerous torture scenes, treasonous acts, or redeeming acts inexplilcably regarded as treason, and in general the most implausible story lines you could ever imagine.

I can think of many reasons to avoid this series. But the name is Star Trek, so I contemplate sending more money after bad. Maybe I'll just wait until all seasons are released on CBS and look at it then. But my TV's may not physcially survive me watching this stupid series (because I could throw things at them).
Reactions: Howard Simmons

Pacific Northwest, where it rains a lot...

TheKrell said:
Do you mean the mess they made of season 2?

KAB said:
Because it was bad on every level.
Click to expand...

It's only your opinion. They also had bad opinion's about Manifest and they canceled it and then Netflix brought it back.

KAB said:
Because it was bad on every level.
Click to expand...

I enjoyed it. Idk. Not everyone did.


Not everyone enjoyed seasons 1 and 2 either.


Generally if I enjoy a show I follow it.
Reactions: dfergie

If you want more traditional TNG Trek, you could try "Lower Decks".
Reactions: Zookster and Derwin0

I liked the concept of season 3, of the Enterprise going so far into the future. They did a good job of world building and laying the groundwork for good stuff to come. The biggest WTF? moment in season 3 was temporarily making Tilly Number One. But I see that as necessitated by the show's general failure of better developing the bridge crew members' characters (until they are about to die or leave or have a breakdown or something). They simply had no other featured characters to put in that role, though obviously any longtime bridge crew member would be more in line and deserving than Tilly.

Anyhoo, it's still a great ride with excellent visuals and production values. I am re-watching the entire season 3 in preparation for season 4.
Reactions: TheKrell and TRG

Pacific Northwest, where it rains a lot...

Best part of S3 was the 2-parter with Phillipa (and better yet, the Guardian of Forever). Seeing what was left of Starfleet and what had become of the Vulcans and Romulans was interesting as well. Other than that, meh...
Reactions: Foxbat and Howard Simmons
S

And, apparently, Netflix and CBS have resolved their legal dispute.

Works something like this. Netflix pre bought, apparently, 7 years of STD outside the USA/Canada. The payment was apparently large enough that it covered production costs plus a tidy profit for CBS, such that whatever it made in the USA, plus a separate deal with Bell for Canada, was gravy.

Netflix was presented with STD, and has been complaining and threatening to sue, because the show is so bad.

Apparently they have resolved their issues, STD season 4 will not be on Netflix, and the previous 3 seasons will leave it at midnight PT tonight.

Paramount Plus, which is currently legally available in only 25 countries, will have all four seasons “sometime next year”. The separate Canadian deal remains in place.

IMHO, this probably means STD is not long for this world. CBS certainly won’t want to spend its own money on production of future seasons.
Reactions: DialgaChampion

Star Trek: Discovery is leaving Netflix tonight before heading to Paramount Plus

The series lived on Paramount Plus (fka CBS All Access) for US viewers and on Canada’s CTV Sci-Fi Channel, but the move will bring old and future seasons of the series under a single streaming umbrella for folks outside of those regions. Season 4 of Discovery had previously been set to debut on Paramount Plus in the US, CTV Sci-Fi Channel, and on Netflix elsewhere on November 18th.

The show will leave Netflix at 12AM PT in regions where it had previously been available to stream. (It will remain on Bell Media’s CTV Sci-Fi Channel and stream on the Crave in Canada.) All seasons of the show will become available to international viewers in 2022, the company confirmed to The Verg
Click to expand...

Not surprising that they want to get their content under their own Streaming platform globally, with their plans to expand it.
Reactions: N5XZS and dfergie
K

Season 4 started today. I'll be waiting for all the episodes to be available.
Reactions: reubenray and TheKrell

klang said:
Season 4 started today. I'll be waiting for all the episodes to be available.
Click to expand...

Watched it. I enjoyed it as usual for me, although I do have a few nitpicks that I’ll withhold until others have a chance to watch.
Reactions: Foxbat

msmith198025 said:
Watched it. I enjoyed it as usual for me, although I do have a few nitpicks that I’ll withhold until others have a chance to watch.
Click to expand...

Just put your comments in a spoiler, like this. 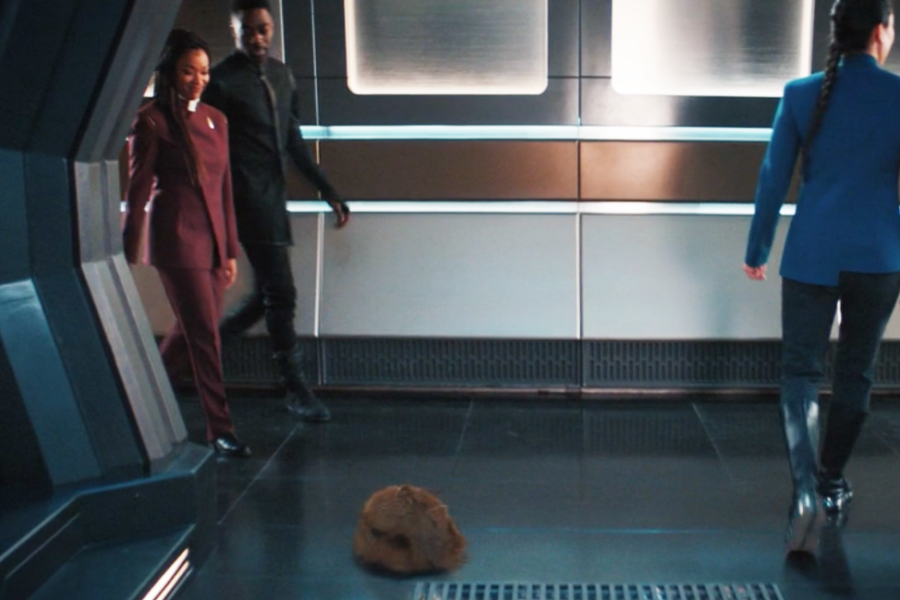 I have finally given up hope for this show. Too "woke" for me. Just no fun at all. Can't stand most of the characters, except for Book.
Reactions: SamCdbs

Overall a solid episode. My biggest issue is they keep putting Tilly in situations she clearly doesn't belong. Why don't they bring up a new chief security officer for situations like this? Burnham, as captain, shouldn't be the front line for every potential combat situation.
Reactions: norman881, Ronnie- and TheKrell

Zookster said:
Burnham, as captain, shouldn't be the front line for every potential combat situation.
Click to expand...

Yup. Star Trek has from the beginning had their starship captains solve every problem themselves, usually in person. I think TNG was the most realistic in having Picard stay on board occasionally, while others were sent on an away team.
A

Common phrase in every version. "It must be some kind of".

2 episodes in to new season, had to stop or I would watch them all ...
Reactions: Ronnie-

dfergie said:
2 episodes in to new season, had to stop or I would watch them all ...
Click to expand...

The latest one was excellent and classic trek imo.
Reactions: TheKrell and dfergie

msmith198025 said:
The latest one was excellent and classic trek imo.
Click to expand...